On the Run: At Traben – Trarbach On the Mosel

Today we ventured out to another of the wonderful villages along Germany’s Moselle, the ancient town of Traben-Trarbach. As part of our “On the Run” series of stopovers across Europe, this historic and picturesque spot is but one of the “must see” attractions within the Mosel wine region. A little less “touristy,” and a mysteriously fascinating, we found a few new “favorite spots” for day excursions.

Traben-Trarbach is a village along the Middle Mosel in the Bernkastel-Wittlich district of Rhineland-Palatinate. As traditional as any traditional German town, it is truly one of the gems of the region – especially given its less commercial overtones. Located about 40 km northeast of Trier, and roughly 60 km southwest of Koblenz, Traben-Trarbach is at the center of one of the most famous wine growing and producing regions in the world. And like all such towns, a place imbued with historical significance. 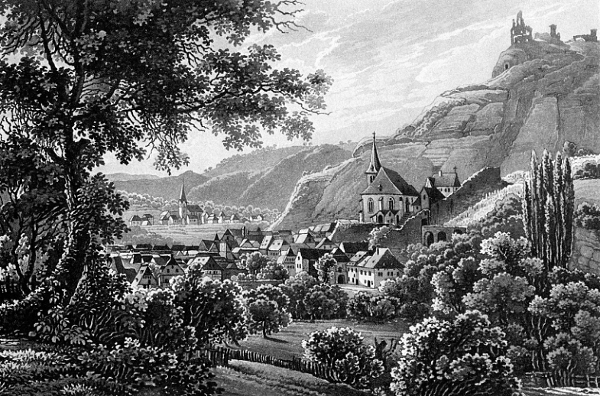 A Lithograph of ancient Traben - Trarbach

As early as 830 AD, the twin cities of Traben and Trarbach were mentioned in the history of this region. Like neighboring  Bernkastel – Kues, a castle keep looks down upon the river and town below. Wars and rumors of wars still echoing within those castle ruins, and along the steep hillsides and vineyards surrounding the place.

By the time Grevenburg castle was built in 1350, this area had become a vital part of this region of what was an important independent territory of the Holy Roman Empire. What remains now of the fabulous castle is but a shard overlooking this precious village. In more modern times, the two towns were combined in 1898 when a bridge across the great river was built, connecting Traben and Trarbach at last. Interestingly, the town was one of the two to have electric streetlights rather than the old gas lamp type, the service back then provided by none other than the Edison Company.

Our journey today carried us first to Traben and the more modern shops along its narrow streets, and a very nice and affordable hotel restaurant, Restaurant Ernst Ochs in the Central – Hotel – Traben. Sure proof, as always, that the local people know where to eat – entering this upscale but rustic eatery, we found only a very few tables open. As it happened, the owner was taking lunch at the same time we were, and we had the opportunity to chat. 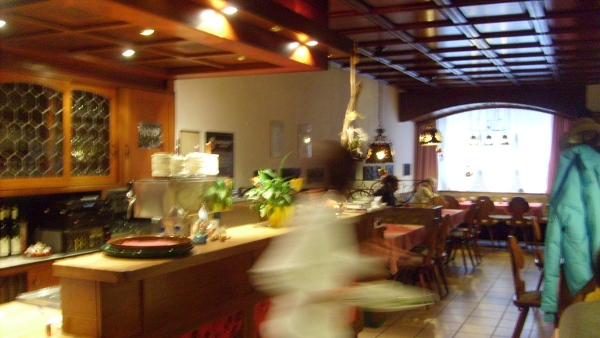 Proprietor Iris Gesser and her staff seemed not only well acquainted with the local lunch crowd, but more than willing to make new friends from (well, not so very afar as it turns out) other villages. We talked about the hotel, the season, and the fantastic traditional menu her restaurant offers. Despite making new friends, our feelings were unhurt by the superb and inexpensive traditional German cuisine here. If you’ve never traveled to Europe, €17 for a big lunch might not sound too cheap – but I assure you it is. Coffee, sparkling water, salad, main course – $20 – that’s a bargain even if the food is not fantastic. But ours was perfectly cooked. 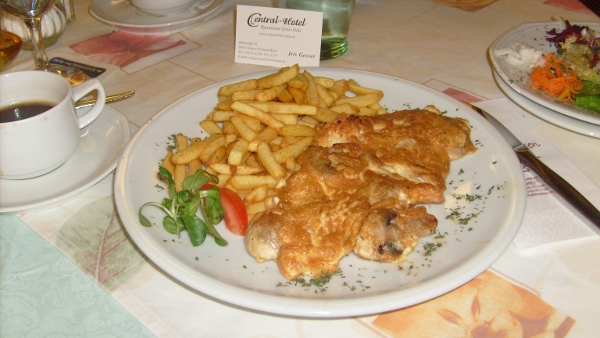 Over the River and Through the Gate

Onward we walked made a bee line towards the Moselle River bridge, past a few shops, stopping to buy some gloves and a hat for Mihaela and I – the seasonable cold beginning to whip through the river valley already. The river bridge is the perfect vantage point to view both sides of the village – and for a photo op too, except today was a bit too overcast. Regardless, the river boats, the swans, an the panorama of the village were inspiring – as you can see in the image below. 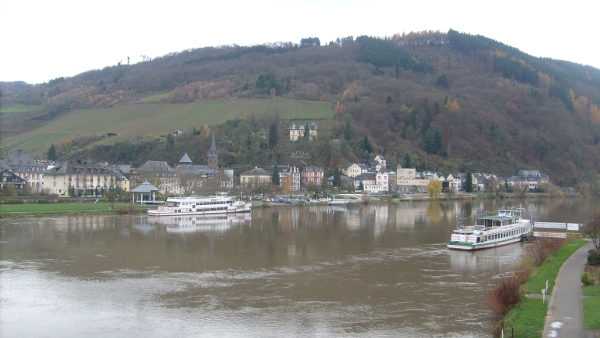 Looking across the Moselle at Trarbach

Off season visits to such little gems sometimes afford a superb opportunity to discover the people of these places. What I mean is, there seems to be more time when places are not so busy. As an example, on a previous visit to Traben – Trarbach in the Summer, we missed altogether what has to be the coolest restaurant and stopover in any of the Mosel villages, Brücken – Schenke – the most quaint, cool, and friendly establishment we’ve seen in some time. This weingalerie, cafe, and restaurant sits above the entry gate into Trarbach, at the end of the bridge from Traben. 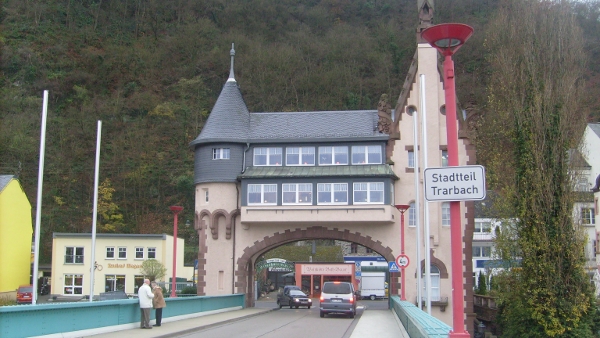 You know there are just some places where you not only feel at home, but the spot is just so inviting and cool – you know, like that aunt and uncle’s lake house – just more fun and cool than your ordinary haunts. Well, that’s is what Anita Caspari’s wonderful venue makes guests feel – just glad to be there. I cannot imagine a better setting than sitting literally atop all the passer’s by, with a near 360 degree view of all this village has to offer. But the best part of Brücken – Schenke turned out to be – you guessed it – the people who run the place. I used the “aunt and uncle” metaphor before – well, that is what Anita and her staff really made us feel. And we had already eaten!

No Time To Say Hello, Goodbye

Coffee and a superb local schnapps, and we are off again, our half day now drawing nearer to evening. We bid farewell to Anita, me personally kicking myself for not having met her during the Summer – we whispered a promise to make this one of our regular spots. Down the winding stairs and outside we backed up to give you a shot of the restaurant and the street we are headed down (below). Like most villages, the side streets are lined with shops, eateries, and the people generally live above their places of business.

The shops of Traben – Trarbach hold their own special character, trendy yet somehow with a local flavor. It is always fascinating to observe how things blend in within these small villages. Touristic points of interest mingling with the obvious ancient flavor and character of places – and Traben – Trarbach is no exception. In fact, the place may even have its own set of cultural rules? What was the second largest wine production location on Earth, is now a hidden jewel of a vacation spot. 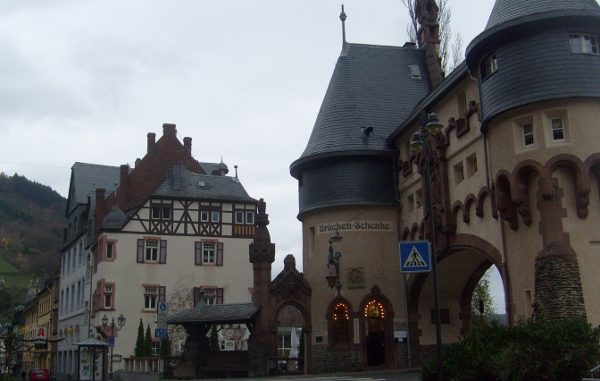 Brücken - Schenke and the shopping streets of Trarbach

Somehow the 100’s of stages of existence for this place are readily apparent – like the once grand Casino (we will reveal in a later story) – and of course the castle high atop the town – and the lonely mansion that sits across, bespeaking of a more modern age of gilded splendor. The chill in the air, and a typical overcast Fall day sort of doomed our photo opportunity for the late afternoon.

We did however shoot some video along the path for your enjoyment. But, we had to leave for another day our investigation of the Mittelmoselmuseum, the mysterious Huesgen house (PDF) (a wine history you won’t believe there), of course the castle, Mont Royal Fort, and a dozen or more historic sites – not to mention the restaurants and cafes – boat rides – you get the picture I guess. Traben-Trarbach is actually a place one hates to leave – a hint as to why we never think of leaving the Mosel region for long.

Until later, we hope you enjoy the gallery, the video, and our little short take On the Run.

Trends Say Americans Guarded Over Travel 2022
27 Inspirational Travel Quotes to Fire Up Your 2022 Travel Bug
Omicron Surge Stops the New Year’s Eve Music in Greece
Odd Christmas Traditions Around the World
Previous: Got a Crazy Travel Story? Then You Could Be a Winner in the “Mile High Text Club” Contest
Next: Bohemian City Tour Shows Off Three Cities