The Mystery of Monastiraki: A Search for the Most Sacred

King Minos guarding the gates to the underworld

King Minos guarding the gates to the underworld

On the island of Crete many mysteries wait patiently their discovery. One place that comes to mind when I think of misunderstood Minoan Crete is the site of Monastiraki, what was once a great palace overlooking the Amari Valley, south east of Rethymno. What you are about to read lends credence to the theories of those who have passed down legends of Cretan mysticism, tales of paranormal interest in the island, and of a greater power than all others.

For those unfamiliar, the Palace at Monastiraki was completely destroyed at the end of MM IB at the same time as the first palaces of Phaistos and Knossos. While the Minoan name for this important center is as yet unknown, the archaeological evidence today points to the fact the city was extensive with some palatial features. The site was abandoned, more or less, after a fantastic blaze destroyed the city. I mention the fire’s intensity for the theory that a gigantic store of olive oil beneath the palace added to the intensity of the flames. Very little is known though, where the purpose and the seat of this lesser known Minoan center is concerned. 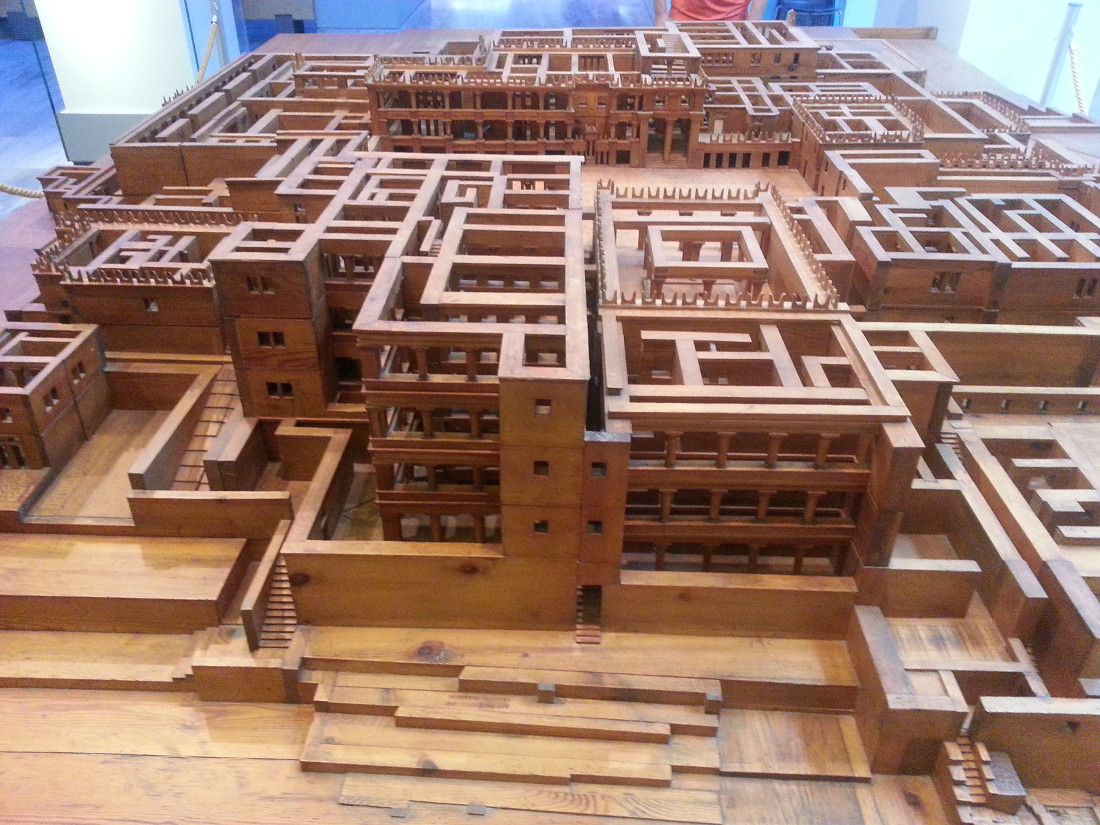 Wooden model conception of the Palace at Knossos in the Heraklion Archaeological Museum – Courtesy Ijon CC 4.0

Two facts peaked my intensive interest in Monastiraki. First, the limited excavations done by the German occupiers of Crete during World War II are a curiosity, especially given the fact their excavation was based on the notebooks of the legendary and adventurous British archaeologist J. D. S. Pendlebury. Whatever was in the famous Archaeologist’s notes may well have had something to do with his execution by the Germans after his capture after the famous Battle of Crete. And now that I have your attention. I find it doubly curious today that local villagers refuse to allow the excavations and the overall site near those German digs to be photographed. In fact, I am told access to the site is restricted by those same villagers. This prompts the question; “What were the Nazis looking for?” Of course it’s been noted that Pendelbury was shot as a spy, but he was a British officer who died a hero of Cretans. Some chroniclers of his life attest to him being akin to the famous creator of James Bond, Ian Fleming. But, it seems to me a man the Cretans admired so well would have been more use to the Nazis alive than dead. Of Pendlebury one chronicler wrote:

“..[he] knew the whole island like his own hand, spoke Greek like a true Cretan, could make up mantinadas all night long, and could drink any Cretan under the table.”

Returning now to more recent excavations have been carried out by Athanasia Kanta, who describes this Middle Minoan site as a palatial centre on account of the lack of Minoan era housing nearby. Evidence of wide-scale agriculture and animal husbandry being practised as well as the manufacture of wool and cloth have been discovered at Monastiraki, but the discovery of hundreds of seals being  found on the site fuels my imagination. While it is not yet known if Monastiraki was the seat of a local ruler who controlled the Amari Valley, which some experts suggest, the sheer size of the site (over 300,000 square meters) is further evidence there may be a deep unknown trove of understanding nearby. This sends my head reeling back to the Nazi occupiers, and childlike imaginings of some “Indiana Jones” secret Hitler’s henchmen might have been looking for. After all, digging up ancient Minoan artifacts while Field Marshall Rommel’s panzers waited air cover from Crete, it seems unusual to me. 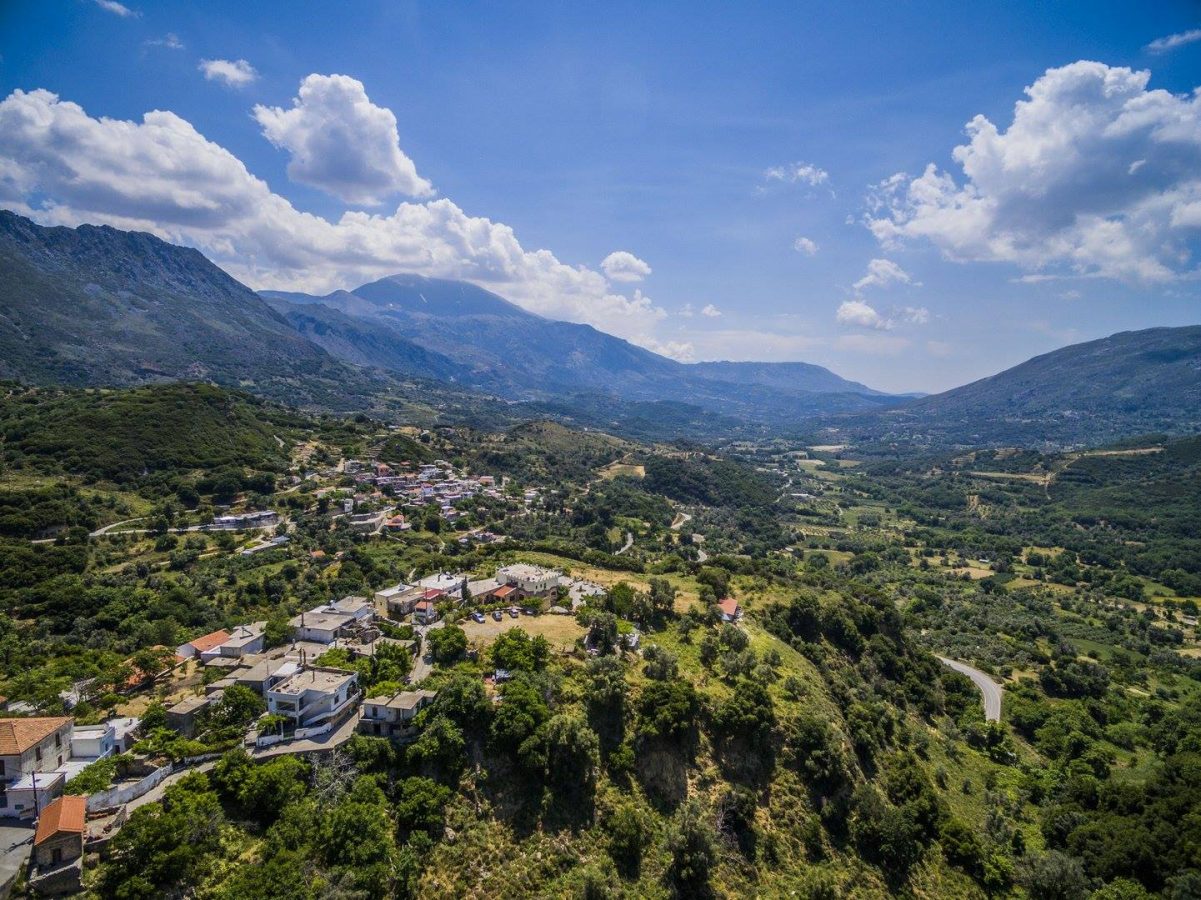 The town of Thronos, which is itself built on top of the ruins of ancient Syvritos. This is looking down toward ancient Monastiraki – Courtesy our friends at Aravanes Tavern

Also, the fact it was Pendlebury who made the most extensive study of what have come to be known as “refuge sites” – this adds another dimension to the overall curiosity over Monastiraki. It was Pendlebury who first mapped and Karfi, and his work has now led to the discovery of over 120 prehistoric examples of mountain-top refuges on Crete (Wallace – Cambridge 2007). Whatever compelled the Germans to focus so intensely on Pendelbury’s notes can only be deduced from more recent study of these “refuge sites” – as the Wallace implies. Her study delves into aspects of Minoan antiquity which have heretofore gone unnoticed. The idea of “visual symbolism” is something I find particularly fascinating. But this is a subject for deeper study. What is most appealing on the introductory level is the obvious believe the Minoans held some deep secret modern humanity only had an inkling of. And maybe this is the ultimate truth of all inquiry even today. 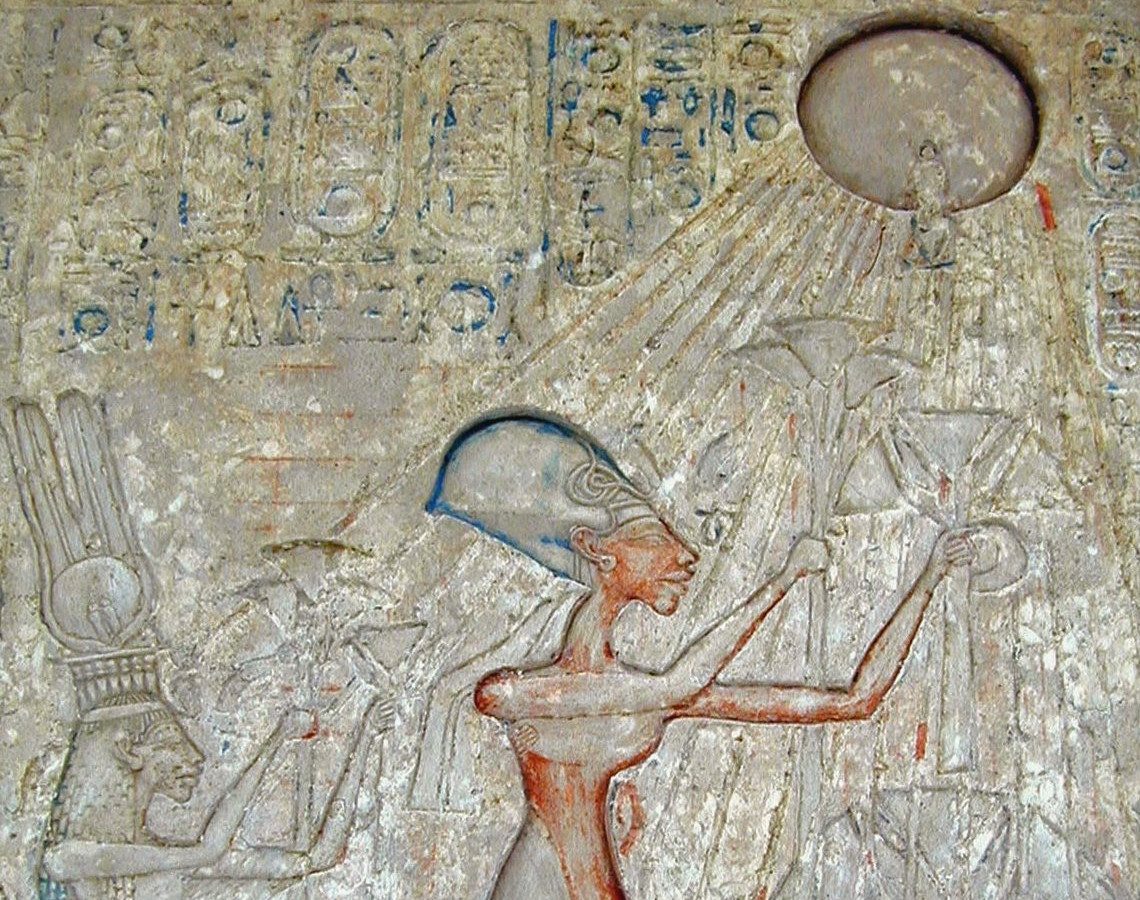 Pharaoh Akhenaten and his family adoring the Aten – Public Domain

Finally, while it may seem a stretch to blend in Spielberg film heroes like Indiana Jones here, the fact that  J. D. S. Pendlebury was also the director of excavation at the ancient Egyptian site of Tel El-Amarna bears mentioning here. You see, Tel El-Amarna sits atop the ruins of the capital of the Pharaoh Akhenaten (father of King Tutankhamun), a new capital city that was dedicated to his new religion of worship to the Aten. Yes, I know I have once again tweaked your curiosity with this tendril of religiosity. The uniqueness of the Aten worship period in time of the pharoes comes from the fact Akhenaten promoted monotheism – as Aten was worshipped as the sole god entity rather than the Egyptian pantheon before and after Akhenaten’s time. It is here this study of Monastiraki converges with the broader spectrum of history. The official installment of the Aten as Egypt’s sole god, and what is known from the Egyptian worship of the time, is demonstrated in the so-called Great Hymn to the Aten, from which I quote a single all too familiar verse:

How manifold it is, what thou hast made!

They are hidden from the face (of man).

O sole god, like whom there is no other!

Thou didst create the world according to thy desire,

Whilst thou wert alone: All men, cattle, and wild beasts,

Whatever is on earth, going upon (its) feet,

And what is on high, flying with its wings. 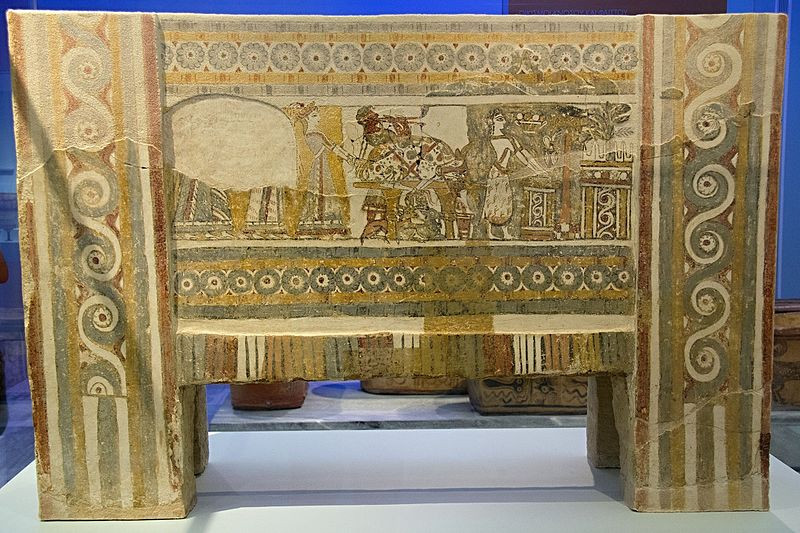 As I suggested, this story and this research is far too complex and way too incomplete to discuss here. I will leave the reader with one more tidbit which may enlighten us as to the German interest in archaeology on Crete during World War II. The renowned Egyptologist James Henry Breasted considered Akhenaten to be the first monotheist and scientist in history. Cross referencing with the poem above, we see a direct mention of the underworld King Minos had dominion over. But to leave the reader here wanting for more illuminated history tells of a pageant held by Akhenaten which supposedly featured representatives from Keftiu, or the island in the midst of the “Great Green” (Akhenaten: Son Of The Sun – Moyra Caldecott). Finally, the time of Akhenaten is marked by another similarity shared in Minoan culture, that of the role of women. You see, Akhenaten’s wife Neferneferuaten Nefertiti, is many times depicted as equal in stature to a King, even smiting Egypt’s enemies, and worshipping the Aten in the manner of a her husband. And how about the fact the famous Hagia Triada sarcophagus (above), which depicts a Minoan funerary procession, being from the time of Aten and Akhenaten? I wonder if my endless coincidences here strike each reader?

Now isn’t it amazing to wonder at virtually undiscovered places like Monastiraki? What if all the legends are true? What if, buried somewhere beneath an earthquake shifted landslide on Crete, the mystery or treasure Hitler’s archaeologists could not find still lies hidden? What if this resilient magnetism we feel on Crete emanates from an unsuspected source? I imagine Zeus really being born high up on the Lassithi Plateau, growing up near Thronos, and maybe a Greek god with a big “G”…..