The Guardian News Datablog has come up with an interesting way to display travel warnings issued by the Foreign and Commonwealth Office (FCO), using Google’s Fusion Tables.  “The world according to Britain’s diplomats” gives you a visual picture of the world’s most troubling travel hotspots, at least according to the UK government.

The most dangerous areas, such as the Philippines, are marked in dark reddish color (perhaps like fresh blood), whereas less volatile regions are displayed in lighter shades of red or even pink. You will need to click on the actual country to view more information in order to avoid jumping to conclusions. 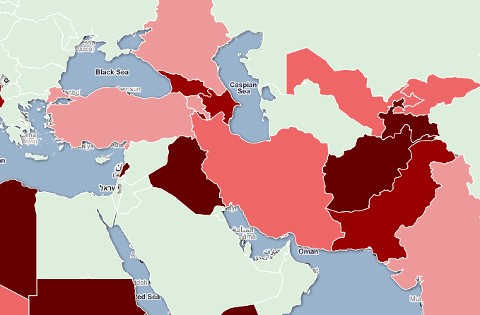 For example, the entire Russian Federation is pink, but that does not mean all of Russia is unsafe.  Furthermore, there is no visual distinction between Bahrain, a nation fraught with political unrest and foreign military incursion, and Japan, a country recovering from a devastating earthquake.

Clicking on the hotspots brings up a brief summary of the travel advisories.  For example, clicking on Venezuela displays “Against all travel”.  It then provides additional information, which in the case of Venezuela, references the H1N1 Swine flu outbreak in certain areas.  Others will say “no travel restrictions” or “all but essential travel”.

The FCO’s criteria differ from other countries, such as the United States, which also issues similar warnings.  For example, the FCO is not completely against British citizens visiting Iran, listing it as “all but essential travel”, but the US would recommend against traveling there because of the absence of a US embassy or consulate.

For a complete description of the map and an explanation of the criteria and methodology used by the FCO, visit guardian.co.uk.