Fly Skycouch, Who Would You Cuddle?

Unless you want to cuddle sheep, a survey by Air New Zealand for their Skycouch cuddle class may give you some ideas into what (or who) is cool to cuddle.

Female passengers in the US no longer find Hugh Hefner that cool, going for Johnny Depp (38%) and George Clooney (36%) instead; while US passengers would rather cuddle with Orlando Bloom (31%), Prince Harry (18%), Prince William (14%) and Robert Pattinson (11%).

The shocking results come from male passengers in the US, who favor Sarah Palin (24%) as a cuddling partner, before Kim Kardashian, Mila Kunis and Beyoncé. But the top favorite remains Jennifer Aniston (47%), followed by Megan Fox (37%) – maybe they should consider a political career? In the UK, male passengers would cuddle Catherine Zeta-Jones (40%) and Emma Watson (30%).

Skycouch is already famous for its tongue-in-cheek approach to marketing. If you don’t remember their #cuddleclass sheep twins Mason and Jason, here’s a brief reminder:

It is not the first time Skycouch uses celebs in advertising: aside David Hasselhoff, Kristina and Karissa Shannon have already graced (or scared, still a matter of debate) Mason and Jason with their presence. But regardless the approach to marketing and advertising, the point of the matter is: Skycouch delivers. 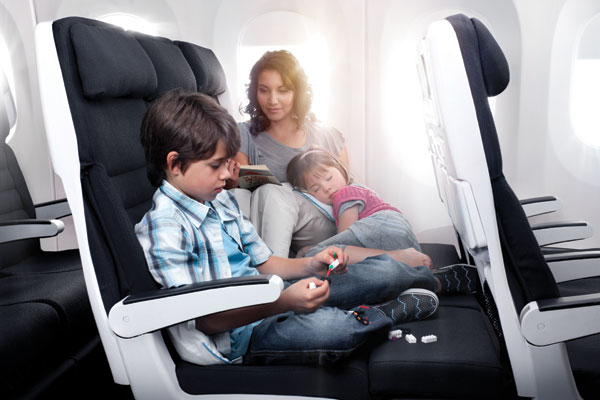 Skycouch is indeed the first in its class, and a novel idea, that brings value to passengers flying long distance. Although couples who want to use it still have to pay for a third seat, this is still a more affordable proposition than flying first class. But for families flying with a child, the option is a life saver. The “couch” can be anything from a resting place to a playground.

Skycouch is still at the beginning, being available only for 777-300 planes, flying between Auckland, Los Angeles and London. Upgrades are available for exisiting customers on the official Air New Zealand Skycouch site.

Ideas to Make the Most of Your Visit to Phuket
Trends Say Americans Guarded Over Travel 2022
27 Inspirational Travel Quotes to Fire Up Your 2022 Travel Bug
Omicron Surge Stops the New Year’s Eve Music in Greece
Previous: Days of Croatian Tourism Conference Kicks Off in Sibenik
Next: Starwood Hotels & Resorts: The Luxury You’d Expect