It all started yesterday in Split, with the opening of an exhibition dedicated to the Emperor Diocletian at the Split City Museum. Then later, hundreds of residents attended a procession on Marmont street, that culminated with the Emperor greeting all citizens on Peristyle square. After concerts and other events, the day ended with Diocletian’s dinner in the Palace substructures. Yes, Split loves its heroes, and Diocletian is one of the most beloved public figures who once ruled these lands. 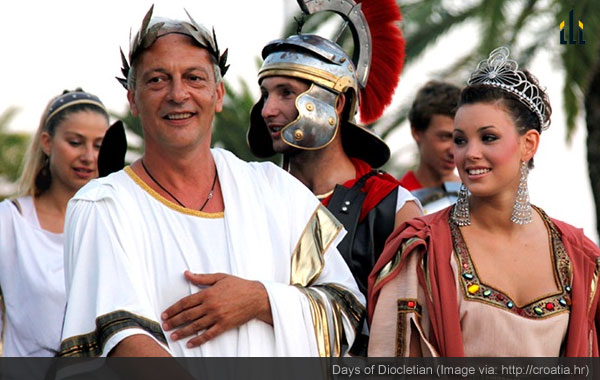 No other event in Split is welcomed with more enthusiasm by young and old than the celebration of the Days of Diocletian. The whole city participates in the reenactment of a glorious era, witnessing the Emperor and his family walking the city again. Roman legions align on the streets and squares for the weekend, and welcome their ruler with fanfares, drums, Roman music. The air is filled with laughter, songs from illo tempore, echoes of swords and battle. The crowds cheer the Emperor, applaud the street entertainers, sing and party together.

This is a memorable time for travelers who happen to visit Split in August: a glimpse of local history with authentic flavors. Today, at the Night of the Tetrarchs, crowds will witness gladiator fights, and the formation of the Roman legions, after they first meet Diocletian and his family. The day ends with rock and cello concerts.

Tomorrow, Sunday 19, kids are entertained by children’s folklore groups, and get the chance to spend the day in a Roman style kindergarten.

The Days of Diocletian end Monday, August 20, 2012, with a third, and last procession, followed by gladiator fights, and the Emperor’s departure, after the children’s choir Srdelice performs Good-bye Emperor. The party continues with 500 portions of authentic Roman stew, that will be shared with citizens who come dressed in togas. The food is sponsored by the Mayor of Split. Finally, after two concerts, the Emperor will leave on his galleon from St. Nicholas Pier.