Research and Markets have recently published the Ukraine Tourism Report Q4 2010, which reveals that the medium-term macroeconomic outlook across emerging Europe has improved considerably since the beginning of H209, when Central and Eastern Europe (CEE) was facing the worst macroeconomic crisis since the post-Soviet transition.

In 2009, tourist arrivals in the Ukraine dropped by 12% year-on-year (y-o-y), and for 2010, BMI forecasts a growth of 7% y-o-y in tourist arrival numbers, a jump from 21.9mn in 2009 to 23.3mn. As the largest country on the European continent, Ukraine is bordered by the Russian Federation to the east and northeast, Belarus to the northwest, Poland, Slovakia and Hungary to the west, Romania and Moldova to the southwest, and the Black Sea and Sea of Azov to the south and southeast respectively.

This geographic location brings a number of CEE travelers in the country via road and rail, with few air travel entries. In the future, transport via road is forecast to substantially outrace rail travel, mainly due to visa liberalization between the EU and Ukraine. EU citizens no longer require a visa to enter the country for stays under 180 days. Additionally, Ukraine’s rail connections with the rest of Europe and Asia are in need of development. 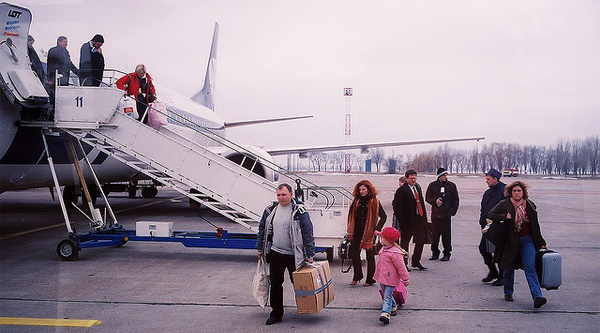 For 2010, the country expects a significant y-o-y growth, as it is set to co-host the 2012 UEFA European football championship with Poland. The event is considered a key driver for the country’s tourism industry for the duration of the championship. The final decision of whether the country will host the championship will be made in 2011, so Ukraine has little time to improve the Olympic Stadium in Kyiv, airports and other infrastructure. According to the report:

There is serious danger of Ukraine being behind schedule as investment sources for much of the required infrastructure are difficult to pinpoint. Of particular concern is the construction of hotels, with reports on the ground highlighting the inadequate progress and even rumors that some visitors are to be housed in tents.

Research Claims Americans Plan to Visit Europe Despite Ukraine Conflict
Ukrainians Travel Visa-free to the EU from June
Hike the Snow Mountain: Hoverla in Ukraine Is a Mountaineer’s Dream
Georgia and Ukraine Closer to Visa-free Travel to the EU
Previous: 2010 Best Family Skiing in Eastern Europe
Next: Fraser Residence Opens In Heart of Budapest