STR Analyzes the Impact of Terrorism on Europe’s Hotel Industry 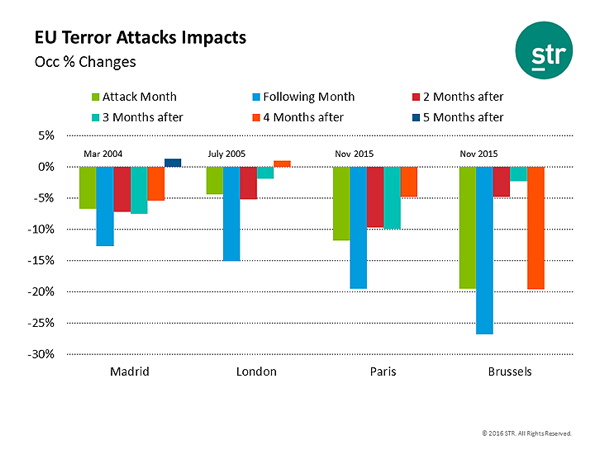 STR analyzed four instances in which a major European market was attacked by terrorists, beginning with the 2004 train bombings in Madrid, Spain. Other markets included in the analysis were London, England; Paris, France; and Brussels, Belgium.

Terror attacks in those markets also were found to have a greater impact on occupancy levels than on average daily rate (ADR).

The best example came in London in 2005. Hotels experienced average year-over-year rate growth of 3.2% in the three months following the 7 July attacks on the city’s transit system. Occupancy, on the other hand, dropped 15.1%, 5.2% and 1.9% in the subsequent months before rising 1.0% in November.

According to STR analysts, hoteliers typically do not attempt to recapture occupancy levels with lower rates following a terror attack as tourists are likely to avoid the market regardless of price.

After the March 2004 train bombings in Madrid, the market’s occupancy fell 12.7% in April in comparison with the same month the previous year. May and June then resulted in decreases of 7.2% and 7.5%, respectively. The trend began to shift in July when occupancy was down 5.5%. The market’s ADR trended in the opposite direction with a 7.4% decrease in April followed by an average decrease of 13.5% over the following three months.

The three-month recovery pattern for occupancy repeated in Paris following the November 2015 attacks. After three months of decreases averaging 13.1%, March 2016 produced an absolute occupancy level of 71.7%, which was just a 4.8% decrease from the same month in 2015. Paris’ ADR fell 1.8% on average between December and February before climbing back to nearly flat performance (-0.4%) in March. The occupancy and ADR combination led to a 5.2% year-over-year decline in revenue per available room (RevPAR). This was the slightest RevPAR decline Paris has experienced since November 2015, indicating that Paris’ hotel market may be in the early stages of recovery.

STR analysts note that in the case of Brussels it is too early to draw a full analysis from the attacks in March. However, Brussels was also heavily affected by the November attacks in Paris, so data through February may indicate this market’s recovery patterns. Following the lockdown the Brussels government enacted from 21-25 November, Brussels’ occupancy declined by double digits for 16 consecutive days, falling by as much as 62.6%. Between November and January, Brussels posted an average monthly occupancy decline of 17.0%. Then in February, occupancy was down just 2.3%. ADR during this time fluctuated but grew in year-over-year comparisons for three of four months.

STR provides clients from multiple market sectors with premium, global data benchmarking, analytics and marketplace insights. Founded in 1985, STR maintains a presence in 10 countries around the world with a corporate North American headquarters in Hendersonville, Tennessee, and an international headquarters in London, England. For more information, please visit str.com.