The ceremony to launch Russia’s Sochi.Park, which will showcase preparations for the upcoming 2014 Olympic Games in Sochi, took place in London’s Kensington Gardens July 27th, the first day of the Olympics. Attendees included the Deputy Prime Minister of the Russian Federation, Dmitry Kozak, President of the Russian Olympic Committee, Alexander Zhukov, President of the Sochi 2014 Organizing Committee, Dimitry Chernyshenko and journalists that received an exclusive preview. 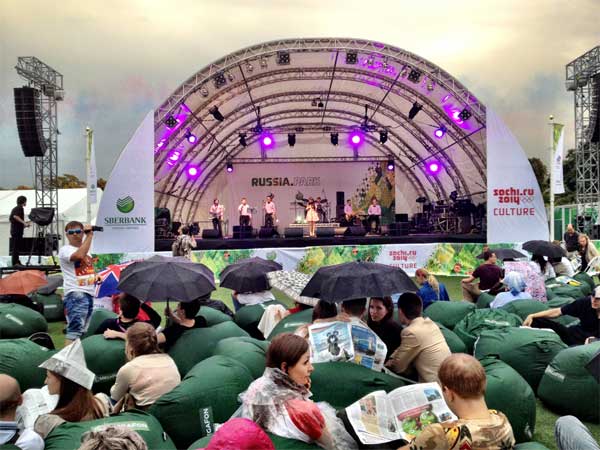 Sochi Park’s displays are designed to reflect Russian culture, traditions, sport and innovation, in line with the “Journey to Sochi” concept. As guests enter what is officially referred to as Russia.Sochi.Park, they are first shown a film about Russian culture in a “Visit Russia” themed area. Visitors then move to the “Krasnodar Region” area and learn about traditions specific to the region. There, they can also play interactive games, including a simulation of a “Formula 1″ driver. Visitors then move to themed area for international and national Olympic partners. Here, they can travel on a simulated train ride, viewing Russian landscapes through the “windows.” Guests can also enjoy a 3D “flight” along a bobsleigh track and even try curling.

A nearby screed displays information about the Sochi 2014 Games with stories about leading Olympic athletes. An innovative feature includes a glimpse into the future through an interactive experience called, “Sochi 2014: A 4 Dimensional Journey.” There, visitors see Sochi through the eyes of an Olympian, journeying across the Coastal and Mountain Clusters. Next, they visit the retail store for Sochi 2014 Games souvenirs.

Guests will also see several dramatic performances on the ice rink in Sochi.Park and a grand show called “Sochi: Small Stories of a Big City.” The show features 6 Olympic and 18 World Champion figure skaters including llya Averbukh and Tatiana Navka.

Deputy Prime Minister of the Russian Federation, Dmitry Kozak, stated that the park provides a unique opportunity for visitors to the Games in London to experience Russian culture and Russian sports history.

“Once the London 2012 Games are over, Sochi 2014 will pick-up the baton. We will try to do everything possible to ensure that Sochi.Park guests are given a lasting impression of Sochi, and genuinely feel as if they have been in a winter wonderland right in the middle of summer.”