News from Crimea this Summer speaks volumes for Russia’s internal and outbound travel market, as Crimea travel spots boast touristic gains. The economic tensions applied by western powers over Crimea’s return to Russia have had their effects. One travel operator, Coral Travel, laid it all out for FVW Media recently.

By most accounts, the political crisis has only “shifted” touristic flows, rather than having negatively affected them. Coskun Yurt, Vice Chairman of OTI Holding (ODEON Tourism), and head of its subsidiary, Coral Travel had this to say about the overall impact on tour operators in Russia:

“For the market, we expect a drop of 40% in visitors to European destinations, especially Spain and Greece, and of 10-15% for Egypt. The situation has slightly improved for Turkey and we now expect a fall of only 20%. For our tour operator Coral Travel, however, we predict a fall of only 5-10% in total, because we are strongly expanding domestic tourism within Russia.”

The devaluation of the rouble and the country’s sanction taxed economy, has really impacted tour operators and travel agents, not to mention hoteliers and restaurateurs in Russia. Rather than pressuring ALL the players in this market though, the leverage applied onto Russia will cause a secondary effect that may not have been intended. As smaller players are left high and dry without touristic numbers, this will only mean bigger tourism fish will seek to gobble up the hurting ones. According to Yurt, OTI is expecting to expand on its domestic holidays even farther. Packages to Crimea and the Black Sea are hot items for Russians seeking inexpensive holidays, and some reports already suggest Crimea’s numbers are up. Yurt estimates travel to the region will be up 30% over last year. 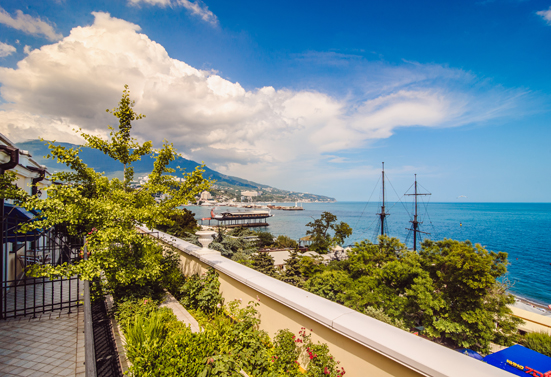 The luxurious Oreanda Hotel in Yalta – a week for the price of one night in downtown Paris.

Founded in 1994, Coral is but one of three Russian tour operators with over two million customers. According to the tour expert, some 25,000 agencies in Russia will likely be consolidated or acquired in the coming months. His company, besides being a leading tour operator, also has fingers in the travel agency and charter flights pies. OTI has eight hotels too, with five in Turkey including Xanadu Resort (top image),  and three more in Egypt. OTI has plans to expand operations into the rest of Eastern Europe, to add to the overall market potential.

OTI-ODEON announced only last month having been listed as one of “The Biggest 500 Companies in Turkey by Forbes. The firm has risen on the list in each of the successive 3 years to a current position of 107th. Earlier this Summer, Coral Travel was named Best Tour Operator In the World by the World Tourism Forum.