Travelers to Romania may some day in the near future view the marvel Romanian Orthodox People’s Salvation Cathedral (Catedrala Mântuirii Neamului Românesc), the infrastructure of which is now completed. Located on Calea 13 Septembrie in Bucharest, the cathedral will stands 120 feet tall, able to accommodate 5,000 of the faithful at once. 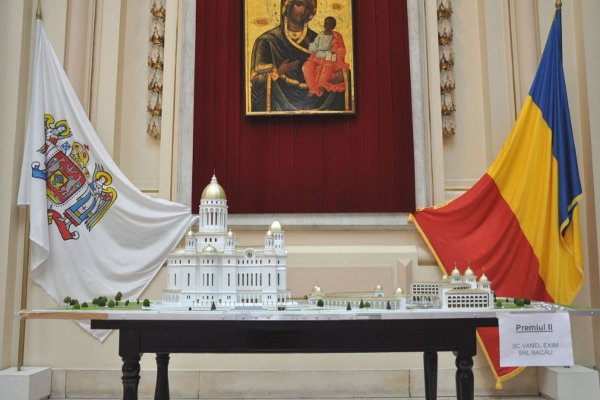 Planning models at the Patriarchal Palace

Despite having been the subject of heated debate in Romania, this marvelous work of architecture is none-the-less a beautiful tribute to Romanian construction and architecture. The new seat of the Romanian Patriarchate, the cathedral will be  a living work of architectural and engineering prowess that has already consumed some 55,000 thousand cubic meters of concrete and 13,000 tons of reinforcing materials to complete the current work.

While the original vision for a Romanian National Cathedral saw some 10,000 worshipers attending services, the reality of half that many is no less awe inspiring, and controversial too given the economics of Romania and all Europe today. The sheer massive scale of this project, one evident in the surrounding complex capable of accommodating 125,000 souls, exudes a sort of imperial excess not seen since the Austro-Hungarian Empire. Built at a cost exceeding €1 billion euro, poverty and austerity stricken Romanians simply must view the project with disdain.

Even despite the negative PR of the project though, Romanians have to feel proud that even in the light of staggeringly difficult times there, their capability to build such monuments is envy inspiring. Whether or not this marvelous cathedral is a true place of salvation for the Romanian people, or just a monument that resurrects Romanian pride in their own capability, it’s clear a lot of positive can come from what might otherwise be seen as an excess in time of need.

The video below shows the construction of this monument to Romanian ingenuity. A virtual tour of the completed work. The Orhtodox Church is asking for contributions for completing the work on this massive project. Please let us know your thoughts and ideas on this fascinating, if controversial project.