Red Square via our partners at Gelio Vostok

Share
Share
Tweet
Touristic flows to the Moscow region have increased by some 3 million visitors a year over the last three years, according to the First Deputy Chairman of the Government of the Moscow region, Olga Zubrilova. 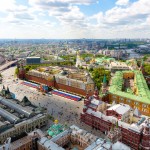 Red Square via our partners at Gelio Vostok

According the to the news, 2015 tourists amounted to 11.5 million persons, who attended the best events and points of interest. Zubrilova told Interfax:

“We have increased the tourist flow, due to the fact that we and exhibitions, and concerts, and various festivals. (…) 3 million people has increased the flow of tourists.”

The Minister of culture of the Moscow region, Oksana Kosareva also made note of the fact that every month of the year visitors stood in line for the most interesting attractions, adding; “This Year the movie, (…) theatre festivals, the festival of Pushkin in Viaziomy, it will go a few days, the Tchaikovsky festival in June in Klin, the film festival “Volokolamsk line”.