In June, the eyes of Europe will turn to Ukraine as the UEFA European Football Championship – Euro 2012 – kicks off across the country and neighboring Poland.
For Ukraine, 20 years following the end of the Soviets it is a chance to showcase what the country has to offer as it reaches an adult age.
Of all the host cities, the capital Kyiv (Kiev), will possibly be the most visible, hosting the final on July 1 at the newly reconstructed Olimpiysky Stadium.

So away from the games what is there to see and do in Kyiv?

A city of stark contrasts, it is best not to visit with any preconceived notions and take the city as it comes. Kyiv is bound to surprise you if you abandon ideas of its post-Soviet gangster background, it is a modern, cosmopolitan city with more than 100 museums and 33 theatres. Expensive late-model cars dominate the central streets and the streetscape is dominated by a mix of modern, old-world and monumental architecture.

How can you enjoy all the city has to offer with the hassle of not being a local?

This list is a good start. Here the team at hotel reservation website www.booked.net guides you to our pick of the top 10 sites to see in Kyiv.

Set in the impressive central city expanse that is Sophiyska Square, St Sophia’s Cathedral has occupied the site for 975 years. The cathedral is a world-famous and significant monument to an era of cultural prosperity under the guidance of the prince Yaroslav Mudry, otherwise as Yaroslav the Wise. On his initiative the Cathedral of St Sophia was founded in the 11th century and has become one of the most recognizable symbols of Kyiv. 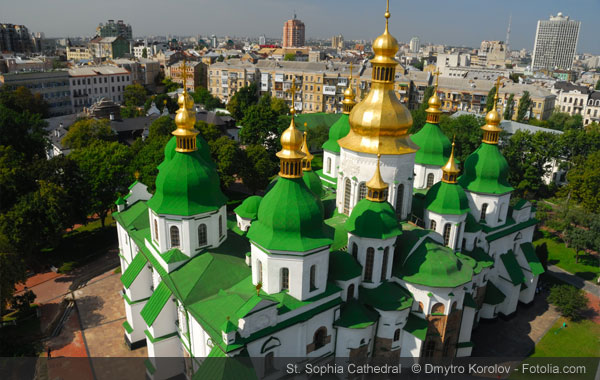 A popular venue for public events and concerts in the center of the city, Independence Square boasts heavy historical and political significance. The square is a depository of monumental in scale neo-classical Soviet architecture that continues along Khreschatyk Street coupled with recent additions such as the Independence Column. What’s seen at the surface is just the beginning, there are three levels of shopping under the square in the form of the Globus Mall. 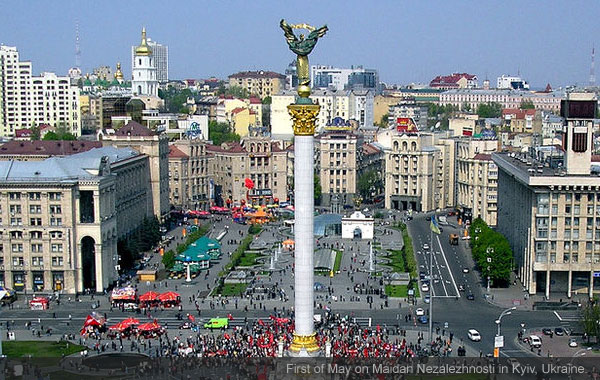 The most poetic of all Kyiv churches can be found at the top of the famed Andriyivsky Uzviz (Descent) Kyiv’s Montmartre. The almost 270-year-old Church of St Andrew was designed by prominent architect Bartolomeo Rastrelli for the Empress Elizabeth Petrovna of Russia and is a baroque masterpiece. It is lavishly decorated both inside and out and perhaps befitting its royal pedigree 1028 slabs of gold were used into gild the interior. 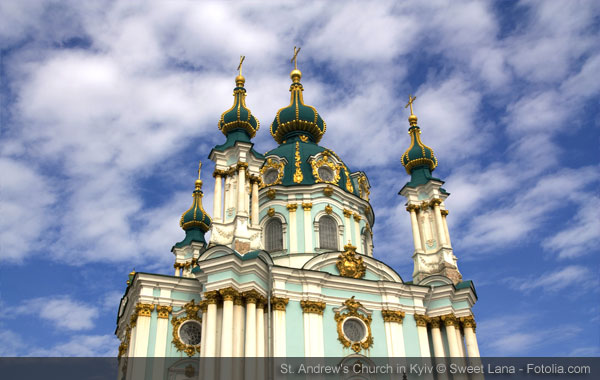 Stretching 1.2km from European Square to Bessarabska Square, Khreshchatyk Street gained its final shape in 1837, bombed to smithereens in World War 2 it became a depository for the neo-classical style of post-war Stalinist architecture – featuring huge buildings that stretch uninterrupted for hundreds of meters. Despite that background, today the street is thoroughly modern and is reminiscent of the type of boulevard you find in any large European city with a large number of shops, trade buildings, banks and luxurious restaurants. In addition, the boulevard has won a place in history serving as a base for the Orange revolution. 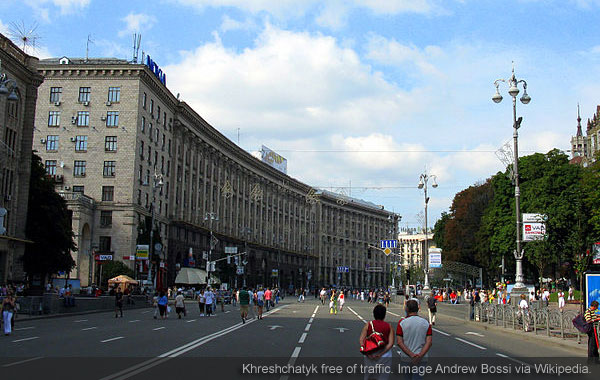 The mother cathedral of the Ukrainian Orthodox Church construction of the cathedral was initiated by Russian Emperor Nicolas I to commemorate the 900th anniversary of the baptism of Kievan Rus. Completed in 1882, its interior features mosaics on almost every surface that were created in Venice. Situated in the center of Kyiv – it is considered today to be among the most beautiful architecture in the city. 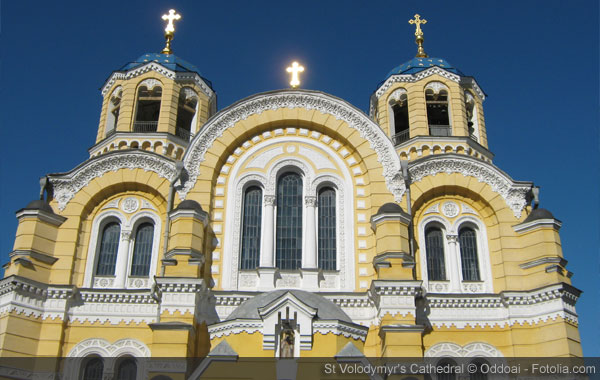 It is a labyrinth of towers, cathedrals, underground caves and tunnels and stone fortifications, which isn’t surprising since this has been a place of worship for more than a millennium. Kyiv Pechersk Lavra is a place of pilgrimage for many religions but has been the center of Eastern Orthodox Christianity in Eastern Europe since its foundation in 1015. Representing a large chunk of holy ground that dominates hilly area along the Dniepr River, from the point when Reverend Anthony settled in one of the caves it has evolved into the largest monastery in Ukraine. Covering more than 10,000sqm, Percherska Lavra is home to 100 unique constructions including 23 temples, six cave temples, and 36 altars. 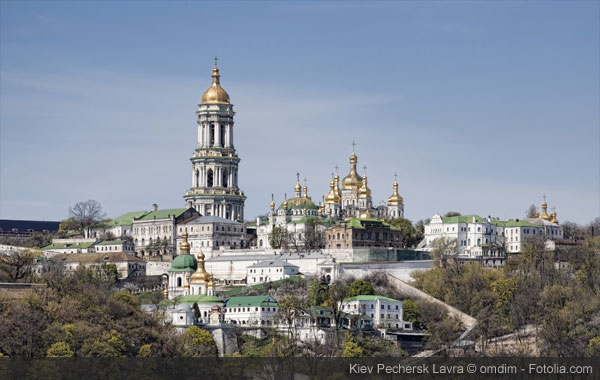 Chilling and dark, but no less significant, Babi Yar is a ravine in the northwestern part of Kyiv where the occupying Nazi army carried out a series of large-scale killings during their campaign against the USSR. The list of massacres includes the largest single killing in the history of the Holocaust, when in September, 1941, 33,771 Jews were killed in a single two-day operation. A further 100,000–150,000 Ukrainian political opponents and ordinary citizens, Jews, Gypsies, and Soviet prisoners of war would be executed here. A somber place it is dotted with memorials to the victims. 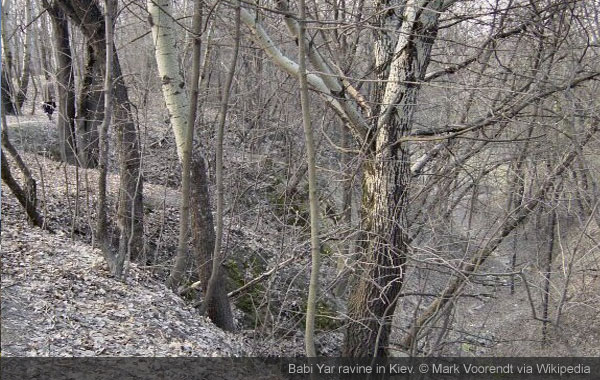 From its inception Andriyivsky Uzviz was designed to connect the Upper Town with the historic commercial area of Podol. Often referred to as one of the oldest streets in Kyiv it begins on the summit of the Starokyivska Hora (Old Kiev mountain) near Saint Andrew’s Church. The street winds down the hill to its conclusion in Kontraktova Square. Today the street brims with market stalls selling everything from original oil paintings, souvenirs and Soviet relics set up outside galleries, restaurants and cafes. 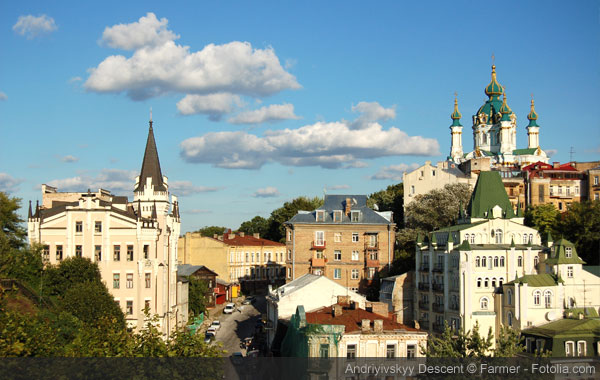 The park is part is part of the memorial complex surrounding the National Museum of the Great Patriotic War of 1941-1945. Covering 10 hectares on the hill, overlooking the Dnieper River in the Perchersk district, the park is a depository of Soviet military might. There you will find an array of tanks, planes, missiles and other military hardware. It is also home to occasional concerts and exhibitions that celebrate the sacrifice and ultimate victory of the Soviets. The Alley of the Hero Cities features sculptures depicting various aspects of the war. 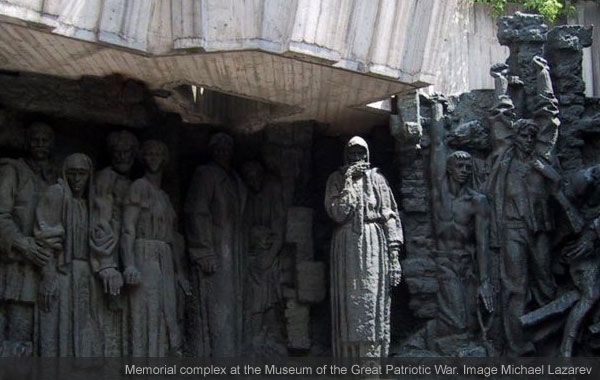 Make no mistake, this is one big mama. At a height of 62m Mother Motherland holds the honor of being the 17th tallest statue in the world, dwarfing the 46m Statue of Liberty. Her height combined with a 40m pedestal means she stands at a total of 102m. Situated in the park that sits at number nine on our list, Rodina Mat has become a symbol of Kyiv and her position above the city means she dominates the skyline. Constructed in glistening stainless steel she (like the park she occupies) is a very Soviet symbol – in her left hand she carries a 13m by 8m shield emblazoned with the Soviet state the hammer and sickle. Still she has a robust charm of her own. Her base houses the National Museum of the History of the Great Patriotic War. 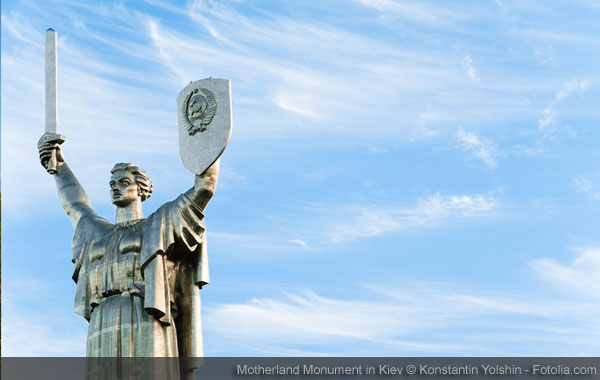 When touring Kyiv, you will see it an ambiguous city with a mix of architecture from different eras – tsarist, Soviet and modern. Yet somehow the recipe work and ingredients come together to make one of the most beautiful capitals in Europe. This city is not easily forgotten.

By Olga Leleka. Olga Leleka is part of a team of writers at internet hotel reservation website www.booked.net which offers a comprehensive list of hotels in Kyiv.

Research Claims Americans Plan to Visit Europe Despite Ukraine Conflict
Ukrainians Travel Visa-free to the EU from June
Hike the Snow Mountain: Hoverla in Ukraine Is a Mountaineer’s Dream
Georgia and Ukraine Closer to Visa-free Travel to the EU
Previous: Magnuson Hotels Extends to Southeast Asia
Next: Selected London Hotel Images from Google Plus