Since Google announced their proposed acquisition of travel software gurus ITA, the world of online travel has been in flux. At least this is true where the leaders in online travel business are concerned. Expedia, Kayak, Sabre Holdings, and Fairlogix have come forward with a coalition formed up over their organization FairSearch to try and stop Google’s buyout of the world’s most used airfare booking software.

The Justice Department can almost be heard breathing a sign of consternation even from here in Europe. Using fear as their main weapon, four leading online travel players try and sabotage Google’s bid to outdo Bing basically.

The latest news, via our friends at Tnooz comes out of the PhoCusWright Conference going on in Phoenix. Since forever, Google and ITA have been a part of this travel extravaganza, but now both have abstained from attending what will likely turn out to be a FairSearch witch execution if the rumors ring true. But, judging by the theme of the conference this year, Chaos Calls, those pachyderms there in Phoenix are believers in limitation anyway. The video from the conference at the end of this article boldly projects, “the golden age of the Internet is over!”

I am sure the people I know that forged Web 2.0 into the collective conscious, the Google gang, Jimmy Wales, Tim O’Reilly, Arrington and TechCrunch, MacManus and ReadWriteWeb, Cashmore, Jobs, Gates, Amazon and eBay – a thousand innovators wouldn’t laugh in the face of this suggestion – but this is where traditional corporate dogma meets technological innovation. Aside the idealism of infinite possibility though, this year’s PhoCusWright Conference actually mirrors the narrow focus of the FairSearch organization – blinders on the future of travel, as it were. Where public support for FairSearch is (mashup below) – well, looking at their followers it appears their “Chaos” has yet to begin. 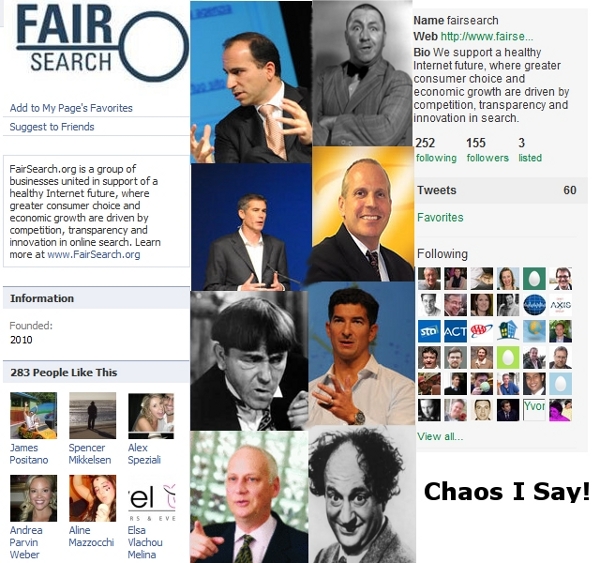 How to navigate BS

Just like on any rookie blog, even seasoned marketing or PR professional site, there are so many experts out there to tell people “what is what.” Travel to toaster ovens,  there is no shortage on the web, or next door, of people with vested interests to sell you a bill of goods. How anyone can know the truth of anything in this moment in time is – well, almost impossible. And here is where Google and the ITA deal come into focus. The folks at Phoenix’s Westin Kierland surely debugged their rooms in fear of Google’s international spy consortium.

The innovators at this supposed “travel innovation summit” are not going to want to hear the Internet revolution is over. From Goby to Flymuch, it seems to me a lot of smart people have pinned their hopes and dreams to being the next YouTube? The obvious to Tnooz’s Kevin May, is probably the literal for the rest of us – the sole job of Dara Khosrowshahi (CEO, Expedia), Steve Hafner (CEO, Kayak), Hugh Jones (CEO, Travelocity), and Jim Davidson (CEO, Farelogix) during this conference will be garnering support from those who power travel.

While I always defer to Kevin on the subject of travel tech, his suggestion that Kayak’s , Terry Jones’ piece at the Mercury was “powerful” seems a bit much, Jones just reiterates how Google will rob consumers once they take over the world. Such regurgitations are only powerful if someone is naive enough to believe them. Let’s just get to it, if Expedia had $700 to but ITA? Isn’t it obvious these execs are creating dogma to suit a situation?

Finally, I mentioned marketing and PR – this whole “Chaos” thing making me think of a great client SecondBrain – an aggregator startup that organized our information chaos. Things sounding familiar after a while you know? These experts have taken the chaotic competition for customers (devices used for communications basically) and hammered out one more thing they can be expert at – how to use them and etc. Salesmen – fooey!

I wonder if they ever studied about the real Golden Age? If the Internet’s is over, it will be largely due to corporate machinations like the ones going on now. You scarcely need a brain to figure out travel (and every other business) is going digital, having someone to pat your hand and say; “You poor over tasked iPad user, let us soften the blow for you.”

Chaos Calls – Navigating the New. I like “Fear Google – Stick With Expedia” better – is that the same thing?