BUONGUSTO Ristorante Off the Hauptmarkt Trier

A beautiful Calamari Grill - A rescuer of a squid

Trier, Germany — Our Birthday Week and the hunt for the UN-schnitzel. BUONGUSTO – Ristorante – Pizzeria, just off the main Hauptmarkt square. 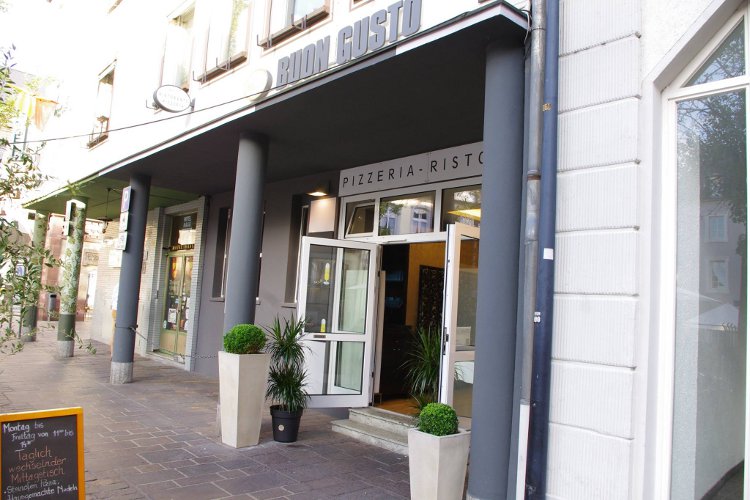 Mihaela and I set out for downtown Trier for day two of our annual “birthday week” yesterday (She’s August 15, I’m the 17th). Having plopped down in nearly every eatery in Germany’s oldest city these last 7 years, finding a new hidden gem was our mission on a perfect summer’s day. Relegated to the side alleys of the pedestrian zone, choosing from off the beaten path seemed logical.  So confronted with the typical schnitzel garden, or a classy looking Italian cafe/restaurant, we gave Deutsche cuisine “the boot” on this cheery day.

First off, this was my idea. Mihaela will really scold me if I don’t let you know. “Come on, I’ll solve this choice dilemma,” this was my command as I led the way across a tiny square in containing no less than 5 eateries. BUONGUSTO, or “good taste”, it was the classiest “looking” of the bunch, ergo my reason for playing culinary “boss man” on this outing. Of course Mihaela loved the freshly folded guest blankets, being prone to take a chill she is. As for little Paul Jules, any place where he can chase the pigeons or sparrows, is a good place to eat. But to the matter. Starters. 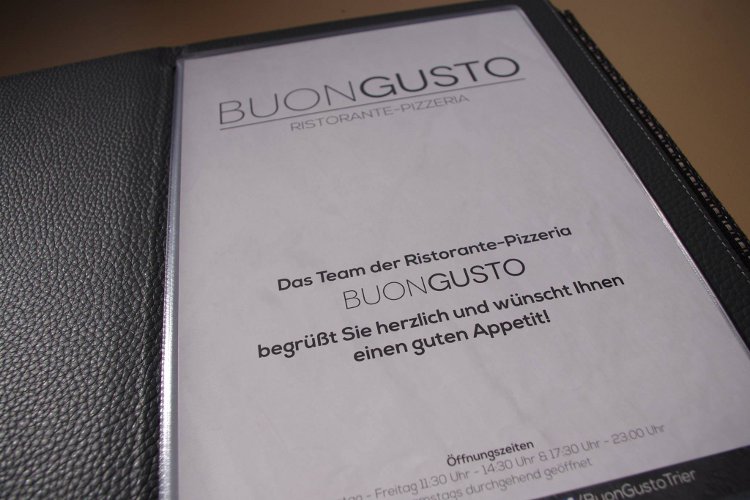 BUONGUSTO has the benefit of a wonderful venue, with seating inside and out, for for Milan or Paris, as easily as in Trier. I’ll start off by saying, our waiter was kind and attentive, everything presentative, being above average. That is, until one gets to the drink menu. For wines, BUONGUSTO has a fair selection of the local Mosel ones, but if beer is your drink, expect the bitter, bitter Bitburger marketed so well in Rhineland Pfalz. Mihaela took the dry Pinot Grigio, which turned out to be a satisfying table variety. Altbier, was my poison, not quite literally. 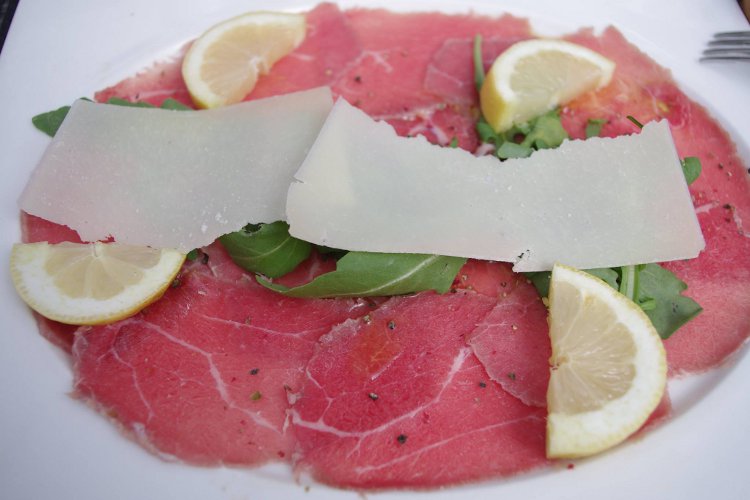 A nice selection of cold and warm starters embellishes the extensive menu at BUONGUSTO, and maybe it’s the expanse of menu items that was cause for any of our negativity here. Mihaela selected, quite typically because she loves it, the dish named for Vittore Carpaccio, with which she was pleasantly presented, a beautiful plate of the wonderful meaty stuff. For me, a sandlapper’s love of shrimps of the sea, once again, temped me far in shore to try Scampi di Pastis. Interestingly, it was I who was to suffer some for having picked this place. Mihaela had zero complaints with starters, but for me paying €13.50 ($18 USD) for four shrimp butterflied and swimming in some zesty sauce… Once again I learned, seafood this far inland is a definite NO. Little Paul Jules, he would not even eat his favorite little undersea tidbits. Back to pigeon chasing, waiting on the mains.

I cannot leave off here mentioning the “fresh” char burned bread Mihaela was told was made that morning. A bit doughy in the middle and armor plated on the surface for our taste. A harbinger, if you will, to a €100 euro self effacement later on in the evening. 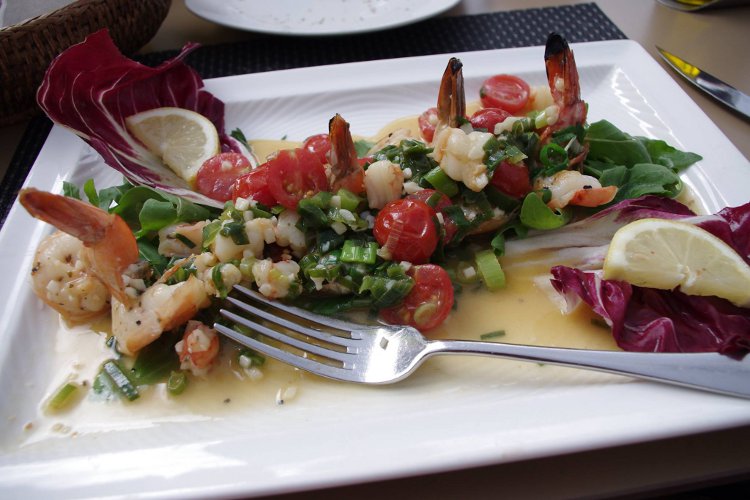 35 minutes, more or less, after four shrimp swam onto my table, a magnificently presented Grilled Calamari swam in front of Mihaela. See? My deep sea treasures were better off where they came from, Mihaela’s swam in as if on a cold, preserving cloud. How that happens, I am still undertaking mentally. While her (my) €18 ($24 USD) was pretty well rewarded, the €24.50 ($32.74) I forked over for Tagliatta di Filetto (slices of beef fillet) hit like a sledgehammer at first bite. What was a perfectly presented visual masterpiece, spanked me into reality at its sheer toughness. My first fillet of beef experience was in Texas in 1962, and ever since then it’s been at the top of my list. So imagine waiting for the chef at BUONGUSTO to don his or her (I did not ask to speak) cowboy chaps to head out and round up this bull steer! Not only was the critter tough, he smelled and tasted a bit like 4 day old hamburger. I was not, I repeat “not”, the happiest cowpoke on this Italian range. 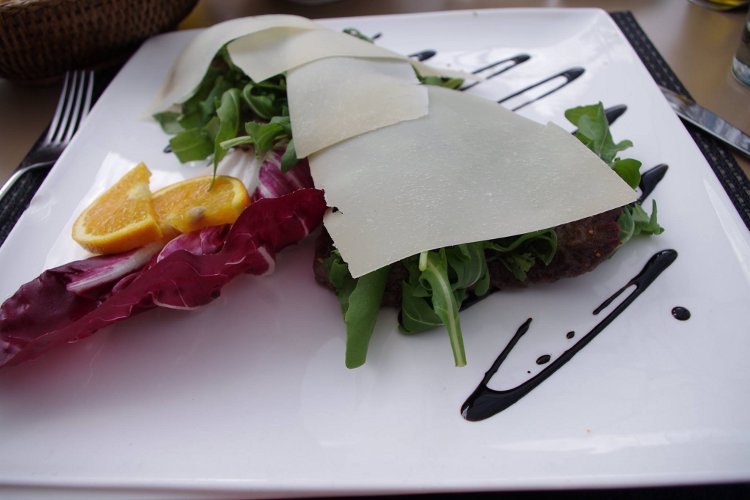 Beware! What lies beneath – Never order expensive cuts where pizza is served? Tough roast beef would have been better

To be fair, our neglecting desert was caused less for the shock of me actually complaining at a restaurant (I never do), and more about the ample portions BUONGUSTO serves guests. I’ll throw in a “shrug” for our son Paul Jules’ Pasta Cabonara, a dish he normally loves, but which was overpriced a bit at €9.50 ($12.70 USD). Alas, he went back to chasing birds and his typical scampering about. Desert was not in the cards, this celebratory day. 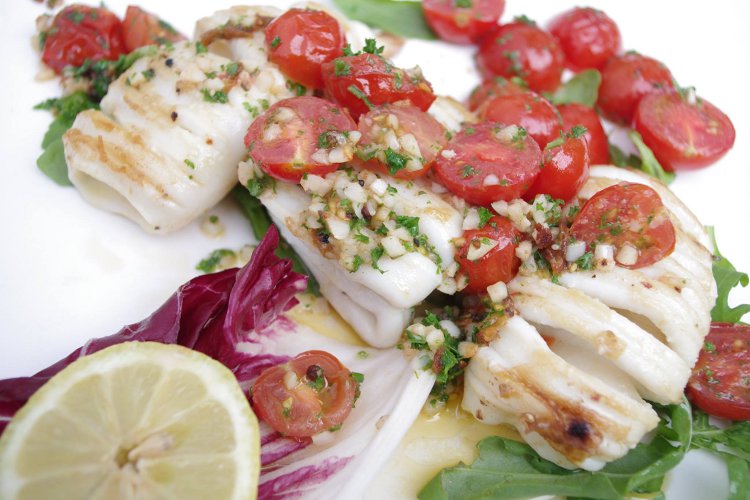 A beautiful Calamari Grill – A rescuer of a squid

Tagline for this culinary adventure? Chasing tasty pigeons in Trier. Too bad we didn’t catch any. All in all, on this day (to be totally fair) BUONGUSTO gets very high marks for presentation, average marks for service, and a mixed up “fair” cuisine because of ruining at least one wonderful dish. And as it turns out, ruining one for a talker. We’ll not give these guys another try, but visitors to the “Second Rome” might try the pizza here. After all, the suggestion is in the name… I know Mihaela, I know.