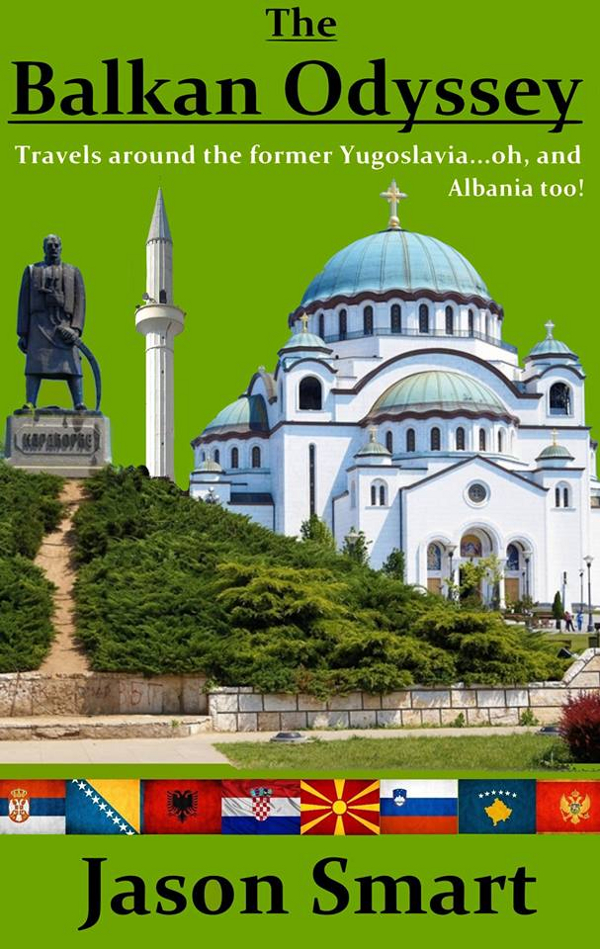 Jason Smart invites us to accompany him in a journey in the Balkan countries, discovering them with a traveler’s eye: The Balkan Odyssey: Travels around the former Yugoslavia…oh, and Albania too!

He makes this trip along with his friends, Michael and Phil.

“Phil simply couldn’t understand my fascination with visiting foreign lands. To him, a week in Spain or a fortnight in Portugal was the basis of a good holiday, and the prospect of jetting off to some weird country in Eastern Europe was an alien concept. Michael was different though – he understood my need completely. In fact, Michael and I had already done a bit of travelling together. We had once travelled from Bucharest to Kiev.“

And yet, here they are, starting a long trip to the Balkans, concentrating on the former countries of Yugoslavia.

They’re first stop is Belgrade, Serbia, “world’s largest exporter of raspberries”. Yes, each chapter starts with such an interesting fact about that country. Also, each chapter presents bits of history, pieces that make the puzzle coming together and allow the reader to better understand the region and its past.

In Belgrade, the three friends end up visiting the city’s famous fortress, the bohemian Skadarlija area, the Bajloni Market, Tesla Museum, Saint Sava’s Cathedral and more. Jason presents the interesting facts about each place, but also some of their impressions: what caught their attention. It might be the special color of a place, the design of another and so on. They also present their encounter with beggars and mention, for instance, that “Serbia has one of the largest Roma populations in Europe.”

During a conversation at the end of a day, asked what he thinks of the city, Michael says:

At the end of each chapter you’ll see a collage with photos of famous buildings and sights mentioned in that chapter.

As you can easily notice, there are some really famous cities included here, and each is presented with the travelers own experiences, the good and the bad, the famous and the off the beaten path. But I am not going to unveil which place was their favorite, nor what did they dislike in their journey. I’m leaving you the joy of reading and discovering!

I will add though that I found interesting the “Afterword”. Here, Jason mentions an important element: that the people from this part of Europe aren’t really big fans of being called “Balkans”, as it is a reference to the war, but prefer to be known as people from Southeast Europe. Moreover,

“To the people of Slovenia, the wealthiest and most northerly of the former Yugoslav republics, they reject the notion that they are even part of Southeast Europe, preferring instead Central Europe. Thus, terminology in this region is a minefield. As is the recognition of some of its countries.”

All in all, if you plan a visit to this part of Europe, you might find this book useful. Also, if you want to find out more about the Balkans and the cities included in “The Balkan Odyssey: Travels around the Former Yugoslavia…oh, and Albania too!”, you will find this reading a good and interesting one. Don’t think that this is a hard to read book. In fact, it is quite accessible, as the history facts are presented in small bits in between dialogues between the main characters.