Beginning in April, visa-free travels between Belarus and China will be allowed for organized tourist groups. According to Vadim Karmazin, Director of the Tourism Department of the Belarusian Sports and Tourism Ministry,  a new protocol has been set up in between the two countries, to allow for mutual visa free travel. 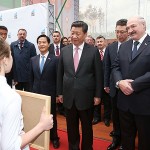 According to the news, China has already ratified the agreement, and Belarus is in the process of ratifying the necessary elements. The agreement will only pertain to tourist groups initially, and a joint travel agency to coordinate actions of Belarus and China is to be set up as well.

Some unique and interesting features of this new regime include China’s interest in all things from the communist era of Belarus. Chinese tourists are currently allowed to stay in Belarus without visas for up to 72 hours. In September 2015 Belarus President Alexander Lukashenko visited Beijing to take part in the celebrations of the 70th anniversary of the victory in World War Two. Since that point, relations in between the two nations have continually improved.