10 Reasons “Crete” Should Be TripAdvisor’s Number One Destination

“The birthplace of both the king of the Olympian gods and of modern European civilization, Crete is a Mediterranean jewel. It’s rich with archaeological and mythological history that’s reflected in its ancient ruins and cultural attractions. Soak up the charming atmosphere of Chania Town’s Old Venetian Harbor or the fortresses and monasteries of Rethymonon. The awesome Minoan ruins of Malia date to 1900 BC, and majestic Mt. Ida is said to be home to the cave where Zeus was born.”

TripAdvisor’s Top 25 Destinations of Europe 2018 were just announced, and Crete now sits at prestigious No. 4. However, us Minoans take great offense at not being chosen number one, since we gave you roads, usable toilets, and the world’s greatest EVER jewelry. Oh yes, and Zeus. But, since most people don’t even know who Zeus is these days, here’s ten more reasons Crete is a lot better than Paris, London, or Rome. Oh, and by the way, we were riding chariots across paved roads millenia before Romulus and Remus milked a she wolf. 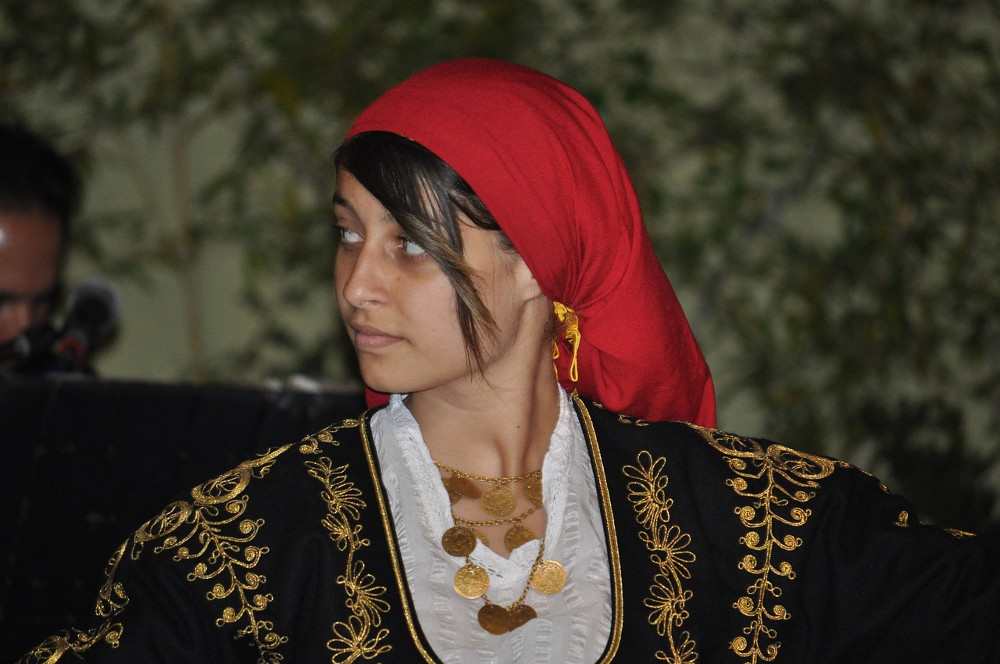 In London or Paris, even in Rome, “slowly slowly” has no relative meaning. Not when compared to how life goes here on Crete, anyway. Tourism agencies advertised the friendly and laid back atmosphere on the island, but enjoying a better life like the locals is something one has to experience for a spell and in person. As a “for instance” – something that is “urgent” here on Crete, it’s something to think about once or twice before reverting back to “siga-siga”… Stress in the land of the ancient Minoans exists only because of crazy scooter drivers (see later reasons).

Officially, raki (Tsikoudia or τσικουδιά) is an alcoholic beverage made from what is left of the grapes after the winemaking process. Of Cretan origin, the libation contains 25% to 32% alcohol by volume, and is about as important as breathing air to locals. The dry texture of raki chases the nightmares away, or so my wife says. But I use the stuff for mouthwash and to prepare the palate for my morning coffee and Greek pastries. In all seriousness, the sound of clinking glasses and “Yamas” (cheers to you pagans from Paris) on this island paradise is yet another part of the magic of Crete.

Coast near Agia Roumeli. They don’t have this in London, Paris, or in Rome  – Courtesy Simon CC 2.0

How can I say this? London and Paris are just boring once you’ve hit the museums, shops, and nightlife. And for the nature lover, there’s just nothing there! On Crete, however, the most ancient European history exists in and out of museum halls. This land of enormous geological contradictions promises you’ll never witness two places that are the same. The national parks and outback of the island are a product of special weather conditions and ancient geology, making the landscape one of the most sensational and varied anywhere on this world. You can be swimming in an emerald sea in one minute, and riding a 4X4 across sandy desert dunes the next. Alpine zones here, overlap with wetlands and fertile meadows, the dynamic effect of which is to strike up amazement in most visitors. Meanwhile, back at the Jardin du Luxembourg in the center of Paris, even the ducks seem bored to tears. 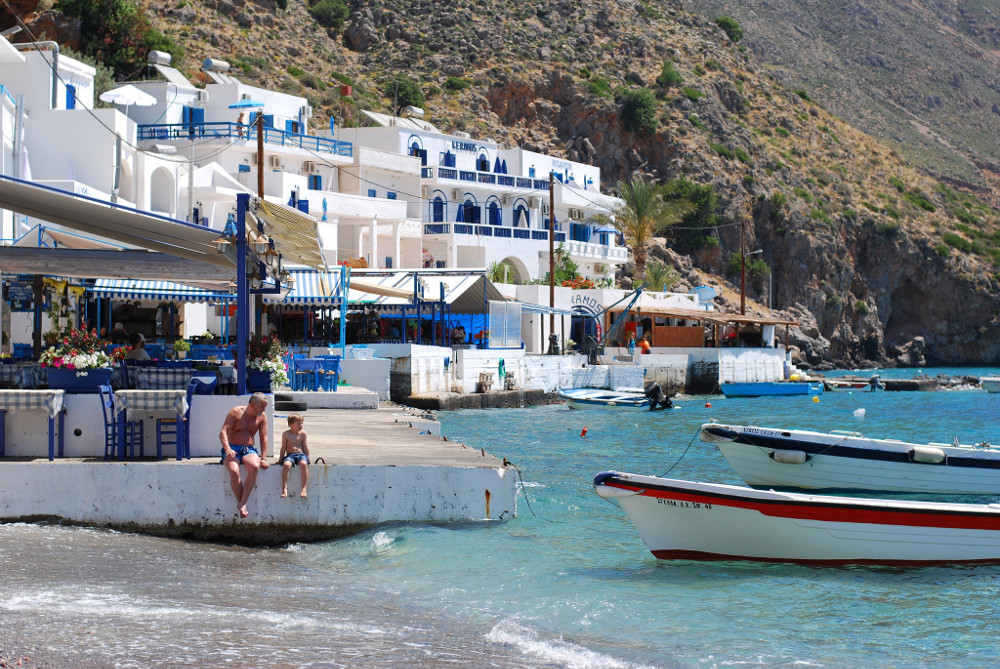 Loutro on the South coast of Crete, which is only accessible by boat – Courtesy PROMerle ja Joonas CC 2.0

Swimming Amongst “NO SHARKS?”

You probably already know about the hundreds of pristine beaches and hidden coves of Crete. But did you know there has never been a recorded shark attack offshore here? Of course there are sharks in the Mediterranean, but they do not approach the shore. Also, those jellyfish stings that you or your kids might have suffered in other seaside environments, they hardly ever happen on account of the currents the surround the island. Oh, and if you wonder about dangerous critters in general, Crete is known for having no dangerous fish or sea creatures, there’s only the Scorpion fish (which live on rocky bottoms) and weaver fish (sandy bottoms), which have a painful but harmless sting.

Oh sorry, wait a minute. The culinary traditions of Crete are about 5,000 years old, not the food served by your tavern keeper. This special Cretan cuisine speaks its own language of tested traditions and uniqueness. Local produce and meats ensure that the food of Crete is as fresh and wholesome as anywhere, and the olive oil from this magic island enhances every morsel too. Cretan wines are unique and wonderful too, and the transient cultures of the island’s inhabitants adds yet another special quality to our diet. By way of an example, the local salad called ‘Dakos,’ is made with fresh tomatoes, Cretan mizithra cheese and olive oil all on top of a crisp, hard rusk, a bit like bruschetta, but a lot better. Then there are the Crete cheeses, which are standouts in and of themselves. They range from soft and mild mizithra to aged graviera, as well as a cheesy spread called xinogalo. I could give you 100 examples, but just change planes in Paris and come taste for yourself! 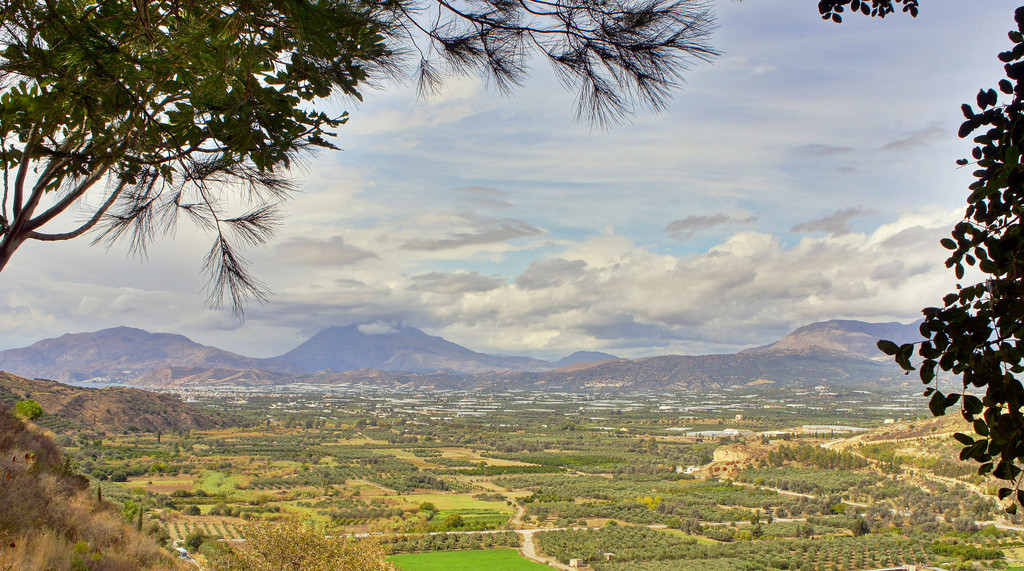 The incomparable Matala Plain near Phaistos where we get the most amazing vegetables from – Courtesy Roberto Strauss CC 2.0

Let’s face it, the adventurer in London or Paris is usually challenged by that occasional irate cabbie, or maybe even a rabid purse snatcher. Even in Rome the main adrenaline rush is avoiding being run down by those deranged drivers. You simply cannot compare standing in line half a day to pack into the Louvre, with bungee jumping or cliff diving on Crete! Action junkies visiting Crete can experience as intense an experience as anywhere. Some of the options include; 4×4 safaris, bungee jumping from the second highest bridge in Europe above the Aradaina gorge, sea kayak trips, caving, SCUBA, rock climbing and mountaineering, and much more.

London and Paris have seen their fair share of hippies, but nowhere will you find a Neolithic cave carved into sandstone where singer/songwriter Joni Mitchell stayed with a band of dope smoking hip generation folk! At my favorite beach, Matala, the ancient Roman tombs cut into the cliffs served Mitchell and her companions well during the late 60s. I can almost hear the acoustics of the natural amphitheater there resounding with; “Under a starry dome…beneath the Matala Moon.” Oh yes, I almost forgot. The largest natural palm forest in Europe at Vai Beach was the last “stronghold” of the hippies who were banished from Matala and Preveli Beach in the 1970s. I am not sure if any of them ended up in London, Paris, or Rome, but I am sure they chose Crete for living the free and easy life.

Since I got on the topic of dope smoking hippies, most people do not realize that the best marijuana grown in Europe comes from Crete. Yes, you read that correctly. A few years back The Telegraph sensationalized a story about pot growers here on Crete, the title pretty much said it all. The same Londoners and Europeans who fly to Amsterdam to get high, title their Crete weed growing stories; “Drug-dealing shepherds set up Crete crime empire.” But guess what? The Greek government is about to make cannabis a cash crop if I read correctly. Once famous for exporting hashish, Greece and Crete have been under very strict drug laws these last few decades. But this is about to change. Legislators in Greece have just approved a bill to regulate medical cannabis cultivation and distribution. Which means a “LOT” of hurting people will soon get the legalized remedy they waited for. As for the quality of weed, the Kalamata landrace variety most common here is described in Sensi Seeds as having:

“…a fine sativa with long, compact buds, a lemon-pine aroma and an effect that is described as “trippy” and elevated, laughter-inducing and extremely potent. It is often described as being similar to African landrace sativas in structure, aroma and effect, and has been used as the basis of several commercial indoor varieties (although as a large sativa that is primarily grown outdoors, even its crosses can be hard to control in terms of size).”

In the south in the United States where I come from, learning to shoot and owning guns is just part of growing up. So, having just moved from paranoid and anal retentive Germany, you can imagine how happy it made me to learn the Greece actually have shooting clubs. Heck, even if they did not have regulations that facilitated gun enthusiasts desires, the Cretans would still be the gunslingers of Europe. While the laws here are still strict by American standards, it’s common knowledge there’s a gun under every pillow on Crete! Okay, not really, but the shooting tradiiton here is as strong as in the United States. Statistically, Crete has the highest ratio of guns per person in the whole European Union. Essentially, everybody on this island owns some type of gun, which may partially account for the rock bottom crime rate numbers! Seriously, with all these guns one would think there would be a gunshot wound a day or something, but it just does not happen. And yes, those rumors you heard of the tradition called balothies and customarily firing guns during weddings, baptisms, New Year, and other major events is true.

Zeus Be Praised for Filoxenia

Did you know that the king of the gods, Zeus was born here? Yes, yes, yes, he certainly was. Did you know that the friendliness of the Greek people is legendary, and that their genuine kindness exihibited to strangers is legendary? Well, here on Crete the English definition of the term “Filoxenia” does not really do the character of the people on Crete (especially) justice. The video below does a decent job, since this exact thing happened to me once, I should know. But please consider that Cretans are the friendliest people on this rock. And there is the best reason to pass on through London on your way here. This is the story of “Filoxenia” and how this Greek characteristic came about:

“The story goes: Zeus and Hermes, disguised as poor travelers, visited a small village and began asking for a place to spend the night. They were unceremoniously turned away by everyone except a poor elderly couple – Baucis and Philemon. After generously serving the two guests food and wine, Baucis noticed that although she had refilled her guests’ cups many times, the wine jug was still full. Realizing that their guests were in fact gods, Philemon offered to kill their only goose to feed them. To reward their kindness, Zeus turned their humble cottage into a beautiful stone temple and granted them their greatest wish; to be guardians of the temple, die at the same time and stay together forever as they were turned into trees -one on either side of the temple’s door.”

Freshwater “Miracles” of Crete Island
Crete is Becoming a Top Winter Refuge and Remote Working Destination
The Keftiu: Were They Absorbed and Erased from History?
Live Like Great Odysseus: Book a Week at Santa Thekla Peninsula
Previous: Smart Assistants Are Here To Make Your Travel Even Easier
Next: Breaking News: Sandstorm on Crete – in Images