Tarkhankut is not one of those destinations that come to mind when you plan a summer escape, but it should be something to consider for the peak season of 2017, especially if you are a lover of dramatic, pristine, and unadulterated nature, with a side of unusual and unexpected. This peninsula is Crimea’s least populated region, a land of peaceful sceneries that alternate unspoiled and steep shorelines, estuaries and mysterious ravines, highlands covered in steppe, quiet villages, orchards and patches of grapevines, and archeological sites.

These lands are paradise for true explorers. They are welcoming in their serene, dignified beauty, and although the solitude of the landscape is sometimes interrupted by villages and hamlets, these too blend in a canvas of fairy-tale adventures.

Cape Tarkhankut had a short moment of media glory in 2016 when several international outlets picked up news from Russian news agencies about an underwater museum called “Alley of Leaders,” (often “Reddening Leaders”) in fact an initiative by diving instructor Vladimir Barumenski, who dropped the first sculpture into the depths of the Black Sea in August 1992. According to media reports, most of the sculptures that form today the Alley of Leaders are statues and monuments salvaged after the collapse of the Soviet Union. Among the busts and figures than now rest peacefully under the sea, those who dive here will see representations of Vladimir Ilyich Lenin, Yuri Gagarin, Lenin and Marx, Felix Dzerzhinsky, Sergei Yesenin, and other Soviet heroes. Because the site is 7 km from the nearest village, at 10-15 under the sea, and about 100 m from Cape Tarkhankut, only the most experienced divers adventure among these granite monuments, so the fallen heroes rest in peace, far from vandal hands and intentions. 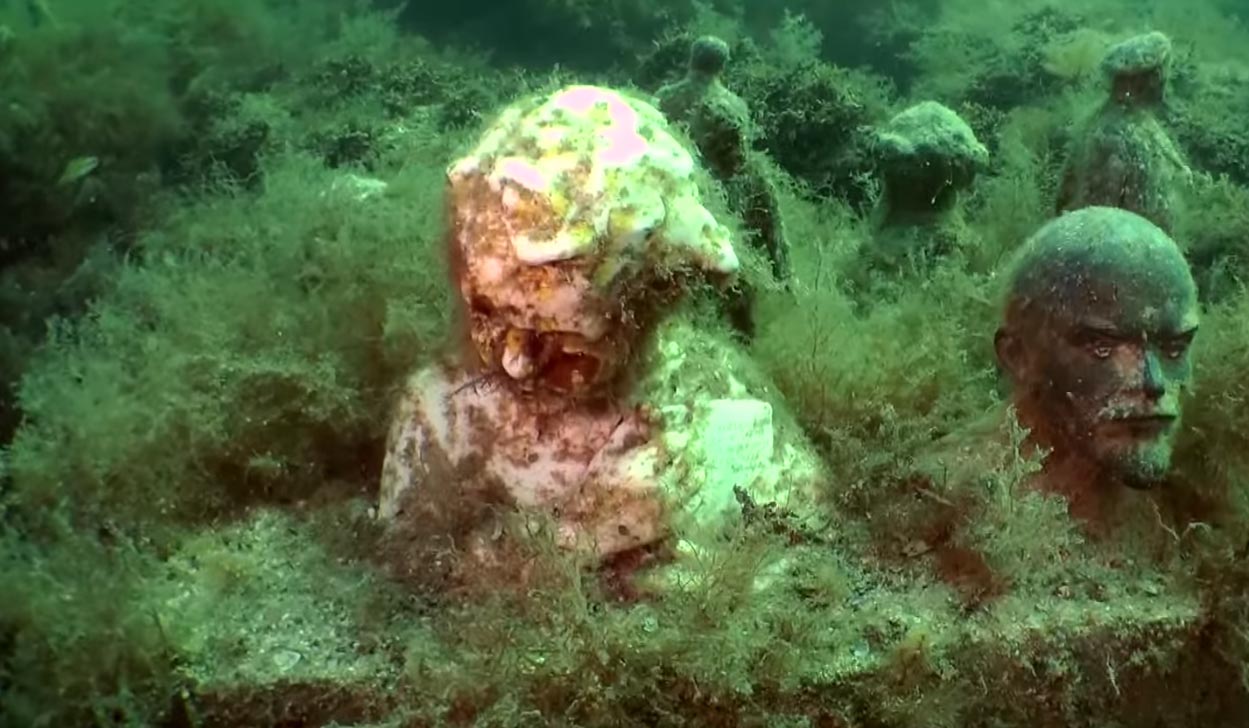 After the first bust in 1992, the diver continued to enhance his underwater collection, which today boasts more than 50 exhibits, including replicas of the Eiffel Tower and London Bridge. Today, this is still one of those “best-kept secrets” only a fortunate few know about, albeit thousands of divers from all over the world are already familiar with the site.

The main landmark of Cape Tarkhankut the is the historic lighthouse, which dates from 1816. It is a masonry building with a tapered cylindrical tower with balcony and lantern – still in use, albeit in dire needs of repairs.

But those who vacation here don’t care for details. The lighthouse is not an eyesore when you capture it from the distance. The beaches nearby are not busy, but you will always see health buffs in yoga poses taking in the breeze, or cheerful youth playing beach volleyball. The dust-covered rural roads that leads to the beach are taken by modern ATVs, and cyclists love these routes too.

Tarkhankut is free of tourist traps. It’s not a place easy to reach, but it is beautiful and safe, and the effort is well worth it. As you explore the territory you will discover many interesting attractions, like the historical and archaeological reserve “Kalos Limen” (also Beautiful Harbor – and later the Tarkhankut National Park ) on the northeastern outskirts of Chornomorske. In 1999-2000, during excavations at the site, archaeologists unveiled fragments of pottery, tools, and the ruins of a Greek-Scythian settlement older than the IIIrd century BC. The park is located on the western tip of the Tarkhankut Peninsula and, besides historical and cultural monuments and the archaeological site with Scythian and Greek settlements and burial mounds, it also boasts hiking and cycling routes, ecotourism trails, a specially protected area, a recreation area, and a cultural heritage protection zone. There are also areas for diving, surfing, and camping sights.

The Sun Valley Sanatorium in Olenivka now owns the pre-revolutionary villa of Pavel Vasilyevich Popov along other excellent lodging facilities and is one of the main attraction for healthcare tourism in Tarkhankut. The complex has a wellness center, pools, and a sports ground, and organizes activities to restore and maintain your health, but also excursions, diving and surfing lessons for children, and other activities to keep you in shape.

Golfers Will Be Keen to Seek Oracle at the Delphi Golf Resort
Why Isn’t TUI Already Sunken To the Bottom of the Deadpool?
Hashtag #Crete: The Best of the Island Via Instagram
A Pandemic Lesson Greek Hoteliers Refuse to Learn
Previous: Booking.com Launches Startup Accelerator
Next: February’s Minsk Family Fest a Big Hit

Greece’s officials are working hard to figure out strategies for reopening shops as of January 18th.