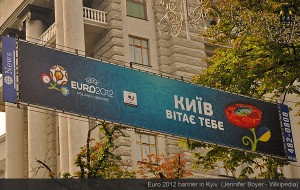 The UEFA Euro 2012 football competition has generated a massive increase in the number of people traveling to Ukraine. On match days, over 300,000 visitors cross the Ukrainian border, according to the country’s Minsitry of Infrastructure. Not only is the competition attracting visitors, it is also outranking Polish co-host Warsaw, as shown by the Master Card Global Destination Cities Index.

The June football competition lead in an increase of 90,000 visitors to Ukraine, compared to the same period of last year, explained Ukrainian Minister of Infrastructure Borys Kolesnikov. On June 11, the day when the match between Ukraine and Sweden took place, more than 100,000 fans visited Kyiv’s fan-zone in Maydan Nezalezhnosti (Independence Sq.). The number of visitors is expected to grow even further in the second round of Euro 2012.

“After the first round of the championship Ukrainian airports started to receive more applications for accepting charter flights,” commented the minister.  He added he believed the cause for the spike was foreign fans who had previously visited Ukraine and then shared their experiences with family or friends.

The four Ukrainian cities that host the European football championship: Kyiv, Kharkiv, Donetsk, and Lviv, are the main attractions for foreign tourists in June 2012. The number of visitors to Kyiv would further grow by 18.5%, states Master Card’s Global Destination Cities Index.

Most of the tourists taking the Ukrainian capital by storm also tend to spend more money on their visits to Kyiv, as in 2012 the expenditures index would grow by 29.8%.

Ukrainians Travel Visa-free to the EU from June
Hike the Snow Mountain: Hoverla in Ukraine Is a Mountaineer’s Dream
Georgia and Ukraine Closer to Visa-free Travel to the EU
How to Decorate a Christmas Tree Like a Ukrainian
Previous: Treovi To Revolutionize the Online Hotel Industry
Next: This Week’s Famous Eastern Europeans Quiz