The organizers of the Sochi 2014 Winter Olympics have just unveiled the sporting event’s futuristic torch, an interesting piece inspired by a mix of Russian folklore, including a mythical Firebird,  the country’ surprising contrasts, and space-age technology. The unveiling of the torch was quite the event in Russian capital Moscow, as it should be. Olympics are great attractions for tourists, sport lovers and businesses and the sooner they start being promoted, the better. 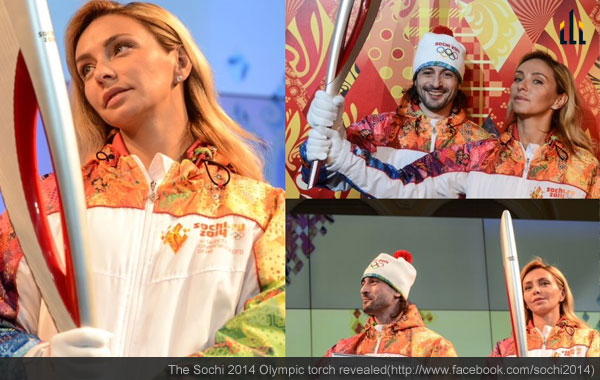 “The Olympic torch is one of the key symbols of the Games,” Sochi 2014 chief Dmitry Chernyshenko explained at a news conference  held in Moscow. “In our case, it symbolizes the beauty and diversity of Russia.”

The torch relay, the next Olympic event bound to attract tourists and news crews from around the world, will start in  ancient Greek town Olympia on October 7, 2014 and will be the longest in Winter Olympic history: an impressive 65,000 kilometers relay, that’s a little over one and a half times the circumference of the Earth. On its way to Sochi, the torch will be taken to Mount Elbrus, Europe’s highest mountain, Lake Baikal and the North Pole.

“We hope it might even go out into space,” Chernyshenkohe added.

The futuristic torch of the 2014 Winter Olympics is coloured red (the traditional color of Russian sport) and silver, which according to Sochi organizers is the most popular in Olympic torch history.  It weighs a little under to kilos and will be carried by 14,000 torchbearers through 2,9000 towns and villages from 83 regions of Russia.

“Our torch is really state-of-the-art. It combines such incompatible things like cold metal with fire, which is very symbolic because for the first time in history Winter Games will be held in a subtropical city,” Chernyshenko said in reference to the Russian Black Sea resort. “In Sochi you can enjoy a warm southern sea as well as high, snow-covered mountains.”