One of the handiest apps for hungry travelers we’ve stumbled across has just got a whole lot better – thanks to a new mapping feature update, the Ness restaurant-finder app offers users much more to feast their eyes upon when looking for a bite to eat.

Ness was great before the update. It always produced useful results – results that were often different from similar travel apps out there. The reason why the results are different is due to the way Ness works. Rather than simply pulling in search results from sites like Google or TripAdvisor, the Ness restaurant app employs something called “machine learning technology”, which means that the results you see are derived from social media platforms like Twitter, Facebook and Foursquare, instead of the more traditional sources everyone else relies upon.

Ness goes further though; it also takes into account your own personality, using data stored in your phone about your behavior, likes and dislikes to make sure that the results it pulls up are the ones you most want to see. More often than not, that is exactly what pops up – mouth-watering results that pose an entirely new problem altogether – which restaurant to choose?

Now with the new mapping technology update, perhaps that choice will be made slightly easier – or at least, easier for those folks who can’t wait a moment longer anyway – as we’ll now be able to opt for the nearest likely place that pops up. 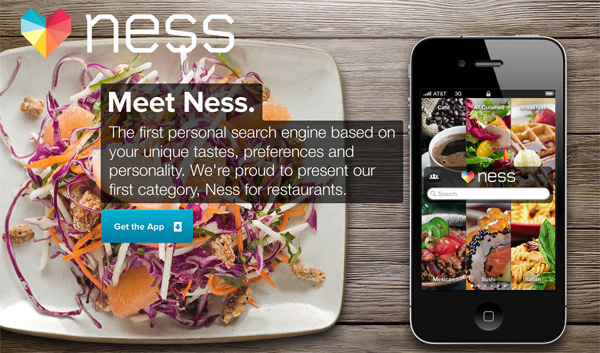 For those who haven’t tried it yet, Ness couldn’t be simpler to use. Simply select the cuisine you fancy, and that’s it. Ness will pull up a number of results, each of which is given a color-coded percentage relevance according to the selection you have made. Restaurants which come in at 100% relevance are coded pink-red, those with a 75% match are orange, those with 50% are yellow.

See a restaurant you like, click on its pin and you’ll see more information about the place, including opening hours, its overall percentage score and some reviews.

The idea behind Ness is simple, says designer Scott Goodson. The app is designed to be used “at-a-glance”, so users can find restaurants quickly and with the minimum of fuss.

Yet there is even more to come from Ness. Goodson told TechCrunch that while the new mapping view was important, “there’s a lot more to do.”

He explained that future updates may include making the pins easier to decipher – something that remains a bit of a problem for restaurants that are close to each other on the map. Eventually, Goodson hopes that the app will also be able to add other services besides restaurants, so we could well see Ness evolve to become a comprehensive travel app to rival that of Google maps et al.

Ness on the iPhone

In the meantime, anyone hungry or curious about Ness can download the app right here and take a look at what’s on offer, food-wise, in their area.

Greek Finance Minister Christos Staikouras is inviting foreign investors to invest in Greece. But some fear outsiders already own too much of the country.

A rare Mediterranean hurricane-like storm Ianos landing in Greece has grounded flights and is lashing the surrounding seas of Greece today.