A tradition unique to territories inhabited by Romanians and Aromanians, Mărțișor is the diminutive of marț (in modern Romanian ‘Martie’), the old folk name for March. The word Mărțișor literary means “little March” and it depicts a symbolic gift accompanied by a red and white string, which is offered to women and girls on the 1st day of March. A very similar custom can be found in Bulgaria – Martenitsa. 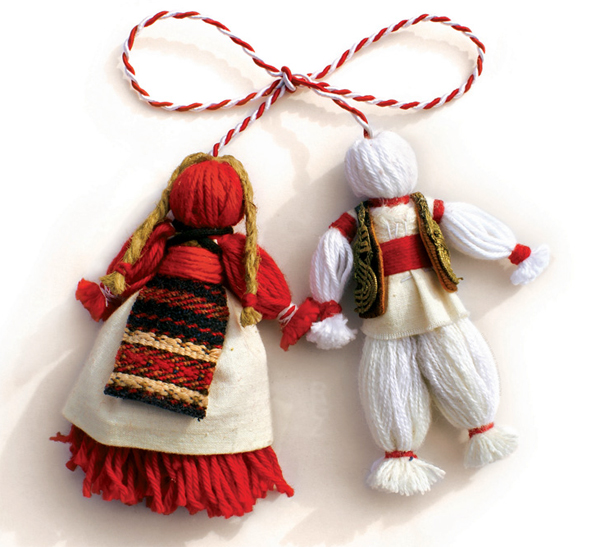 De Mărţisor - traditional festival at the Village Museum, in Bucharest.

For both countries, the small white-and-red talisman is a symbol of the Spring to come, a symbol of friendship or love, appreciation and respect. In Romania and Moldova, the tradition of Mărţişor is very old, going back more than 8,000 years -believed by many to have a Roman origin, or Daco-Thracian, depending on the archaeological finds. The Roman origin, however, makes more sense to this writer.

In ancient Rome March 1st – ‘Martius’ honored the god Mars, and was also New Year’s Eve. Mars was also an agricultural guardian – a feature that ties him to many Spring celebration. Thus the red and white string could be explained as a symbol of war and peace, vitality and victory. The Thracians also used to celebrate the New Year’s Eve on the first day of March, and the Daco-Romanians still celebrate the agrarian New Year in spring.

There are numerous events celebrating Mărțișor today in Bucharest, and all over Romania. Starting today, to March 8, 2011, all women have free entrance at any theater show at Teatrul Masca, Jacques Lecoq hall.

Baneasca Shopping City offers a Mărțișor fair, featuring hand-crafted mărțișoare, by Romanian plastic artists and amateurs. There will be other artsy gifts available as well. Many clubs feature a special programme today as well, with local stars like Mircea Baniciu, Pasager si Obligo, and more.

The tradition is so popular in these Eastern European countries, that even Google has honored it today, with a special doodle.

The Bulgarian and Romanian-language versions of the Google search engine show a special Google Doodle, marking the 1st day of March.