Map of E.Coli Outbreak in Europe

If you are traveling to Europe these days, the following map shows you where, and how many, E.coli cases have been reported across the continent. All these patients are understood to have been infected after traveling in Germany. Initially, Germany blamed Spanish cucumbers for the outbreak, but these have been cleared by testing. Currently, scientists are still struggling to find the food source of the disease.

As we previously reported, this is a new strain of E.coli, extremely resistant to antibiotics, and very aggressive. The strain has an eight-day incubation period, which means that the outbreak may not have reached its peak. If you travel to any of the following countries, avoid eating tomatoes, lettuce and cucumbers, which are believed to carry the disease. 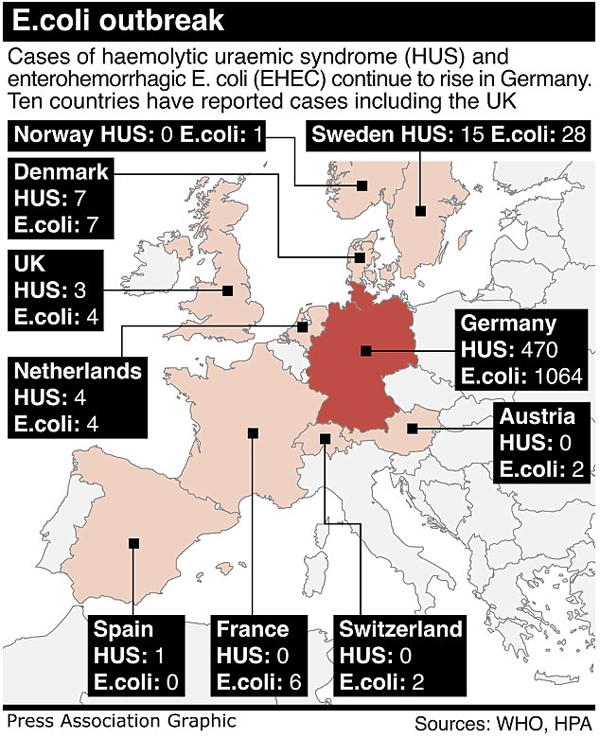 The numbers in Germany, and the fact that cases in other countries have been linked to travel to Germany, suggest the likelihood that German vegetables were infected from cattle. If you eat raw vegetables while traveling in Germany, and exhibit abdominal cramps, bloody diarrhea, fever and vomiting, go see a physician immediately. These are some of the early symptoms of E.coli infestation.

As you see in the map, there are some hemolytic-uremic syndrome (HUS) reports as well, a disease characterized by hemolytic anemia, acute renal failure (uremia). In some cases, patients may develop chronic kidney disease and become reliant on renal replacement therapy.