The Wonders of Folk Art and Greece

The Art of the People

No visit to any exotic foreign country would be complete without taking the time to fully appreciate the art of the region. In particular, folk art can be fascinating as it sheds light on the beliefs and way of life of a group of people. Folk art often tells the story of a culture in a way that textbooks cannot. As opposed to other art forms, folk art is often utilitarian and practical in its use. These items are created for decoration of the home or the body, so they are much more personally reflective of the artist as opposed to fine art that is created with a buyer in mind. When you visit Greece, you may wish to experience folk art firsthand through visits to museums or by purchasing some souvenirs from local artisans.

When viewed within the context of the time during which it was created, an item of folk art often has much to tell about the culture and prevalent beliefs of its time. For instance, items featuring the common motif of “blue glass eyes” have been popular in times past for the belief that the bearer of this talisman is safe from the “evil eye” curse. Nowadays, of course, such superstitious beliefs have mostly fallen by the wayside in the West, but evil eye superstitions still hold strong in Mediterranean areas. For this reason, the blue glass eye is one of the most popular motifs seen in folk art, and the lucky talisman is often given as a gift to those welcoming a new baby or celebrating a marriage.

Much of our understanding of ancient Greek culture comes from pottery examples that survived the ages. While examples of other ancient art forms are relatively rare, approximately 100,000 ancient Greek vases have been cataloged and described. The designs painted on these vases vary widely amongst various regions and time periods, and reflect the attitudes and cultural values prevalent at the time. For example, painted designs featuring warriors and processions of chariots might indicate a warring society, while an abundance of motifs resembling goats and sheep would indicate a more agriculturally-inclined people. For this reason pottery of different regions and time periods has been studied extensively, as well as being admired for its purely aesthetic value.

During the Byzantine age, embroidery flourished and became a popular art form. Needlework was used to decorate both the home and clothing, and in particular ecclesiastical robes. The Tree of Life was a popular motif, as it represented eternal life and reflected Christian symbolism popular during the time. Other common motifs involved birds, flowering vines, rosettes, female figures, crosses, double-headed eagles, and honeysuckle or palm leaves. The styles and patterns used were often specific to a region, so that one can often see an obvious difference in embroidery samples from different islands or geographical areas. In this way, embroidery often tells a story of a group of people, and it can be fascinating to compare examples from different regions.

The Museum of Greek Folk Art 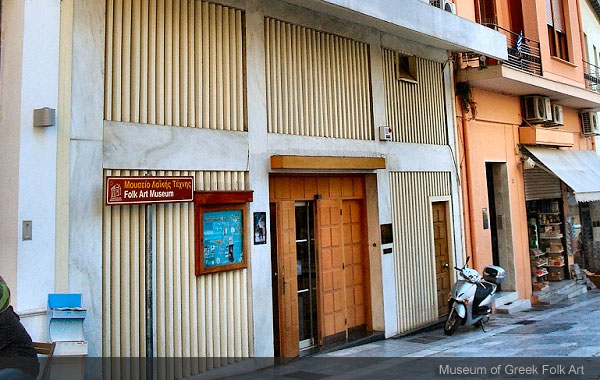 The Museum of Greek Folk Art in Athens, Greece, is a good place to begin your education on folk art in Greece. The museum features all forms of folk art, such as pottery, jewelry, silver work, woodcarving, stone carving, weaving, embroidery, costumes, and folk paintings. The museum also boasts an impressive library of over 5,000 volumes on art and folklore, and many educational programs such as pottery classes are held on a regular basis. Visitors can also enjoy Shadow Theater and traditional Greek dance performances. A visit to the Museum of Greek Folk Art is an efficient way to soak in a wide variety of local culture and experience beautiful, traditional folk art firsthand.

Our guest author, Emily Hall, works for Without The Stress, a firm which assists Southern California travelers with securing expedited US Passports in Los Angeles and SameDay Passports in LA.