Staring up the coast toward Agia Galini from Kokkinos Pyrgos

Staring up the coast toward Agia Galini from Kokkinos Pyrgos

A day trip from our home in Heraklion to a quaint little touristic village of Kokkinos Pyrgos proves once again the unbelievable discoveries to be found on Greece’s biggest island. Like pulling back successive veils that cover the lovely face of a goddess, exploring Crete is just an amazing experience. Visit with us a tiny deserted touristic gem shining on the Gulf of Mesara.

Situated directly in between the settlements of Agia Galini and Tymbaki on the Gulf of Mesara, Kokkinos Pyrgos is one of those places that time has long since passed by. For those unfamiliar, this area of Crete has a cultural and natural history as rich as any place on Earth and an unsurpassed natural beauty. Here you’ll find four Natura 2000 rate species breeding sites, two wildlife refuges, one of Crete most interesting natural monuments, and magnificent wetlands found nowhere else on the island. But your first impression of Kokkinos Pyrgos may be that you are entering a ghost town. Interestingly, this is not too far from the truth. But I’ll explain this later on. My mission here is to introduce the reader to what is AMAZING about this new find of ours.

A Place of Unsurpassed Legends

The Gulf of Mesara sits at the end of the Mesara Plain, which is located in between the Asterousia Mountains at the south and the foothills of the Psiloritis Mountains to the north. It seems fair to say that western civilization itself grew up out of the alluvial soil of this great plain, for civilization grew up from here since Neolithic (5th Century BC) times. Crete’s famous Minoan Civilization sprouted up amazingly here during the pre-palatial period, as great leaps in architecture, pottery, as well as in religious and cultural growth. It is here that the shadows of the great cities of Phaistos and Agia Triada can be found not far from the gulf, and where the Minoan port of Kommos was the ancient gateway to the world. 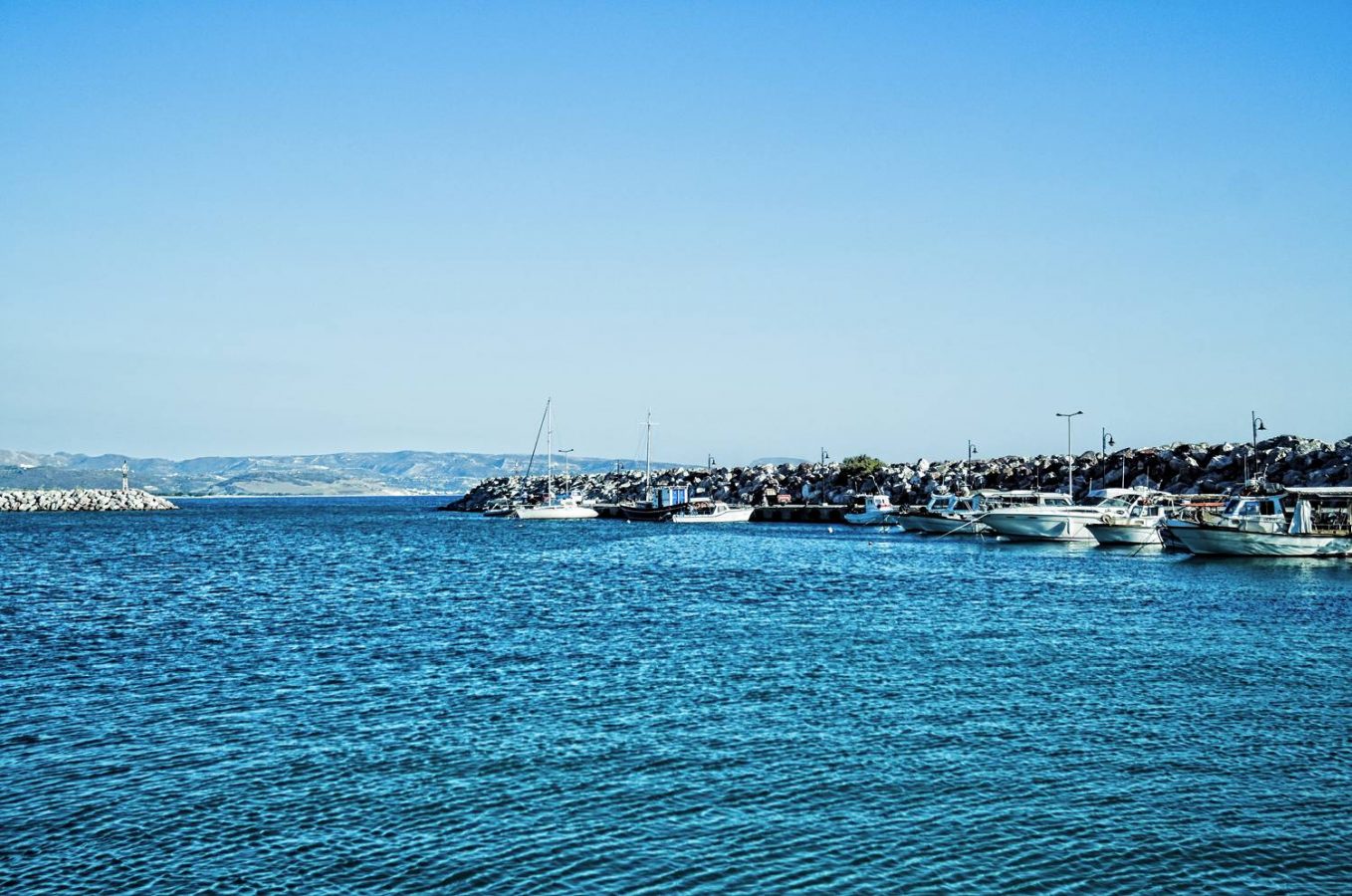 The nearly deserted Kokkinos Pyrgos harbor on the Gulf of Mesara

Much of Minoan life clustered around this magnificent plain and the gulf it empties into still remains unknown. But from the time the city majestic city of Gortyn dominated the Mesara region for over sixteen centuries (800 BC to 800 AD), it is said more than 80,000 people lived there. During Roman times this was the capital of Crete, as well as being the capital of Rome’s North Africa provinces (Cyrene). From Greek mythology, we have the legend of Zeus making love to Europa beneath a tree here, from which union they produced legendary Minos, the king at Knossos and his brothers Sarpedon and Rhadamanthys (King of Festos). The tree, which never loses its leaves, still exists to this day at the Gortys Archaeological site. The breadth and depth of history and legend from this region are impossible to relate in a short article, but the reader should be able to glean an inkling of the magnetism of this place on the world. 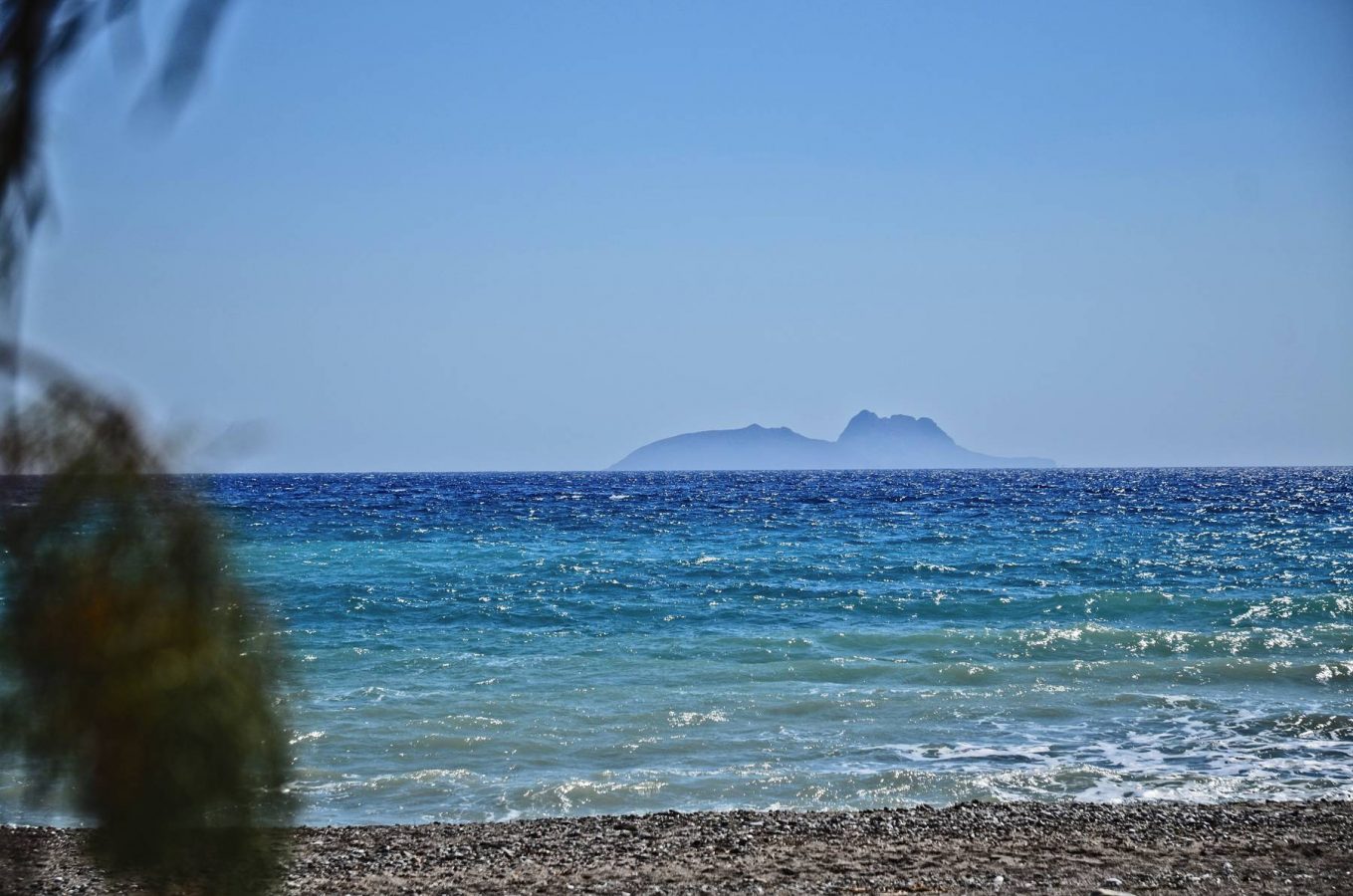 In Cretan mythology, Paximadia was where the goddess Leto gave birth to the god Apollo and the goddess Artemis. I attribute the glow at the bottom of the islands to their mystic power – but that is just me

Like I said, there’s no end to the history and myth of this magical place. But, I will end this historical/mythology background on a fascinating note for you. What if I told you that a rock 300 meters offshore of Komos Beach where the top of a mountain hurled at legendary Odysseus by the Cyclops Polyphemus when the Greek hero and his crew escaped the giant’s cave? This would mean the landmark the locals call Volakas is a lasting remnant of a past that cannot be just myth. Maybe I should start a search for the remaining treasures of the Cave of Polyphemus? Sorry, Crete just does this to you if you dig into the islands ethereal past.

Driving the crooked road down into the Mesara Plain our little crew grew increasingly excited as one-by-one Crete’s wonders pass in review outside the car windows. First, the whole plain coming into view so impressed my mother-in-law Viorica, once we topped the rise just north of the village of Keratokefali. Riding down to wonderful Mires both my wife Mihaela and I voiced amazement at how big this Cretan village is. Since visiting there on our last trip to Matala the town seemed to have sprouted up new streets and buildings. Moving on past the towns of Vori and Tympaki we were all similarly impressed, for none of us had visited these little rural gems before. I was particularly interested by Tympaki, which is a sleepy little town of about 10,000 inhabitants, but our final destination waited only a couple of minutes distant. On entering Kokkinos Pyrgos for the first time my little crew registered varied responses. As I mentioned, the town gives one the impression of being virtually deserted at first glance. 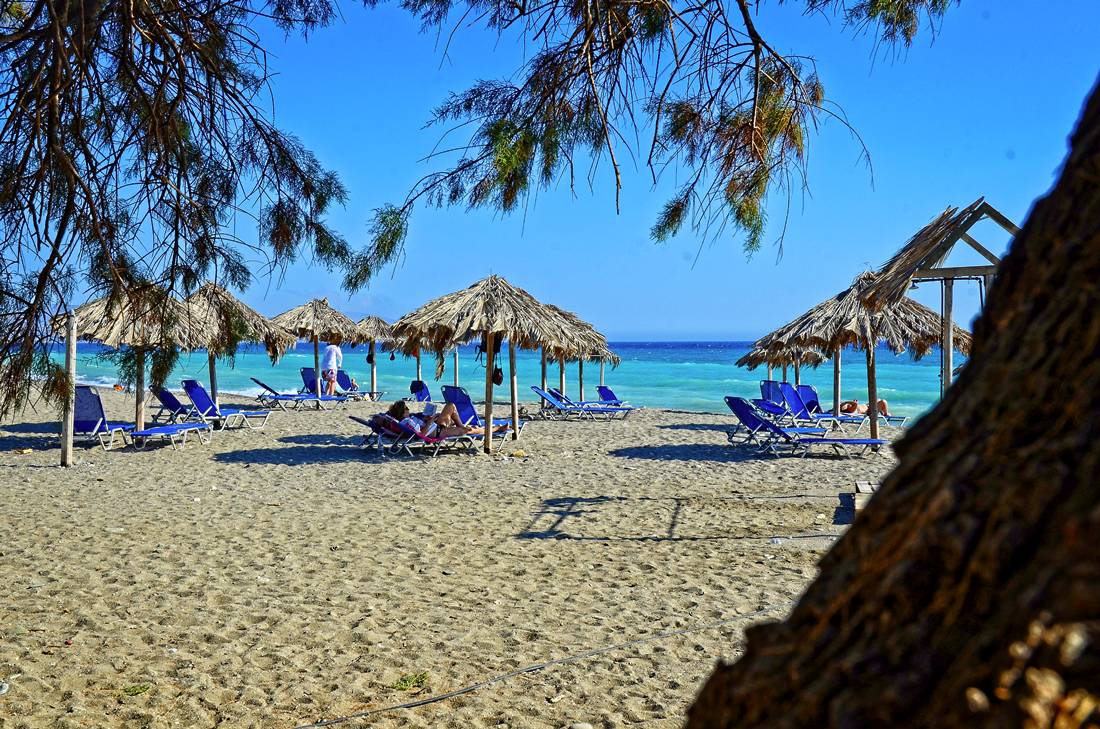 The view from our table at Red Castle Fish Tavern in Kokkinos Pyrgos looking out onto the Gulf of Mesara.

Like many outlying Crete coastal villages, Kokkinos has suffered a lot from the economic downturn. Noted for its small-scale fishing operations and wider scale agriculture, the town was once a bit of a tourism Mecca too. But those times have long since passed in the wake of massive austerity measures exacerbated by drastic unemployment. The quaint buildings of the village now show the bitterness of economic travail, and the ravages the sea has on all manmade things over time. For my wife Mihaela, the apparent sadness of the town compelled her to exclaim, “It’s deserted, there’s nobody here!” However negative this may sound though, our real sense of Kokkinos Pyrgos’ personality was one of relief. Many of our favorite places, wonders like Agia Pelagia and even Fodele Beach, they’re swamped in sunburnt tourists from Germany and Britain in summer. Seeing as our intention is to buy or build a house near the sea in the south, you can imagine our delight in finding the warm and friendly people, though few they are, of a near perfect seaside town. A line of closed taverns and an abandoned harbor house might condemn any town for those expecting five-star luxury resorts. But dreamers and people with vision will only see opportunity and possibility in places like Kokkinos Pyrgos. But I give away too much here. Let me tell you about Crete’s most ideal tavern location, the spot where the Red Castle Fish Tavern sits.

If you follow our path to the Gulf of Mesara I’ll bet you end up at the end of the street in Kokkinos Pyrgos, just like we did. After Mihaela told me (wives do that) to park the car in the center of the village, we experienced the rather ramshackle remnants of a once popular touristic gem with a sad sense of things the way the might have been. Then suddenly, rounding a curve on the dusty road, the idyllic setting of a beautiful (if sea-worn) beachfront tavern came into view. Again Mihaela exclaimed, “Wow, I’ll never leave here.” And this sentiment was echoed by Mommy and our little Paul Jules too. The gentle sea breeze that blows underneath the shade trees of this hangout shield you from more than the hot Cretan sun, I’ll tell you that much. For me, staring out into an unbelievable sea vista, I forgot any trouble I’ve ever had in life. And immediately I began envisioning a little sailboat full of my pals, out there on that crystal bay. I could go on and on, but the owners of Red Castle also know their business, the perfect preparation of Crete sea delicacies. Mythos, fresh Calamari, dolmades, stuffed zucchini blossoms, eggplant salad, tarama, a feast … like always, a perfect feast filled us all. And the mythic Libyan Sea before us filled me with a sense I carried since childhood. Special places do that, you know? The short version of this story is, Kokkinos Pyrgos sits where it always has, just waiting to transport an old American back in time. I cannot describe it fully, no writer could. You have to go there to see, feel, smell, and experience for yourself. 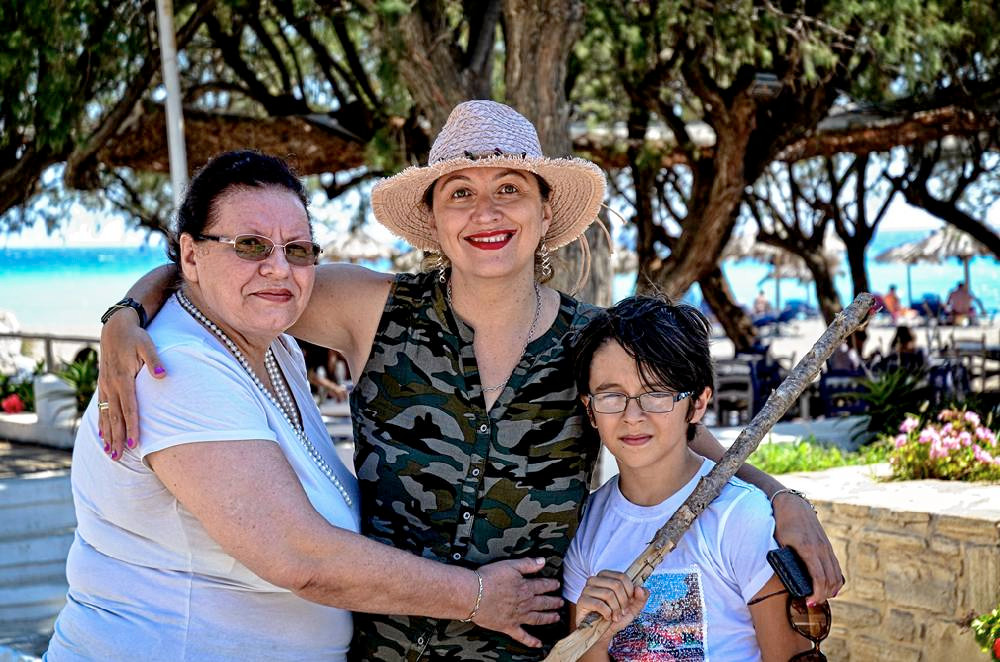 Mommy (Viorica), Mihaela, and Paul-Jules at the front of Red Castle Fish Tavern

This part of Crete is just laying in wait for the right investment in alternative and marine tourism in my view. Past plans to turn the gulf into a mega port would be a catastrophe and lucking these ideas never got past the discussion phase. Rumors of a new bike road in between Kokkinos Pyrgos and Agia Galini, and a better highway in between Heraklion and the gulf hold promise. The region has already been flagged by the European Commission for future development and rejuvenating of the local infrastructure in cooperation with the Heraklion Development Agency. Those efforts are prioritized toward diversifying the area’s economic base, but the possibilities for alternative tourism cannot be underestimated here. I know of efforts by Greek parliamentarian Nikos Igoumenidis for reworking the area touristically and for protecting Crete’s cultural heritage. Up the beach at the Kommos Minoan site, Igoumenidis and Minister of Culture Lydia Koniordou are working to sort out how to best balance heritage preservation and tourism infrastructure. But besides governmental efforts, what’s needed is initiative via private investors to bolster the tourism product here. In my view, this seaside town could serve as a template for success for other Crete municipalities given just a little bit of impetus by planners and initiative by the Region of Crete. I know that the Greek government has offered tax incentives for just such developments. Right now we are considering our own efforts to help such places and to eventually stay summers at paradises like Kokkinos Pyrgos and other towns along the gulf offer.

Stay tuned for stories from all over Crete.