The European Union and Armenia have agreed to vastly simplified visa procedures for Armenians entering Schengen area countries. According to the news, some populations of Armenians will benefit from easier entrance restrictions. 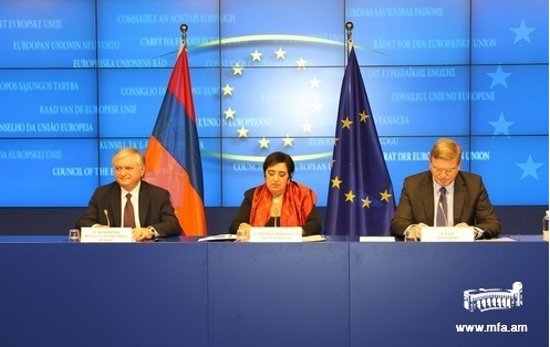 Armenian students, scientists, journalists, enterprenuers, and some other groups will be able to obtain visas for Schengen destinations much more easily. Foreign Minister Edward Nalbandian, along with his Cyprus counterpart Erato Kozakou-Marcoullis, with EU Commissioner Cecilia Malmstrom, penned the document in Brussels on Monday.

Armenia’s regulators have continually assured EU officials of their diligence in ensuring the upcoming elections are the fairest in the country’s recent history. Yerevan hopes that relations between Armenia and the EU will not only normalize, but proper in the months to come.