Russian Railways just launched their service between Helsinki and St Petersburg on Sunday, as Prime Minister Vladimir Putin and Finnish President Tarja Halonen attended the ceremony which could lead the two nations into a new era of cooperation. With talks between Russia and the European Union at a virtual standstill over free visa travel, experts expect Russia and Finland to work a visa deal soon. 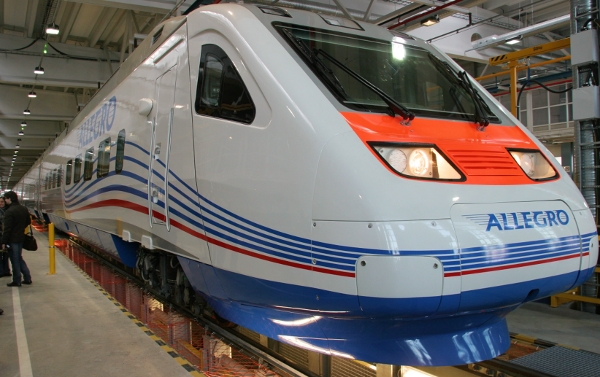 On the heels of this news, Russia could allow visa free travel for passengers on this high speed train link, greatly easing the necessary red tape normally associated with travel to and from the Russian Federation. Chief executive of Russian Railways, Vladimir Yakunin, had this to say about Sunday’s ceremony and visa requirements:

“We have submitted our proposal (to lift visa requirements for EU citizens traveling by the high-speed train) and Prime Minister Vladimir Putin said the cabinet will review it.”

It is hard to imagine Putin or Halonen nixing the deal considering Putin’s all out efforts to ramp up the Russian tourism sector, and the obvious benefits for Finland. Finland will make for a good test case and ally in talks with other European nations too. The four high speed trains that will travel between St. Petersburg and Helsinki will carry an expected quarter of a million passengers in 2011 alone. Already Russian Trains dot com has offerings on the express train service. (below) 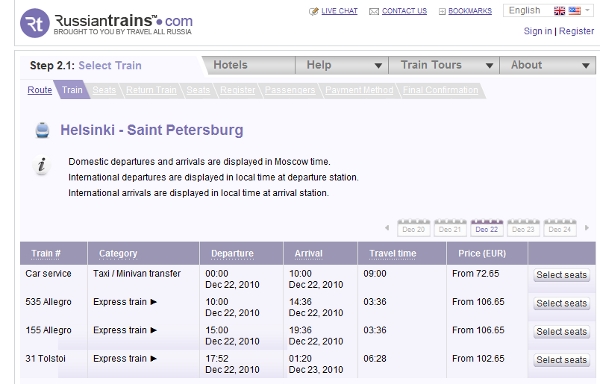 EU citizens who travel to Russia have long complained about the red tape and inconvenience there, as have Russian citizens who travel to the West. It is cooperation like this possibility with Finland that will likely make the difference in negotiations to normalize travel between East and West in the future. This make it highly unlikely Putin would do anything but embrace such visa changes.

Most experts believe Putin can be taken at his word on these matter, and his words reflect a Russia tired of the political dogma that has enchained the country’s travel industry for decades, he told the audience at Sunday’s press conference:

“The visa regime is dictated entirely by political reasons. It is an atavism from the past and should be abolished.”

For Finland’s part President Tarja Halonen appears positive about at least a limited visa-free arrangement. During her visit to St. Petersburg last Monday, the idea of visa-free travel for Russian rail passengers seemed a positive topic. During her visit to St. Petersburg on Monday, she said that extending the three-day visa-free arrangements from cruise ship travel to include rail travel could greatly advance visa-free travel for the EU and Russia.

Just so you know, a first class seat on the express train via Russian Trains dot com is only about €165, not a bad deal for luxury travel.