According to TechCrunch’s reliable network of source, Google may well roll out an integrated ITA search platform within days. A report by TC’s Leena Rao 16 hours ago suggests Google’s recent acquisition may in fact be the forboding nightmare Microsoft, Expedia, and others feared.

The US Department of Justice’s recent approval of Google’s $700 million dollar acquisition of airfare software giant ITA has opened the “obvious” door for Google to engage in online travel via its industry leading products. Detractors of the acquisition, Expedia, Farelogix, Kayak, Microsoft, and Sabre Holdings (among others) did their best to nix the deal using basically “monopoly” and unfair competition statutes as their weapon of choice. But the DOJ as not seeing things that way, so now nothing stands in Google’s way to optimize for travel (as predicted). 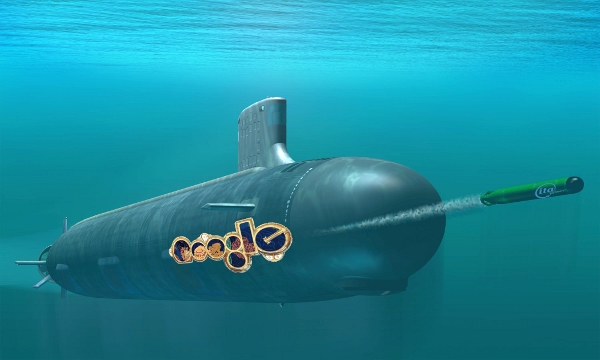 Google has made no bones about the fact they intend to create an ITA backed integration, but the Internet’s search giant has promised to honor current deals with would be competitors such as Kayak. TechCrunch also offered up some possible features of the new integration, at least one aspect being a map based search tool. Obviously filtering, and other user interface aspect will have to be part of any release, just as TC suggested. Interestingly form a developmental standpoint, we have noted many subtle changes in Google map and travel related aspects already.

Part of our work for Stay.com, and for other online travel entities, is generating content of various kinds. Much of this work involved searching using Google for not only addresses and locations, but web resources for various “bits” of information. One such “bit” is information about the “neighborhoods” or areas of destinations. In searching, we typically run across maps where Google has already drawn these area out. Of course this could be a left over remnant of Google’s 2007 initiative in neighborhood maps, but this seems unlikely. If Google intends to make a Google Travel akin to their recent Google + product, the smart move is to “emulate” all the best of the web. I believe this is what they are doing. 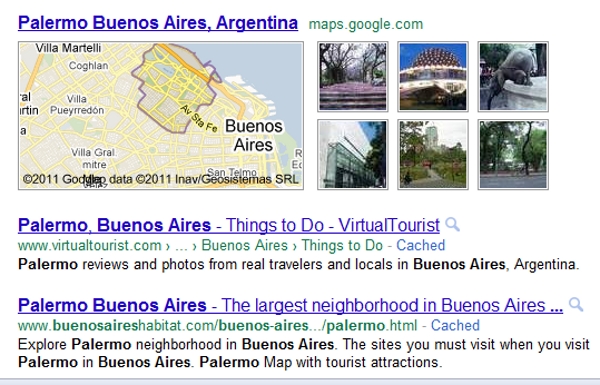 Clearly, Google knows their neighborhoods as this result indicates

Leena Rao goes on to suggest features like; a Kayak Explore clone,  flight results based on your IP address, along with ITA enhanced fare and ticket info. The TechCrunch author aptly  considers Google’s movements in the space will impact competitors. It is difficult to say whether Google intends to “enhance” their share of the travel market, or dominate it. The big online travel companies already pay Google ten king’s ransoms for ads. Perhaps the world’s biggest Internet company will weigh the costs and act accordingly? 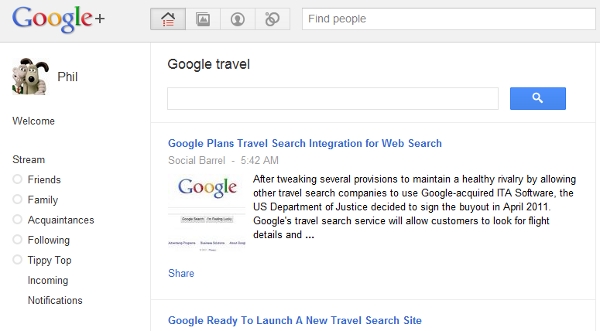 The very cool Google + "Sparks" aspect - will I be able to book from here?

Even though all we have is speculation really, isn’t it clear Google intended to enter travel in a big way? Just the influx of travel related stories and products Google spawns should be indicative. Flights, hotels, rental cars, taxis, dinner for two, iPads, swimming trunks, Android travel stuff, whatever – travel is really the biggest Internet picnic basket there is. Does anyone out there think Google is not in business to make money? Is there someone left on Earth who would not take over the world if they could? Will Google release a new travel tool soon? What would you do? More later as I ask my Google + Google spokespeople to break the story.