In the centre of Yoshkar-Ola - Courtesy Gelio Vostok

Argophilia has always been about discovery, and for imparting news about the people and places of Eastern Europe westerners probably only imagined. Nothing gives us more pleasure than sharing wonderful discoveries, and in keeping with this I’d like to present one of my own. Yoshkar-Ola is an obscure (in English langauge) Russian city of incomparable beauty. This town of a quarter of a million souls is yet another hidden gem of culture, beauty, and fascinating citizens.

Through our ongoing collaboration with Gelio Vostok, one of Russia’s most talented photographic groups, we present this photo montage of the place known as “the red city” – formerly Tsaryovokokshaysk (Царёвококшайск). The texts you read are adopted from our friends’ Livejournal posting. 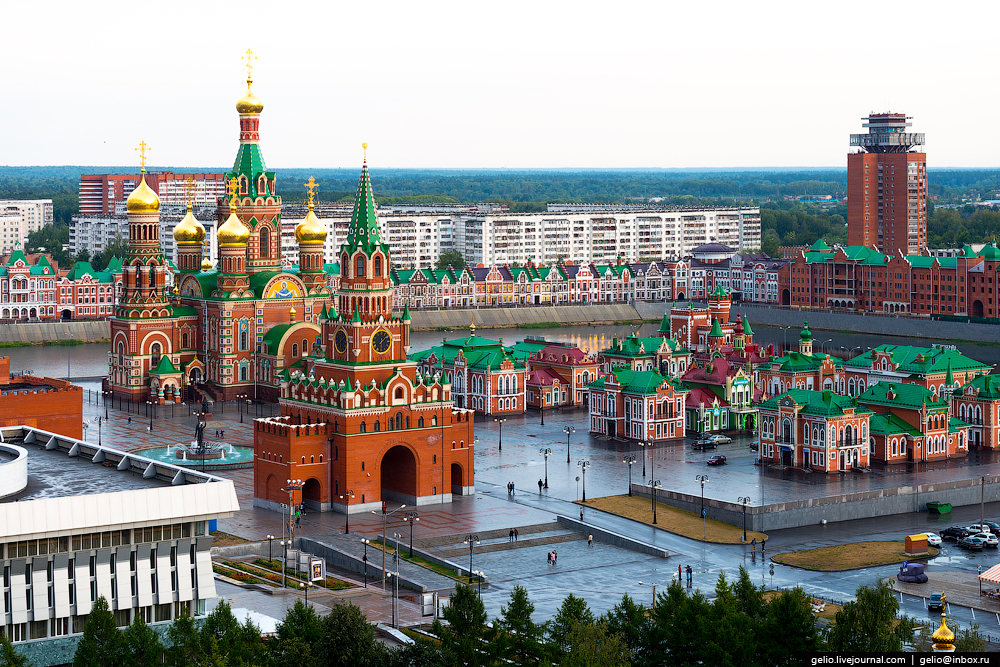 In the center of Yoshkar-Ola- courtesy Gelio Vostok

During the twentieth century, this city developed gradually until the outbreak of the Great Patriotic War. Renamed Krasnokokshaysk in 1919, the war caused an evaluation of industry at the onset, only to be rejuvenated once the Nazis were driven to the west. The modern name, the “red city” in Mari – Yoshkar-Ola, comes from 1928. Today the city is home to roughly 265 thousand people.

Founded in 1584 under the name of Tsarevokokshaisk, the city became an Outpost for strengthening Imperial Russian power and helped subdue the rebellious uprisings of the local people. Near the fortress there was a settlement, which gradually turned into a small provincial town. In the nineteenth century, Tsarevokokshaisk also became one of the centers of political exile. 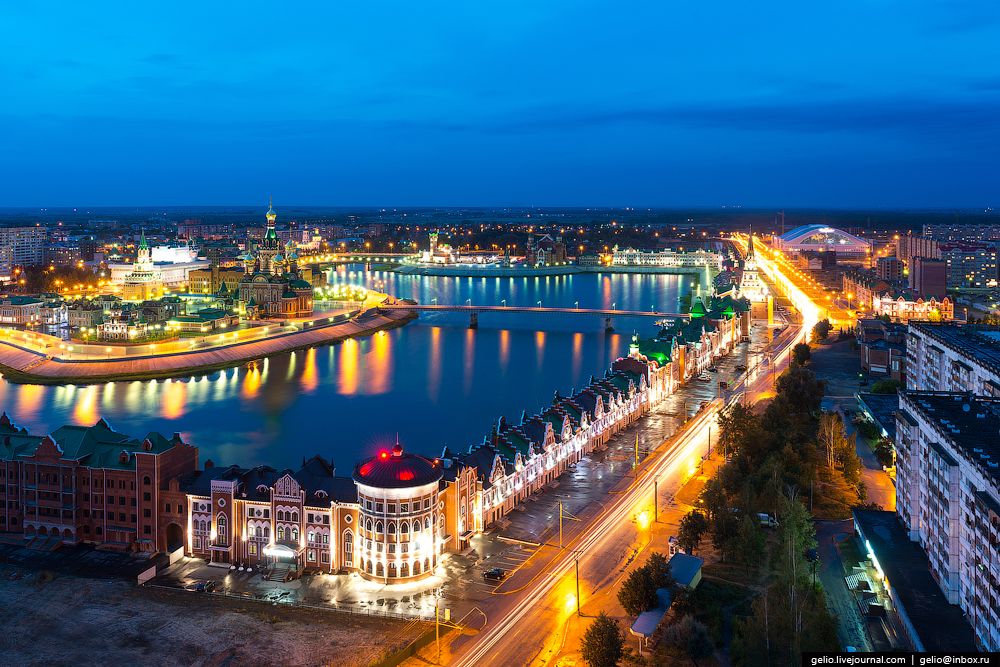 One of Russia’s most picturesque towns, Tsarevokokshaisk became one of the centers of political exile – Gelio Vostok

Rather than visiting Moscow, some 650 kilometers distant, citizens of this marvelous city can enjoy their very own local versions of the Kremlin and St. Basil’s Cathedral”. 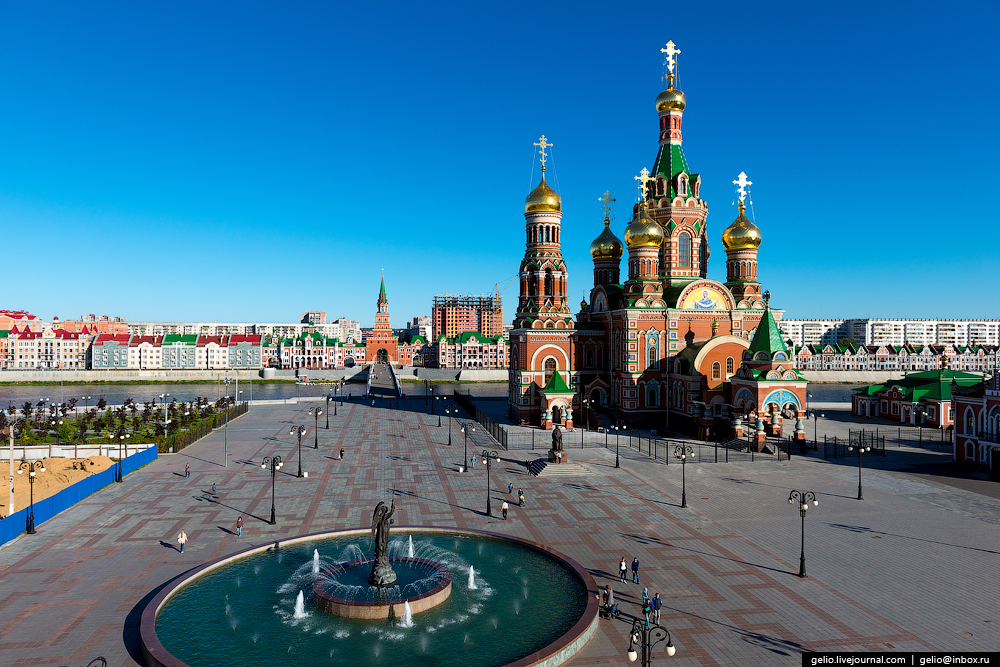 For several kilometers, amplified speakers, is posted hourly chime Annunciation tower – exact replica watches Spasskaya tower of the Moscow Kremlin. The capital of the Republic of Mari El, is situated on the banks of the Malaya Kokshaga River, about 50 km north of the Volga River. 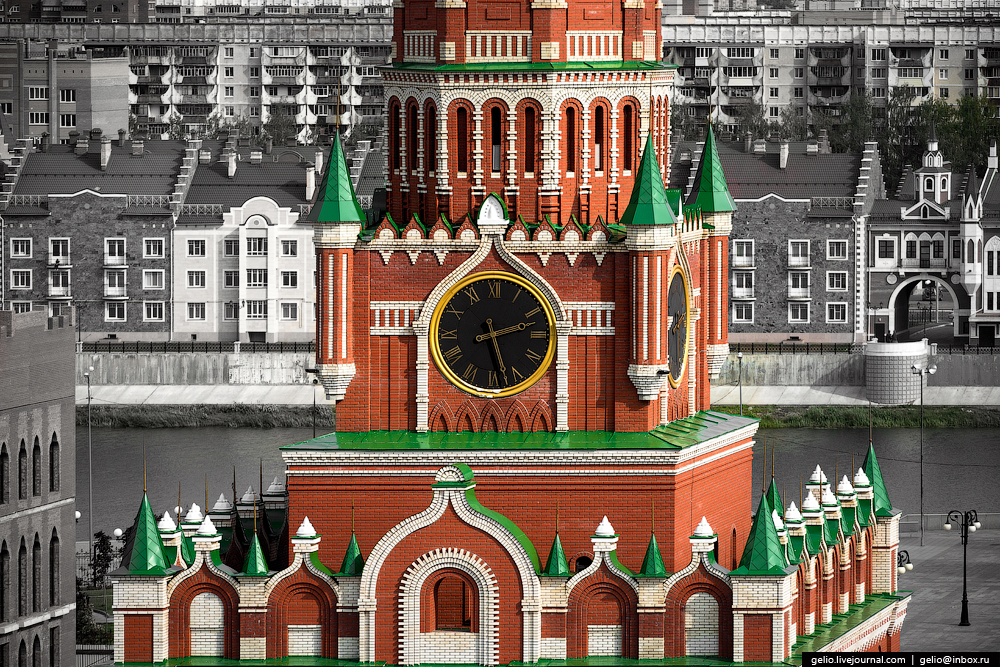 Just four hundred metres from the Annunciation Tower on the other Bank of the river Malaya Kokshaga is situated Spasskaya Tower. For first time visitors to the city, the cultural sites are of particular note. Be sure and check out the wooden mansions dating back to the 18th century and soviet neoclassicism style municipal buildings of the 1920-1960. Yoshkar-Ola is also undergoing a major renovation of its city center, as well as a kind of architectural renaissance. 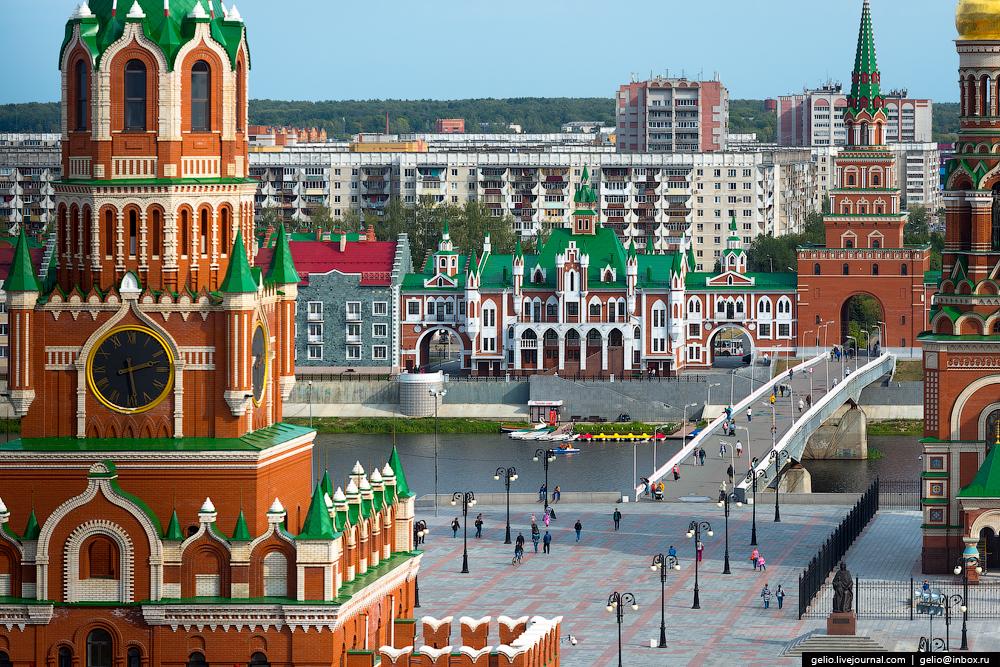 At night this medium sized Russian city comes alive with a dreamlike complexion emanating outward from Voskresenskaya embankment and the Cathedral of the Annunciation. 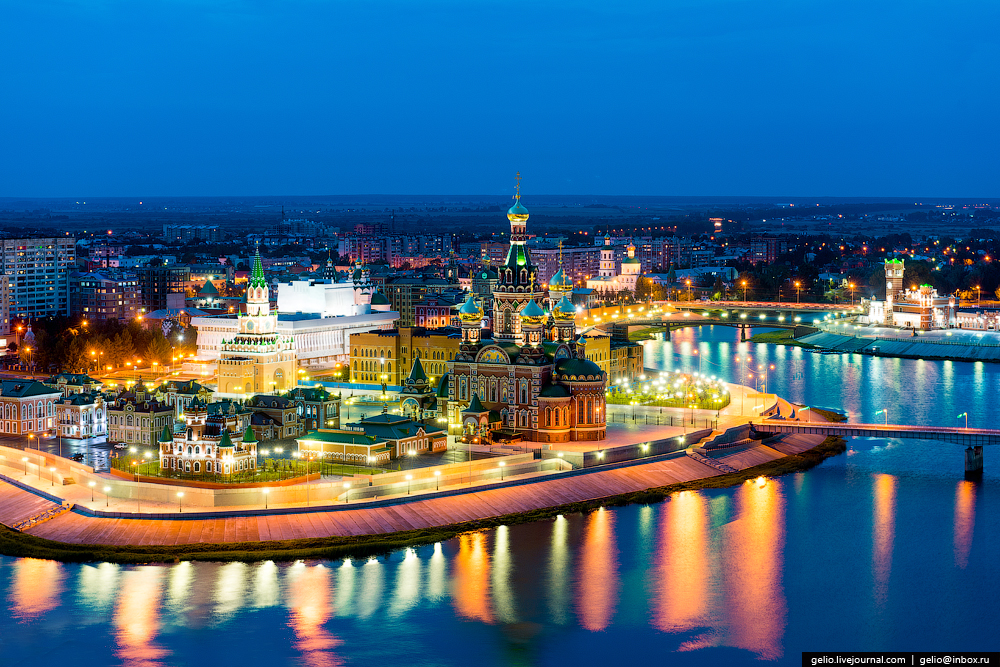 Voskresenskaya embankment and the square of the Republic and of the blessed virgin Mary.

Yoshkar-Ola is located in the region of temperate continental climate. This region has long cold and snowy winters. The average temperatures here range from minus 12 degrees Celsius in Winter, to plus 18.7 degrees Celsius in the heat of Summer. A few of the most visited attractions include; the Museum of the History of Yoshkar-Ola, the National Museum of the Republic of Mari El, the Republican Museum of Fine Arts, Obolensky-Nogotkov Square, and Patriarchal Square, just to name a few. Mari style embroidery, and wooden items such as “mari matryoshka” are a local specialty for those interesting in taking home a piece of this part of Russia.

For readers interested in more information, this official visitor site has lots more, and this Facebook aspect reveals some of the best shopping spots. Wiki Voyage also has lots of great information about visting the city.