TUI AG, one of the world’s most successful and well known travel tour groups, has just announced their Half Year Financial report. Furthermore, TUI’s CEO, Fritz Joussen now says his company is well positioned for growth. With Europe rapidly becoming a stagnant market over east vs west tensions, just how solid are TUI or any other big tour company’s projections? 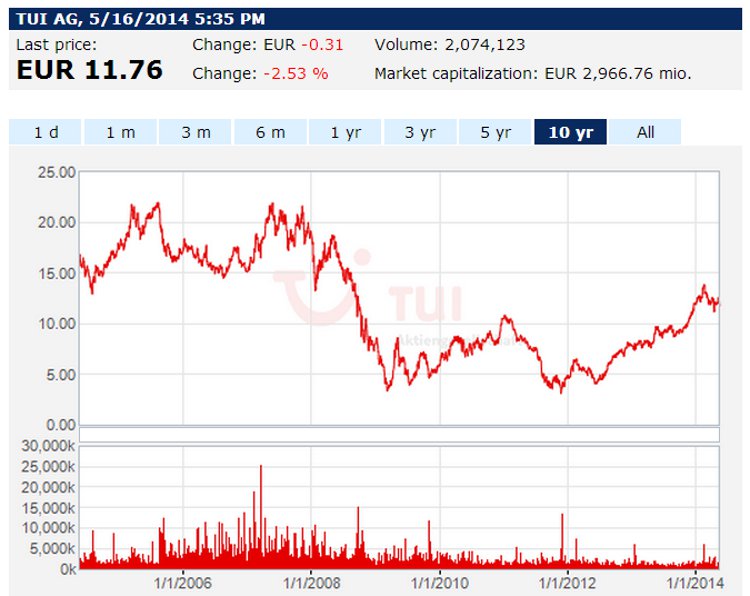 Ukraine. Right about now just the mention of the former Soviet republic conjures negativity and fear of an unknown business climate. If Vladimir Putin’s dreams for Sochi and Russia tourism at the Black Sea were dampened by west propaganda over the Sochi Games, Crimea and a whole region of countries dependent on investment and growth are now stymied. As for the TUI report last week, the company’s accountants have managed to somehow transform “losing a lot less money” into fuel for added growth potential from H1 pre-tax losses of some €345.7 million euro in red ink.

Furthermore, with TUI group hotel occupancy rates stagnant or down considerably, the CEO’s contentions only make sense if we are talking about bouncing off the bottom of the tourism revenue barrel. Look at the graphic below from their report. 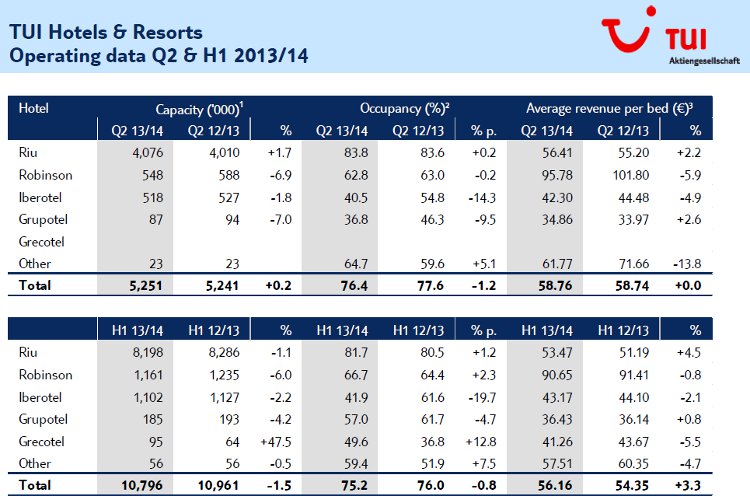 We know hotel owners struggling with 88% occupancy in towns across Europe, so projecting a positive with 50% occupancy is lunacy for TUI’s hotel segment. But TUI CEO Fritz Joussen strings things out farther:

“Lean structures and cost discipline are giving us latitude and room for manoeuvre for the future. We are fit for growth and are planning to grow again as a Group. This will open up potential for our shareholders, our business associates and our employees. A TUI delivering growth and investments will guarantee unique products and diversity of services for our customers. Group-owned hotels, clubs and cruise lines are maximum drivers of differentiation as perceived by our customers and make us stand out.”

I picked one of  the above hotels at random, just to do a loose evaluation of movement in the digital space. Grupotel, as you can see above, is a large chain in Spain which is hovering at 57% occupancy. From a digital standpoint it’s clear they’re not getting direct website bookings, and it’s also clear the links to their social media presences on Facebook and Twitter are not working. Not to be too picky here, but a major hotel chain anywhere in the world focused on growth, has to be aligned with marketing channels. Their twitter channel is in Spanish, but Spain’s biggest tourist demographic is UK, French and Nordic in that order.

Looking further into TUI hotel possibility, Grupotel’s Barcelona three star property Grupotel Gravina got the nod on twitter (tweet below) over an Instagram share. Even inept as TUI’s social outreach is, somebody has been trying to pay attention at Grupotel, albeit in a language few visitors will understand.

The point I am trying to make is, a company with TUI’s resources should be able to do a lot better than make fluffy some losing numbers. Taking this to the home front, there’s a TUI office 50 meters from the front doors of our offices here in Germany. In the 7 years I’ve been here, I’ve seldom seen a customer inside that office. In fact, I tried to give TUI some publicity a few years back by interviewing the local manager. Do you know what? They saw my camera and nearly had a panic attack, asking me to leave before I could even speak. Don’t get me wrong, I actually like this company a lot. But they are, in my view, decidedly not in position for growth as suggested. Nobody in Europe is just now.

Now can TUI optimize and expand on the business they have? Certainly. Providing better services, doing marketing better, and modernizing at every property (often without added cost) can elevate any company’s bottom line. Facts are facts though. Rock bottom prices, cut rate services, relying on OTAs for bookings almost solely, and playing the stock market is not going to be a sustainable business model much longer. Lagging social media, technology, and/or marketing strategies are just indicative of failure. 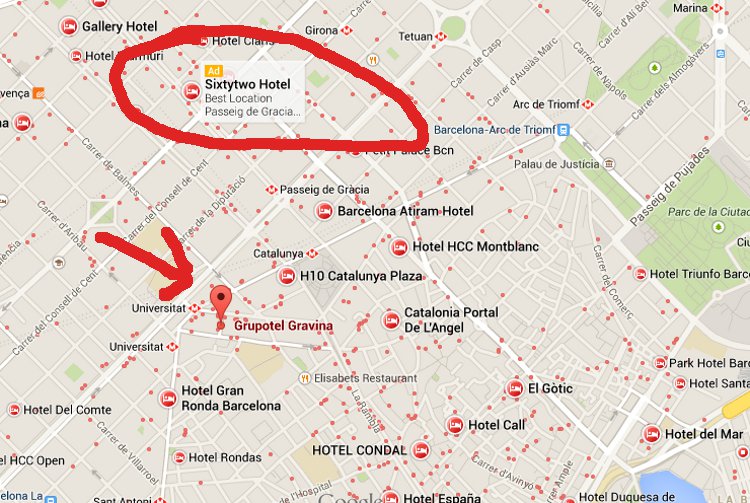 Sixtytwo Hotel map ad – this will show up on mobile prevalently.

Put it this way, Grupotel would be better off throwing all their marketing into Google ads than playing at social media. Take a look at the image above. The hotel you see circled, the Sixtytwo Hotel around the corner from Grupotel Gravina, shows up in this map search so. This hotel has no Twitter or Facebook I could find, but has essentially the same digital footprint visibility wise Grupotel does. This indicates a delinquency of thinking and strategy for TUI as well. And I’m not being critical to be mean or negative here. The most successful hotel group for TUI, Grecotel, shows the company does in fact know how to market rooms. So perhaps the lacking hotel arms of TUI’s empire are just underfunded marketing channel wise? Focus on Greece is not a bad idea, but it sure leaves a lot of other hotel people out in the cold.

TUI customer numbers, even according to their own H1 report, are down almost 8%. In Germany customers slumped 13%, but in France tour operators left TUI at a clip of almost 40% so far this half. Growth? I guess the only direction to go is up at this point. The growth Fritz Joussen must be talking about is share price. As for real world service and hospitality where it counts, guest experience, there’s no sign for me lower revenues and customer numbers will ever equal superb business. This is why I think TUI’s most recent report is fluff. And fluff in this day and time, only gets a few investors a short term win on margin.

Time for TUI to invest in the reality of tourism hard currency. To truly compete. Write me if you want to know how.

Can Airbnb Continue to Expand as Before?
Hopper Taps Into Hostaway Client Base in Lastest Strategy Move
AI-Powered Pathfndr Announces a Slew of New Features
“Wheel the World” Hurdles Travel Barriers for Travelers Using Tech
Previous: European Coastal Airlines to Serve up Croatian Islands
Next: AWTE 60 for 60 to Pick Top Women in Travel