For adventurous wildlife lovers, a trip abroad presents an exhilarating and rewarding challenge where the natural world opens up to reveal a splendid array of memorable and moving moments.

From the landscapes encountered on a trekking tour to the wild immersion experienced on safari holidays, there’s no end of opportunities to get up close and personal to some of our planet’s most awesome natural sights.

And what better way to tick off all the wild beasts you encounter, than with an awesome game of Deadliest Animal Top Trumps?

With few natural predators and a reputation for extreme retaliation when cornered, the honey badger is a legendary carnivore belying its cutesy name. 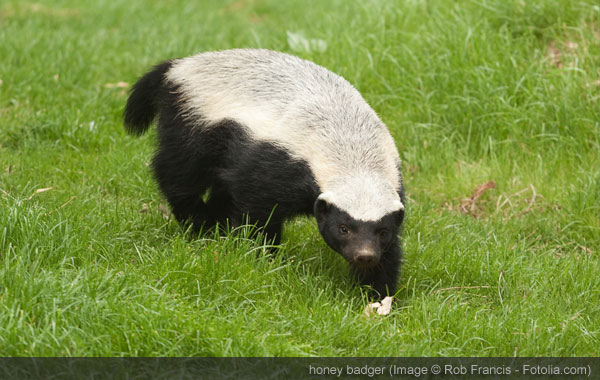 Thanks to the badger’s powerful jaws, sharp claws and impenetrable saggy skin it’s very difficult to cull which makes it one of the best adapted survivors in the wild.

The aptly named Phyllobates terribilis is a poison dart frog that is so venomous that animals are known to have died after touching surfaces on which the frog has walked.
Small, colourful and deadly, most wild frogs carry a dose strong enough to kill a couple of African Bull Elephants!

Although an endangered species this classic carnivore, which was immortalised in The Tiger poem by William Blake, commands instant respect for both its beauty and its power.

Heavier and stronger than a lion, there’s no disputing that the tiger is one of nature’s most attractive killers.

As the world’s longest venomous snake you’d be well within your rights to stay clear especially when confronted by a rearing, hissing, neck-extended version of Kipling’s Nagaina.

With 1.5cm fangs emitting paralysis inducing venom, it’s easy to see why this reptile is the stuff of myths and superstitions especially amongst the snake charmers of Burma and India.

Strength: muscular and lithe – 3
Aggression: avoids confrontation however, when provoked, will rear up, hiss and strike – 2
Size: up to 5.6 metres in length – 3
Agility: slippery customers with flexible jaws – 3
Venom: the world’s longest most venomous snake which can shoot neurotoxin into a victim’s central nervous system – 5
Total danger score: 16

Dominant, massive and aggressive the hippo is the undisputed king of the rivers and lakes of Africa.

This giant is no slouch on land either and will happily attack humans without any apparent provocation.

Zulu warriors regarded the hippo as the King of the beasts with their anthem citing: “He is a lion. Yes, he is better than a lion—he is a hippopotamus.”

This vicious little critter from Down Under is not someone that you’d like to invite to your family picnic. Renowned for their aggressive behaviour and powerful stings the Bull Ant has an innate desire to survive through destruction of opposition.

When cut in half the Bull Ant’s head and tail will fight to the death which can last for anything up to half an hour.

Strength: carry up to 50 times their own weight – 5
Aggression: many ants appear from battle with the heads and mandibles of the vanquished trapped in a death grip around their own necks – 4
Size: 40mms in length – 1
Agility: brilliant climbers – 4
Venom: powerful stings submit formic acid which can result in anaphylactic shock – 4
Total danger score: 18

Easy to kill, but only after its taken more than its fair share of your blood, the mosquito holds the title of the most hated animal in the world.

An altogether unwanted guest on some but not all adventure holidays, this tiny and irritating insect has been infecting humans with malaria for over 50,000 years.

Our guest author, Chris, is an animal lover who is looking forward to undertaking a couple of safari holidays in the wilds of Africa.

Campspot Publishes the Top Outdoor Travel Trends for 2023
Ideas to Make the Most of Your Visit to Phuket
Trends Say Americans Guarded Over Travel 2022
27 Inspirational Travel Quotes to Fire Up Your 2022 Travel Bug
Previous: Top 5 Activities for a Holiday in Toronto
Next: Hotel Spotlight: W Hotel Barcelona