Nucleus, a London-based brand consultancy with focus on travel and hospitality, released a series of mobile web browsing metrics on Tuesday. According to a survey, mobile traffic grew to 43% of all travel website traffic in June 2014. 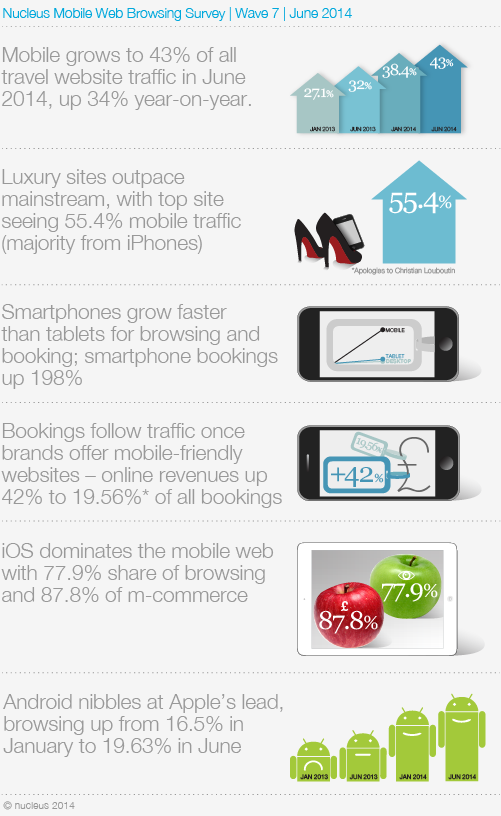 The survey revealed that Apple continues to retain a leading position, with 77.9% OS share and 87.8% of bookings, but Android is coming slowly from behind, with 19.63% OS share in June, compared to 16.5% in January 2014. Nucleus also revealed that luxury sites count for 55.4% mobile traffic.

When it comes to devices used for bookings, smartphones have a greater share than tablets: bookings on smartphones grew 198% y-o-y, compared to PC’s +15% and tablets +17%. This metric is not only indicative of a trend, but of a natural evolution, anticipated by many experts to grow even further.

Although conversion rates on mobile devices lag those registered on desktop devices, the data provided by Nucleus suggests a major change in the near future. For hoteliers and other hospitality professionals, this is a sign that the age of the desktop is passe, and that they should develop mobile sites as soon as possible. Many hoteliers have already developed sites based on RWD (responsive web design) technologies, but this is not enough. Smartphone-ready sites need a straightforward approach that allows users to book with confidence, without compromising their data and privacy.