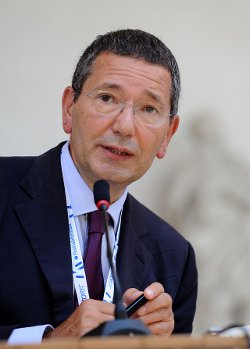 In answer to a British Foreign Office warning to vacationers headed to Rome, the mayor of the city punches back condemning the warning as misinformation. According to the news, Mayor Ignazio Marino (left) says London is a far more dangerous place to visit than Rome.

In a news bit at La Stampa, the Rome mayor reacts to a travel advisory aimed at Italy pointing to petty crime there as an acute problem. The advisory warns tourists to pay particular attention to gangs that allegedly hassle or jostle tourists to distract, while other gang members snatch purses of life wallets. The report goes further to spotlight in particular Termini Station and the number 64 bus, which goes to St Peter’s Square in the Vatican.

As anybody traveling knows, major cities anywhere in the world have this same scenario played out every day. The so called “gangs” the British warning speaks of, these occur in London, or anywhere where large groups of people gather. This Virtual Tourist report tells of “gangs” in London performing the very same theft methods.

As for the notorious “Bus 64” that route is famous just like some areas of London. World famous traveler Rick Steves even tells of #64, plus being mugged in London. Travelers should always been on their guard to observe certain rules for crowded places and shady neighborhoods. Here’s some basic ones from Lonely Planet.