Romanian Tourism on the Rise in 2012 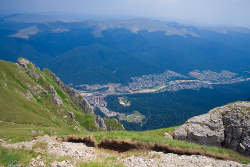 The Romanian tourism industry has been on the rise in 2012, according to the latest data from the National Institute of Statistics which show growth for several performance metrics for this sector. With more than 6.2 million foreign tourists visiting Romania in the first 9 months of the year, up 5.8% from last year, the country also reported increases for arrivals to touristic facilities, nights stayed with accommodation providers of all types, hotels doing particularly well this year.

Although a large number of foreign travelers have visited the Eastern European country, most of them chose not to stay with hotels, motels, bed-and-breakfasts or eco and agro-tourism providers in Romania. Of the six million arrivals, which were up 10.4% compared to the first 9 months of 2012, only 21,5% were foreign tourists. A little over 75% of the arrivals were at hotels, the rest being divided between other types of accommodation facilities.

The number of nights spent with local accommodation providers have also been on the rise in 2012. The 7.8% growth reported this year brought the total number to 15.2 million.

While in slightly lower percentages, the same up trend was consistent throughout the month of September 2012, all metrics indicating better results than in the previous year.