The Sphinx rock formation in the Carpathian Mountains, Romania 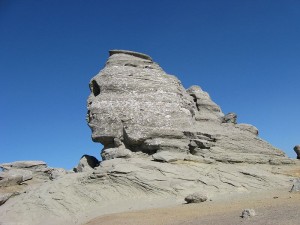 Research and Markets has just released their “Romania Tourism Report Q3 2012” report analyzing the country’s tourism industry and top players in the market which shows a downwards trend for the January-February 2012 period. The report is based on an analysis of statistical data on indicators such as the number of cross border foreign visitors, both by country and regions of Romania, including same-day visitors. Based on the analysis, the report shows the changing dynamics withing the past few years, along with the strengths and weaknesses of the local travel market.

Customs foreign visitor figures for the analyzed period – January to February – show a decrease of 2.3% on a year to year basis in arrivals. February was a record month in what negative growth is concerned, with a decrease of over 8%.

Focusing on airlines operating in Romania, the report shows the most important event was the collapse of Malév Hungarian Airlines in February 2012. The airline’s exit from the air travel market now offers interesting opportunities to competitor airlines that can cover the numerous routes previously served by Malev.

The hospitality sector, although still on an upward trend, did so at a much slower pace in the first two months of 2012, compared to the previous year. This comes at a time where BMI have also revised their forecasts and views on Romania in what the Romanian leu average exchange rate is concerned and the expansion of Hungarian low-cost airline Wizz Air, which will soon introduce flights between Arad and Milan.

The positive side is that the still weak leu is actually supporting the growth of the tourism sector. The report analyzes in detail airlines and other major tourism brands operating in Romania, such as Wizz Air, Hilton, Tarom or Unita Tourism Holding. To find out more about the report and how you can acquire it, please click here.