Explaining Incredible Crete and the Philoxenia Around Every Bend

The story I am about to tell you may seem more like a fairytale than fact. But everything you are about to read can be attributed to a phenomenon that is at once indescribable and as basic as a smile. There’s a kind of freedom that awaits you on Crete. It’s a gift that everyone who lives here wants to give. Here is part of that gift.

“Love of liberty, the refusal to accept your soul’s enslavement, not even in exchange for paradise; stalwart games over and above love and pain, over and above death; smashing even the most sacrosant of the molds when they are unable to contain you any longer – these are the great cries of Crete.” – Nikos  Kazantzakis

There’s a term I learned from a wonderful man named VanGos Tsourlakis when we first visited the island of Crete back in early Spring 2014. The word philoxenia is borrowed from the Ancient Greek term φῐλοξενῐ́ᾱ (philoxeníā), which loosely translated means; “a love of strangers, and an eagerness to show hospitality.” It is a special human characteristic attributed to all Greeks, but nowhere is felt more than on eternal Crete. 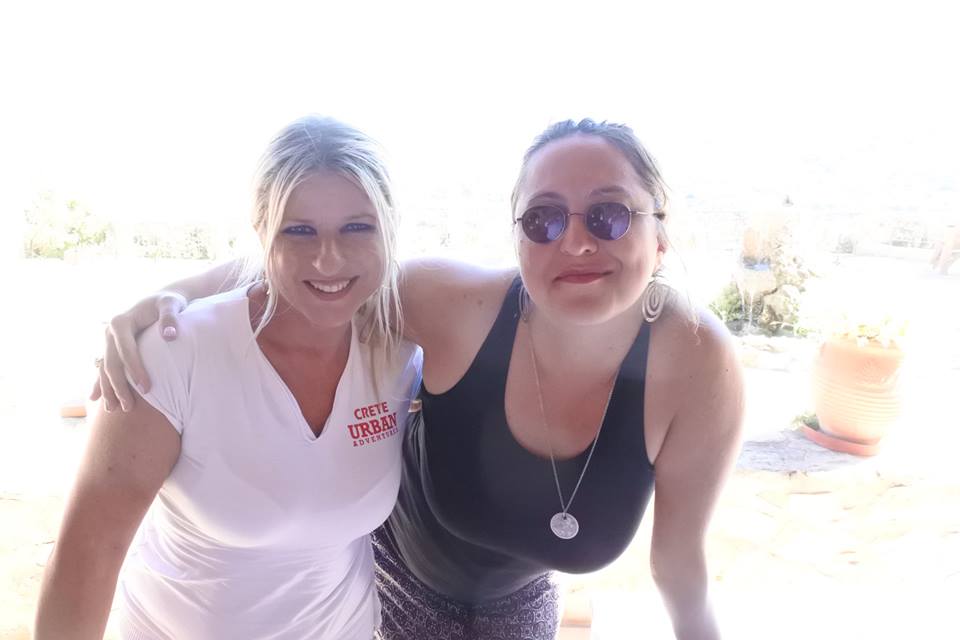 For years now I’ve wrestled with metaphors or an allegory that could help me convey the sacred nature of kindness and good intentions the people here possess. Well, something a college student I met told me the other day may help synthesize the essence for you. “It’s as if there is some force here in Crete that is bent on protecting us”, a total stranger I had engaged in conversation with told me. “Protected”, I thought. This is a key to understanding the mystic nature of this land of the Minoans, I now know it. 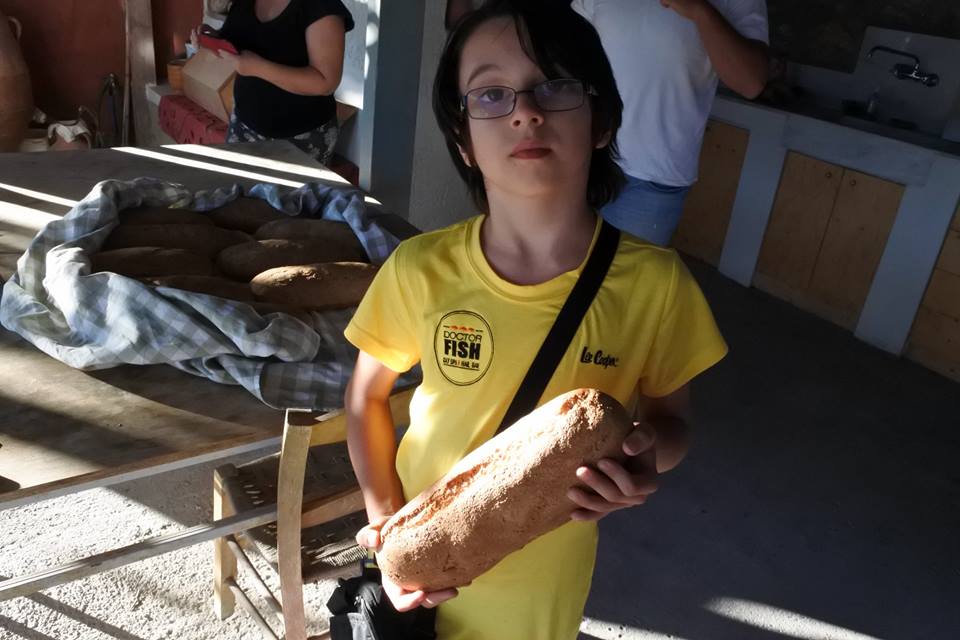 Ultimately, as parents, our mission is to convey our ideals to our children. Here Paul shows bread he made with his own two hands at Aravanes Tavern

Since our move here three weeks ago a string of events have convinced me we belonged here all along. Finding our current home by some strange stroke of luck, a wedding celebration with our longtime friend Minas and his wonderful wife Kalli, seeing our pal Lefteris for the first time in years, meeting new friends around every turn, there is an indescribable continuity going on since we arrived. This “protected” aspect, and the connection to the concept of philoxenia, Crete feels like there is an unbreakable silver thread running through the Cretans, tied to my little family, and reaching back to some sacred primeval spirit. I feel it, my wife Mihaela does, and our little boy Paul-Jules seems especially connected. We all felt this strongly during a day trip with Cretan Urban Adventures into the mountains of Rethymno Province. 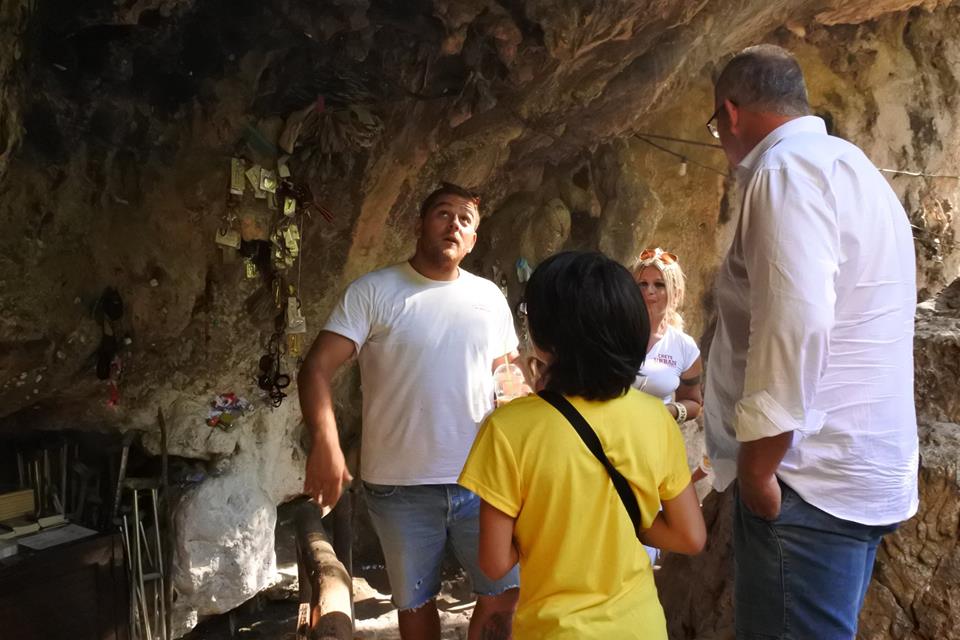 Our little group at the shrine to Hermes inside Patsos Gorge

At the invitation of Rebecca Skevaki, who’s the founder of Crete Urban Adventures, the three of us drove up to Arkadi Monastery above Rethymno. A tour of this sacred place on Crete, spending time at a one-of-a-kind Aravanes Tavern in picturesque Thrónos, harvesting grapes and stomping wine, and briefly exploring one of the island’s most fascinating gorges further revealed the real spirit of Crete. I talked with Rebecca’s colleague John Flaneur I began to synthesize for the first time why my family has been so attracted to the island. The draw is a natural one, some would call it magnetism. John, who’s literally the best-informed guide I ever met, is also symbolic of the Cretan people overall. Our conversations are a subject for future reports, but his pride and genuine understanding of his homeland represent real Crete philoxenia. If you will allow me – like forces do not always repel. Crete and the people who have lived here for millennia, they attract kindred souls. Maybe I can explain better. 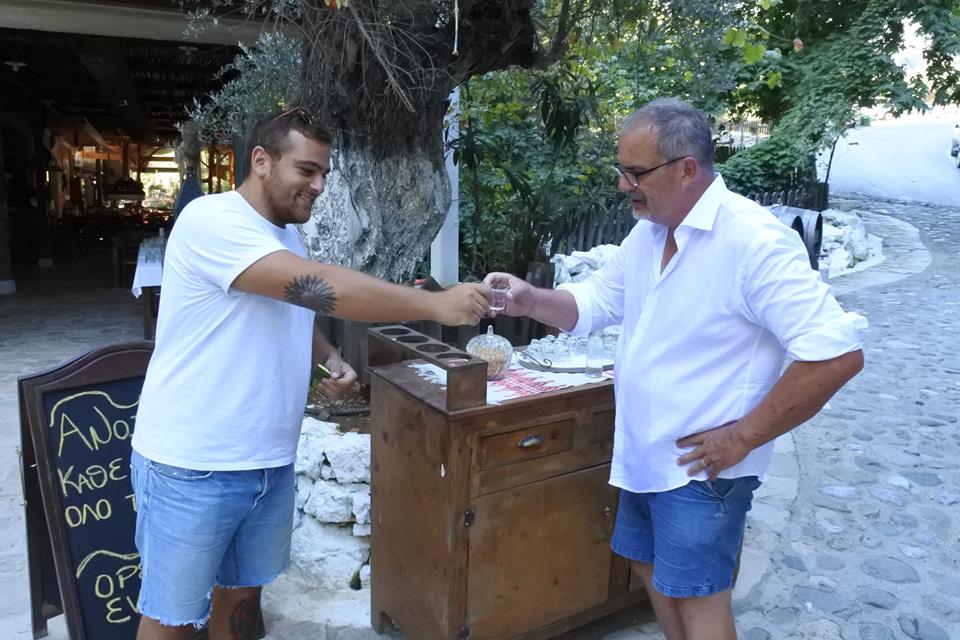 Just last evening I was telling my good friend Minas Liapakis (our ultimate Crete sensei) all about some of these experiences. In particular, a doctor we found through a friend for our little boy Paul-Jules made an indelible impact. That story goes something like this. Having registered Paul-Jules for the European School here (another story there), the need for the typical physical arose. Not knowing any physicians, naturally, we asked friends old and new who to see. As it turned out a new pal named Kostas recommended his children’s doctor, whose offices were not too far from Heraklion center. The short story I told Minas was about the doctor examining Paul without fanfare, insurance cards, or form filling – and his commenting what a great physical specimen our boy is. At length, when it came time to pay, the kindly gentleman refused but instead said; “You can pay next time, the boy is healthy as a bull. I did nothing.” 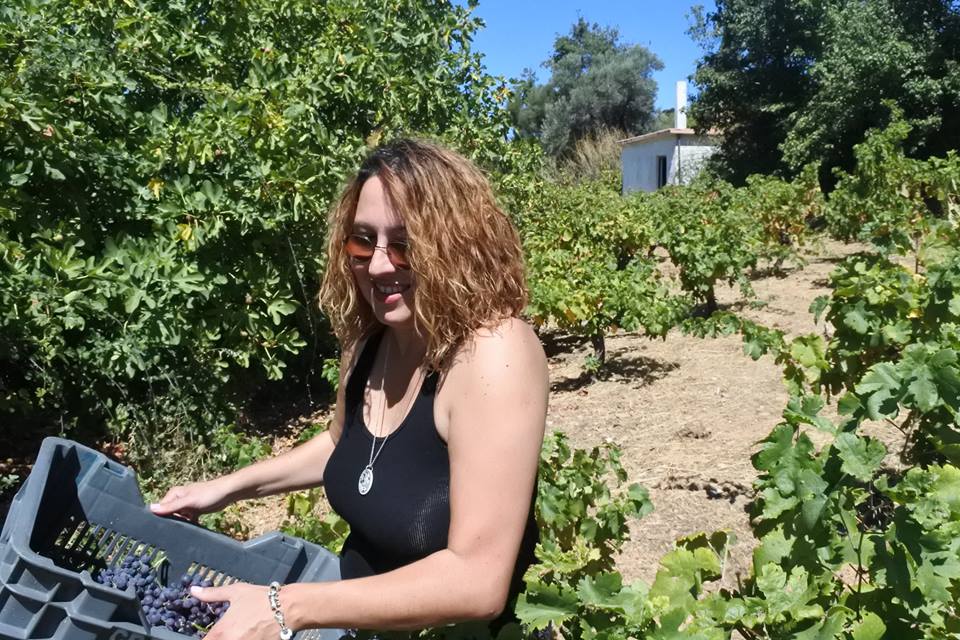 I told Minas that the last time I encountered this was with Dr. Pumpelly, who was a friend of my father’s, back in 1963 when I was a kid. Then the “protection” and the magnetic components of my theory became solid. Young readers may not immediately recognize what it means for a doctor to forego payment in such a situation. Many who read this will not believe in magnetic fields or the normative world of existentialists like me. But something Minas said fortifies my sincere belief in Crete’s spiritual uniqueness. After I’d told him the doctor story, Minas said simply, “So you found a real doctor?” But it was his retort for my astonishment at our overall Crete journey that was most meaningful. After I’d recounted Aravanes, Rebecca and John, the 86 year old stalwart farmer Iorgos, and the magnetic attraction of Patsos Gorge, my wise Cretan friend asked if I knew “why” all these things were happening to us. I suspected but asked Minas to tell me anyway. He told me, “Phil, the reason all this positivity is happening, is because the people here see themselves in your enthusiasm, in your genuine caring for them and this place, and they are happy.” He went on to express how Cretans feel about this land, and how many who come here never learn to really see or appreciate it. 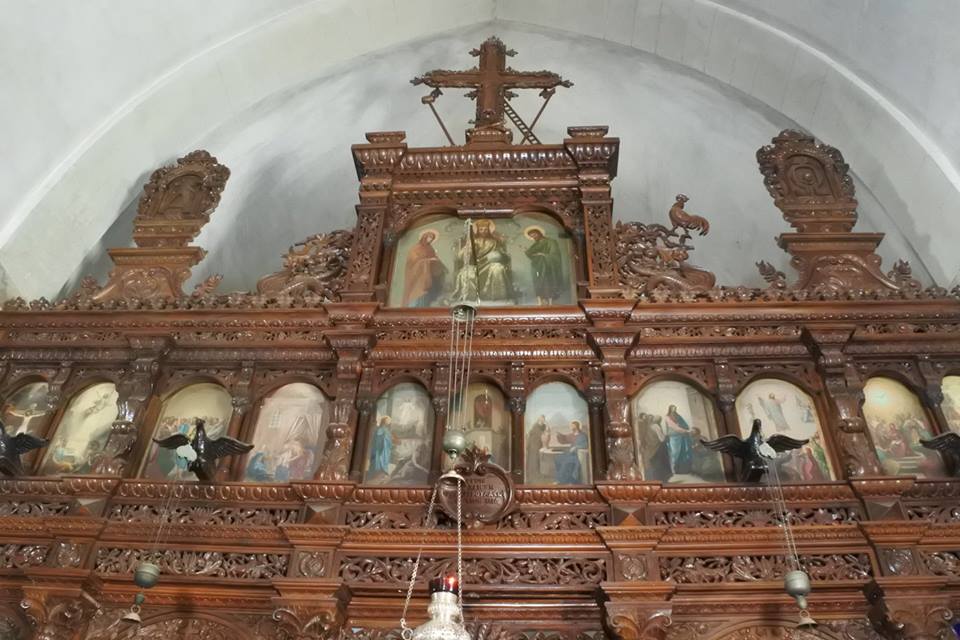 And there it was, the truth of Crete in all its genuineness. For a southern boy from America identifying with these people and this place can easily be expressed through the Lynyrd Skynyrd – Simple Man. As corny or cliche as it may sound, the magnetism of likeness boils down to recognizing one’s self. 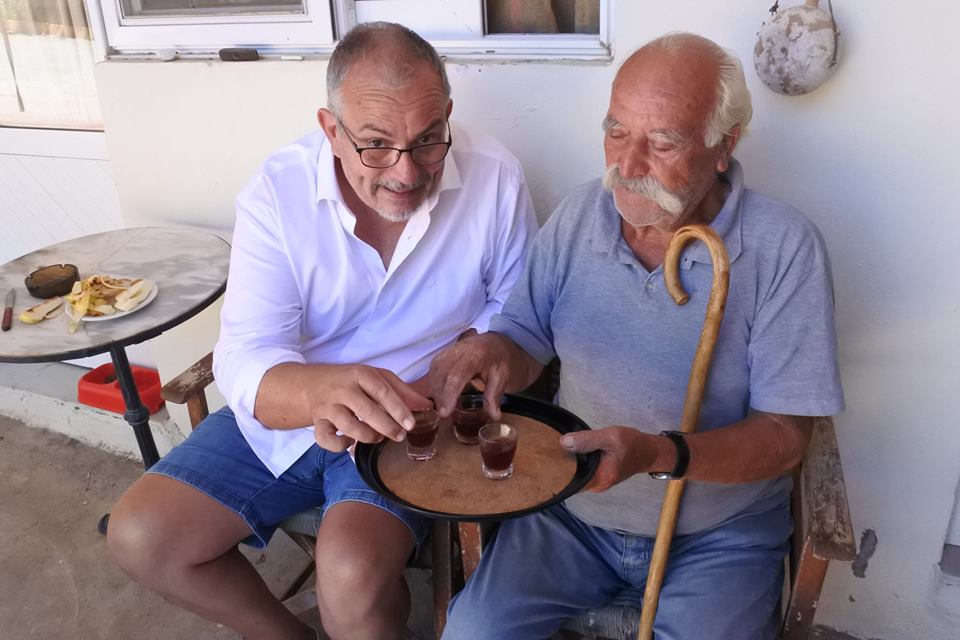 On the table beside 86 year-old Iorgos and I are slices of pear from my youth in Jesup, Georgia – By the way, Iorgos has a handshake like Putin

In 63 years I studied a lot, did a lot, went a lot of places, met a lot of people, and was ambitious as any. And when my real home (the idea of it) in America ceased to exist I felt lost in a wasteland of subterfuge and illegitimacy. For me and my family, for they are like me, the only place on Earth that beckons like home now is a thin island in the middle of the Mediterranian Sea.

Stay tuned, I’ll share as much of it as I can…

Freshwater “Miracles” of Crete Island
Karpathos Makes National Geographic 2023 Most Impressive List
Crete is Becoming a Top Winter Refuge and Remote Working Destination
The Keftiu: Were They Absorbed and Erased from History?
Previous: “Navarino Challenge 2017” – A program full of activities is announced
Next: Cobalt Air Announces Year-Round Flights to Cyprus from €88