According to news from the Bank of Greece, receipts from travel in January decreased by 4.7% year on year, corresponding to a decline in arrivals of 7.8%. Currently Greece’s deficit is at €742 million, up some €461 million euro from the same time last year. The news comes at the worst possible time as economic and political pressures mount in the region. Conflicting signals do not however, portray the real situation for Greek business. 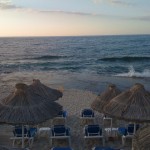 Reports from the bank show that these developments are attributable to many factors including the migrant crisis. Mirroring Turkey, which expects to see a loss of €12 billion in travel revenue, Greece is not much better off. Worse still, boatloads of migrants continue to arrive from Turkey in spite of the new deal with the EU. BBC reported more than 1,600 new migrants having reached the islands in the 36 hours since the measures came into effect on Sunday.

The UN Refugee Agency (UNHCR) reports some 1 million plus refugees having travel to Greece since 2015. Meanwhile, Austria and other EU nations are condemning Greece for not have harbored more than 10,000 refugees officially. In a case of European finger pointing policy making, it seems no one wants to alleviate the EU’s problem, but instead those of individual nations. Greece, almost wholly dependent on tourism compared to most European nations, has been given a one-two punch of economic and migratory issues of late.

Finally, the World Travel & Tourism Council has predicted that tourism will contribute some €46.7 billion to Greece’s GDP will reach 46.7 billion euros. The mixed message here being indicative of everything coming our of Greece right now. We talk with Greek hoteliers and service providers every week, and the truth of the situation there is more in line with what Bank of Greece reports. Even before the refugee crisis or the sanctions on Russia, Greece hospitality was at wit’s end over sunken revenues. Just about every hotel in the country is wrestling with solvency right now. Even the WTTC’s conservative figures predict tourism to drop 1.8 % or more in 2016.

In the broader picture, the Athens Stock Exchange closed on Monday with losses as the general price index shrunk by 1.25% and closed at at 541.70 points. Today, with the horrific terrorist attacks in Brussels on everyone’s mind, the exchange has rebounded slightly, but the year to date loss stands at 12.68% according to Bloomberg, as of this afternoon. Turning back to tourism news, massive bookings losses, cancellations of tours, and an already stagnant economy across Europe spell disaster for some operators. One example, the Island of Lesbos, lost 90% of its tourists since last year. Airlines have now dropped air connections to such places, and unless the situation is alleviated soon, a domino effect of lost tourism revenue is certain. If the Brussels attacks spur border closings and more travel difficulties, many Greece business are certain to founder.