Research recently conducted by the Heritage Foundation in the US shows the current state of economic freedom around the world. Where CIS countries are concerned, the study made several somewhat surprising findings. One such finding was the 38th position among 177 countries Armenia currently holds placing the small republic at the top of all CIS countries. 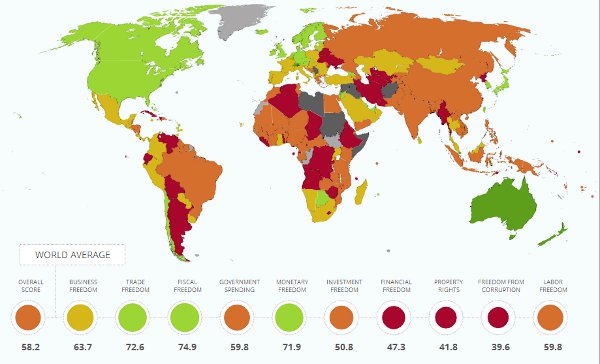 In the European region, which consists of 43 countries, Armenia is 17th position in terms of economic freedom by the Heritage Organization’s standards. Within the same zone as Armenia, Georgia at position 21 and Azerbaijan coming in at 88th are the republic’s closest competitors. Russia, interestingly, is nowhere near the top currently holding in 139th spot in the index.

The top 10 countries worldwide are as follows:

To quote directly from the index, Armenia’s position as a rising economic star is expressed so:

“Armenia’s economic freedom score is 69.4, making its economy the 38th freest in the 2013 Index. Its overall score has increased by 0.6 point from last year, mainly reflecting the better management of public spending. Armenia is ranked 17th among the 43 countries in the Europe region, and its score puts it above the world and regional averages.”

Relatively low unemployment and inflation, combined with a decent per capita income of $5,384, and 4.4 % growth, paint a positive picture for opportunities there. According to the Heritage Organization’s assessment, the country needs a stronger base of judicial independence and government transparency to become even more liberal where economic freedoms go.

To see all the rankings, methods, and categories of the study, please visit these pages.