In the coming months the Russian Federation will be ever increasingly in travel news leading up to Sochi 2014. For people in the online hotel booking space, and other hospitality sectors too, Russia presents a special set of potentials and hurdles as well, this is widely accepted. Many questions exist where online travel in Russia is concerned, we hope this post will clarify a few.

Oktogo dot ru, a startup geared to serve first Russia’s inbound tourist, is an innovative execution to solve Russian Federation travel pains online. At least this is a fairly accurate view of what the OTA professes and exhibits. We spoke with CEO and founder Marina Kolesnik this morning about where Oktogo.ru is, and where the company is going. Let’s look at a couple of things this Russia development is doing to solve for X, when X equals the vast possibility of tourism business in the world’s largest country.

Any number of startups have attempted to engage Russians where Internet and/or mobile channels are concerned, most with little or no success. From a personal standpoint, I have spoken many times with business people in Russia, and I will say with not so rewarding results for the most part. We needn’t get into “why” this is so, but to say doing in business there is “complicated” is well known. Traveling to, or even within the country can and is even more complicated for many – enter Oktogo.ru. 40 minutes on the phone with Marina Kolesnik (at lower right form her Facebook) and I understood one thing very clearly, this company understands ALL the problems for making money from online travel within that country. Let me explain. 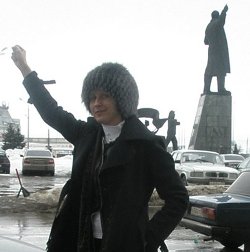 Russia’s tourism infrastructure for foreign visitors is widely accepted as nightmarish, we have reported on this many times. The free visa issue with the EU is actually just the tip of the iceberg in many regards. From what Kolesnik told me this morning, a far greater problem exists for anyone intent on entering the Russian Federation travel space, especially online. One major drawback being, 90% of Russians who travel book via brick and mortar travel agencies. Credit cards, convenient and accepted ways of “securing” services online, are simply non-existent according to the Oktogo CEO. Payment, despite the prosperity of Russian travelers, is a huge point of pain.

To simplify what Oktogo.ru actually does it is helpful to think of the leverage a power company that builds power sources and power lines has over a market. Sorry for the metaphor here, but Russia’s internal travel infrastructure is akin to what North America looked like before electricity his the prairie. Thousands of “mom and pop” operators, ten times as many suppliers, all vying for the same Russian ruble, so to speak. While outsiders flock to Moscow and St. Petersburg via Hotels.com or TripAdvisor etc., the average Russian asks his corner travel agent/butcher – and pays at the counter in cash or with a debit car, for the most part.

Now, factor in your Internet OTA, social networks not so many Russians really use, and a vast network no one has really ever had a handle on. Now, with that vision in mind, it’s easy to see what Ok-To-Go really stands for. Face it, anyone can create technical mechanics for online booking these days, all that takes is money. What no one but a Russian company can do, is build a network as vast as that needed to service ALL of Russia. It’s not about money as much as it is being local. At least this is how Kolesnik sees her mission, her company’s potential. And in this, anyone can see she is right. 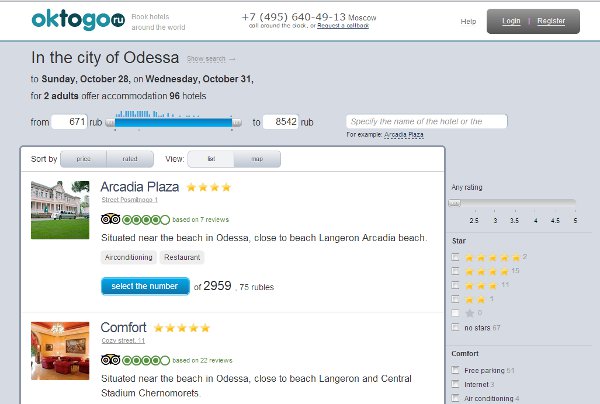 Oktogo.ru search in Odessa, Ukraine - painless but not pretty

Kolesnik almost took offence at my suggestion the startup is not a true innovation. Offense or no, technical innovations these days are actually very few and far between. What Oktogo is however, is a dramatic business innovation, I would say even a disruptive innovation where solving a massive problem is concerned. I can only imagine, having done business development for many companies, the task of establishing the network this CEO described to me over Skype this morning. 10,000 hotels in Russia, most tiny hostels or B&Bs, even apartments, and somehow Oktogo already has 40% of them! But, what about the booking portal? Let me break it down simply. 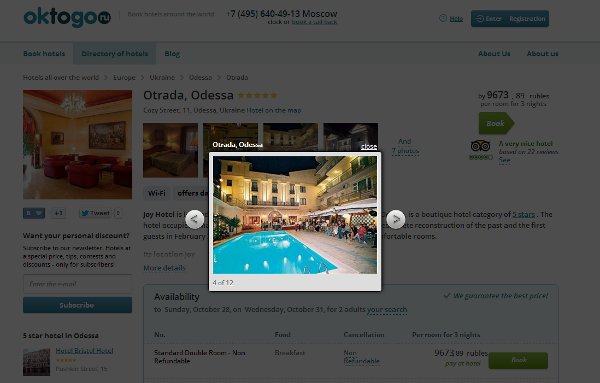 Oktogo.ru drill down - Russians clearly hate seeing where they are going :)

As you can see above, Oktogo is not exactly the iPad 2 when it comes to the potential people will rave about its design and function. However, this is not the point, is it? Expedia is ugly as sin, so is Orbitz, Hotels.com, and so on. What Oktogo.ru has up their sleeve is a big head start on creating a serviceable network of hospitality providers in Russia – linked online. The “linkage” part being most crucial. As for inbound tourists flocking to the OTA? There are many problems there, but when asked about competing with “no commission” competitors like Room Key and others, Kolesnik gave the patented; “We will constantly re-evaluate, adjust, and grow” answer, which is probably true and PR hype.

My issues with startups like Oktogo, having advised many similar ones in tech, is that it is clear to see the development is CEO-centric. What I mean by this is, any project or development, unless the outfit is very careful, will be overwhelmingly characteristic of the CEOs disposition. In the case of Kolesnik, a Harvard Business School sales strategist – it’s clear she runs a tight ship. Oktogo has an extraordinary business and sales interjection going on.

When I asserted opinion about and then asked her view on mobile being “the way”, her reply was a lesson in how Booking.com does not depend on mobile, blah, blah. Now I know someone can prove me wrong here, but Russians have about 2 SIMM cards each according to the latest data. Sure credit card issuance and use problems negate a dire need to immediately engage customers via mobile, hut…. To be honest, my partner and solved this one over lunch today. Bottom line, resistance in the face of virtual certainty would seem a stumbling block here.

The down side, if there is one, is that Harvard Business types are invariably immovable at times. Put mildly, being a genius in one area almost always results in being obtuse in others. I have rocket scientist friends (no mentions this time) who refuse to believe in anything normative. The end result is, they get behind. Proving everything proves difficult to do in time, you know? That said, Oktogo will make money, or rubles that is, and lots of them at that. The video below shows Oktogo.ru has spent some money well on promotion, despite my distractions.

A final rundown on pro’s and con’s reveals a few shortcomings that are pet peeves with me. For any startup with resource, and Oktogo has funding, engaging via Twitter and other social components is key to branding. Whether or not Russians use Twitter is irrelevant, as the rule should be “if you don’t do it well, don’t do it.” My SM assessment stated, The Moscow Times picked this startup as one of the top 10 Russian startups this year, for good reason.

Twitter for Oktogo is a broadcast element, following other people unheard of evidently. As for Facebook, whoever manages their SM here knows their business, FB posts are excellent. I will say this however, with a reach as broad as Oktogo claims to have, advising and adding FB pals from around Russia should be more prevalent than I see here. (advice) G+? They should not have bothered yet. VK dot com? Oktogo rules, and of the 140 million using VK, most are Russians – a big SM win here.

For the reader of this post in English, you stand about a 20% chance of using Oktogo when you travel to Russia next Summer. For the Russian who used Google translate or reads English, your next vacation will probably be via Oktogo. Let’s see how my assessment fares by next Summer. Without big plans for big time mobile engagement though… I call that lost opportunity costs.

Oktogo.ru Crunchbase info:
Oktogo is the leading Russian online hotel reservations agency. Designed specifically for Russian travelers, Oktogo.ru offers over 4,000 hotels in Russia and over 250,000 hotels worldwide. The Oktogo.ru website attracts over 1 million unique visitors each month via the Internet. With head office in St. Petersburg, Oktogo has the largest database of hotels online in the Russian regions including the north-west of Russia and Novosibirsk in Siberia.
Funding: $15 million from Mangrove Capital Partners and various partners.
Visitors: Roughly 1 million unique per month