Mostar, the Enchanted Gem of Bosnia and Herzegovina

Traces of troubled past lure at every step but the walk is peaceful on the cobbled streets of Mostar. You can hardly see signs of the war as the site was widely reconstructed and even Stari Most, the glorious Old Bridge that stood here for more than 425 years before being destroyed in 1993 by the Croats during the Bosnian War, was rebuilt. 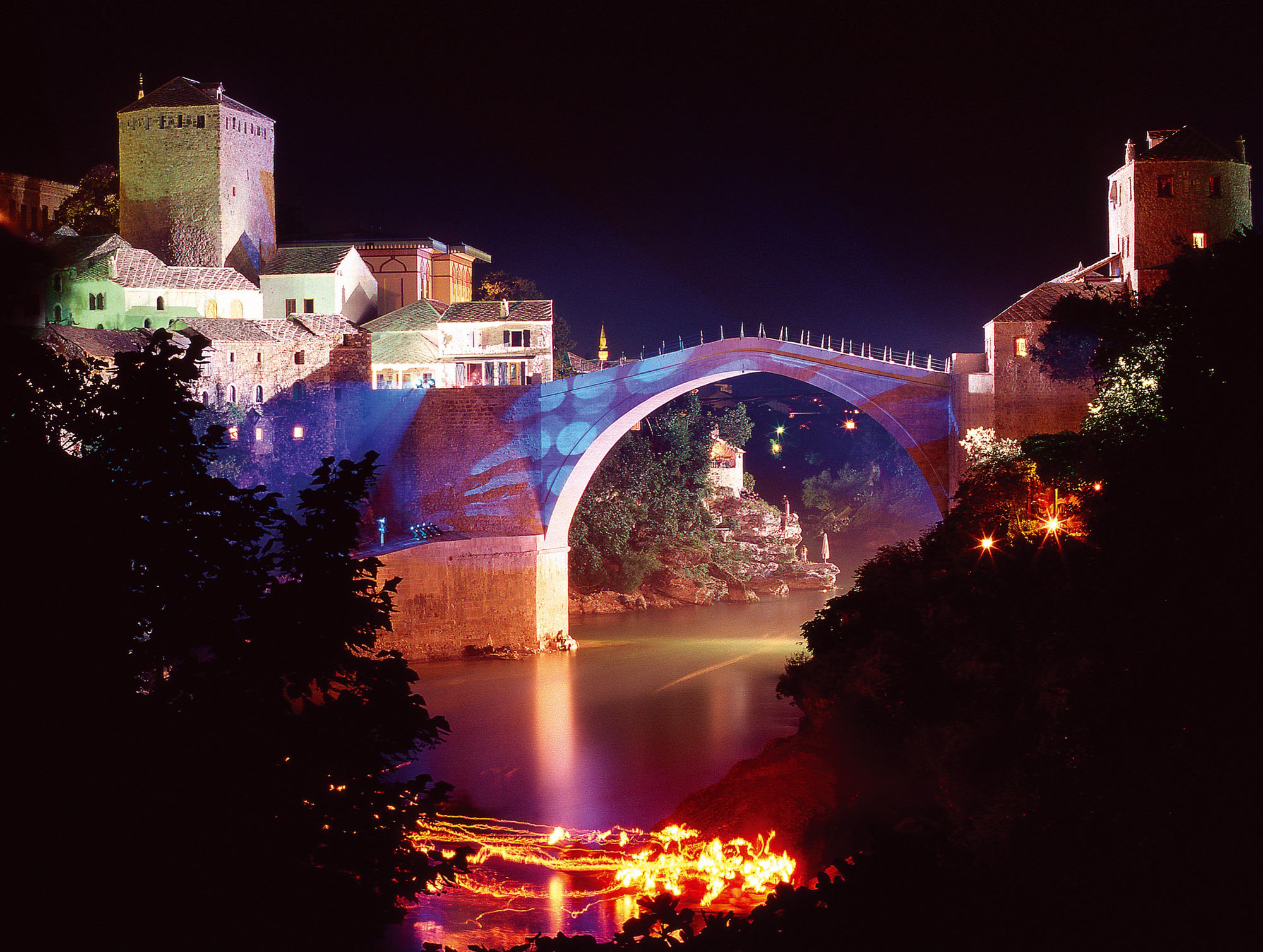 The replica of the bridge, an engineering miracle of its time, is now as beautiful as the original in any light, and it is a sign that life is back on track in Bosnia and Herzegovina. The war took its toll on the people of Mostar but with peace came the time to heal and now the Old Town with its bridge is a UNESCO World Heritage Site. It is a deserved accolade for the former Ottoman frontier town, celebrating its unique architectural features that combine pre-Ottoman, eastern Ottoman, Mediterranean and western European elements in an urban settlement like no other.

Mostar has the charm of a village not only for its architecture but also due to its small size. You cannot get lost on its streets no matter how hard you try. Halebija and Tara serve as landmarks for the enchanted tourist who strolls around to discover the secrets of the town: here a street vendor selling for pennies beautifully handcrafted souvenirs, there a lovely café serving Turkish coffee that tastes as bitter as goldenseal, here a restaurant waiting with unbelievably tasty treats, and somewhere, crossing the heart of the town, the cold emerald waters of Neretva, adding the splash of color that makes Mostar such a picturesque destination. 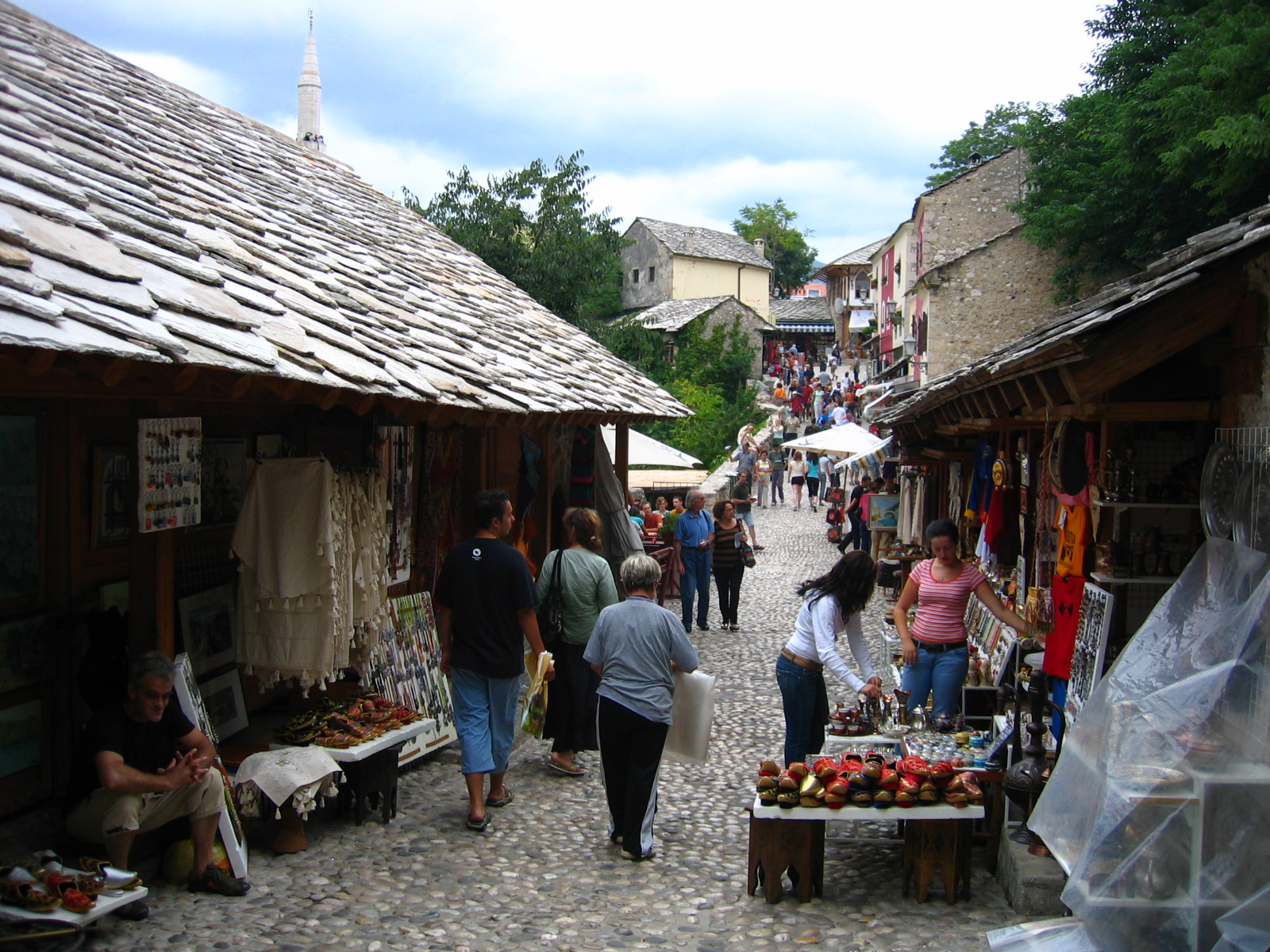 Bazaar on the Old Bridge in Mostar.

Falling in love with Mostar is easy. Contemporary doesn’t have a place in the Old Town – it would spoil its sense of eternity and balance. The food tastes better here because modern agricultural practices stay far. Organic growing is the norm, and you can taste it. Some of the best places to eat are right by the river, in quaint cafes that look over the water. The food seems to taste even better accompanied by such refreshing sights.

Offseason life is sleepy, with very few places and attractions open for public visits. Summers are more appealing than colder months, particularly at the end of July, when the young men of Mostar dare to defy the river in a bold jump from the verge of Stari Most.

Besides the Old Bridge and its two towers, Halebija and Tara, Mostar offers visitors several other unique attractions: the War Photo Exhibition, the Karadjozbeg Mosque, Landbank, the Konak building and hillside with an Ottoman Clock Tower and Orthodox Church, Kriva Ćuprija bridge, Čejvan Ćehaja Mosque, the Koski Mehmed Paša Mosque compound, the Hamam, the Roznamedji Ibrahim Efendi Mosque, and much more. There are no dull moments in spite not having enough modern entertainment – well, unless you count the Rock School, the cinema, and the Pink Panther nightclub.

Mostar is also a budget traveler’s dream, with accommodation available from as low as 20 € per night in villas and hotels far from the center. Prices are ridiculously cheap in restaurants too. Of course, there’s appeal for luxury travelers as well, although you will not find here high-end spas or Michelin starred fine dining spots – but Prestige at Hotel Mepas hits the spot.

What If the Secrets of Keftiu Could Rescue Humanity’s Future?
Odd Christmas Traditions Around the World
The Connectedness of Beauty: A Secret of Crete Few People Know
Visit Greece – The Nation That Put the Elderly Last In A Crisis
Previous: Crete Welcomes Russian Cosmonauts – Honors Yuri Gagarin
Next: Airbnb to Sell Experiences Now