Those following the World Travel Market, one of the travel industry’s hottest events of the year, will be interested to learn about a new app that’s just been released.

World Travel Market’s new app has been designed to keep both participants and followers of the event up to date with all the latest goings on, before, during and after the big day.

The app builds on the success of last year’s version, adding a new scheduling feature that allows users to upload their own itinerary that they have planned for the WTM.

In addition, the app can be synchronized with the tools available on the WTM website, such as My WTM and WTM Connections, helping travel industry professionals to keep all of their plans and any changes they make well organized.

A bunch of other great features are incorporated into the app as well, including all the latest news, views and press releases from WTM; updates on the developments and plans of individual WTM exhibitors; social media integration; and the chance to view the full catalogue of exhibitors, events and speakers ahead of time.

The app also integrates the WTM blog for the first time, so that users can read and learn about a range of different travel industry sectors covered by WTM, while it also includes a map to help participants and visitors find their way around when the event kicks off on November 5 in London. 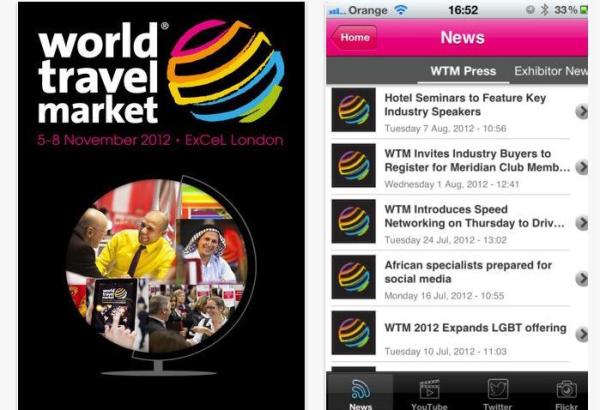 Simon Press, Director of World Travel Market, had this to say about the app:

“The WTM App is a great initiative which will improve all our participants’ experience at WTM, by increasing the ability to plan before WTM 2012 and maximise everybody’s time while attending the event.

“The App enables our audience to know everything about WTM at the touch of a button. It will allow visitors and exhibitors to interact with WTM from their mobile phones and encourage increased connections between exhibitors and visitors adding to the overall exhibition experience.

“The ability for this year’s App to be completely synced with the website meaning any updates made via a computer automatically appear in the App, improves its user-ability and functionality for all WTM participants.”

The app is available to download for free on both Android and iOS devices.