Spring is a wonderful season when nature comes back to life. Numerous traditions are associated with this period of the year, and some are kept until nowadays. Bulgaria welcomes the season with the Spring Festival in Kyustendil. This festival goes way back, to Thracian and Roman times when it was associated with the veneration of solar divinities. Back in 1966, the date 21 of March was declared an official festival and ever since people are getting together and celebrate spring here. 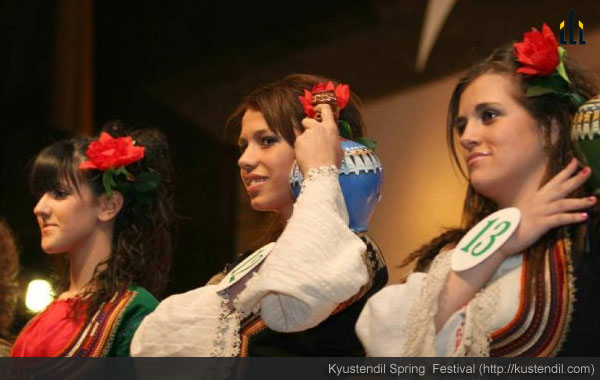 Things changed in time. The festival’s roots are connected to the Forty Holy Martyrs who are celebrated at the beginning of March, but now the festival has an important commercial part and several important activities.

One that definitely attracts public is the beauty contest Kyustendil Spring which is the first contest in Bulgaria choosing the most beautiful girl, according to the official site. Organized in the same period are carnival parades, celebrations in Hissarluka, cultural, sport and other events.

Every year, on 21st March, people gather together in the square and celebrate spring and then and later go to Hissarluka, a hill, situated south of the city, a spur of the mountain Osogovo.

After the beauty contest there is a concert that everybody enjoys, thus ending the day and the cultural program in a positive mood.

The Kyustendil Spring is in fact a blend of old elements and modern ones, but also a good moment to have a great time and welcome spring. Many people participate at this festival. For instance, in 2012 there were over 50,000 people who came in this small city to celebrate the spring equinox and had a blast as these photos show.