Crete offers a diverse culinary trip for travelers, even though the island’s traditional cuisine is the marque attraction for foodies. While the Mediterranean diet is well known and as healthy as advertised, the Cretan take on healthy eating is actually the oldest and most time honored. Ancient as this cooking tradition is though, fine eateries around the island offer unique twists on age old recipes. Here’s a sampling of superb restaurants of a kind.

Supplied by small local producers, the philosophy of the owners at Prima Plora is a simple one. The food you eat is only as excellent as the ingredients used to prepare it. On Crete, especially, you’ll find this simple logic in place nearly everywhere. But for unique places like this Rethymno eatery, “natural” is a way of life too. 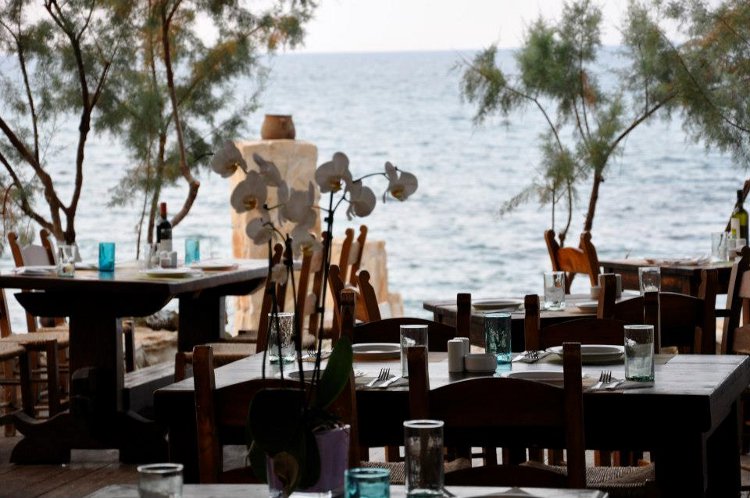 Situated just opposite the magnificent Fortrezza Castle on Rethymno’s waterfront, Prima Plora offers creative Greek cuisone with the Cretan flair for things. Touted by locals and visitors as maybe the best restaurant in town, this is a place full of atmosphere and aroma. While seafood delicacies dominate Prima Plora’s and most Crete restaurant menus, the cuisine on the island is fairly diverse. You might find it surprising, as we did the first time we dined on Crete, that meat plays a much bigger role than you might imagine in the Cretan diet. And to this end, Prima Plora excels in providing the best there is. The organic farm of Michael Vavouraki, 10 kilometers from Rethymno, is where the restaurant procures all its meats. 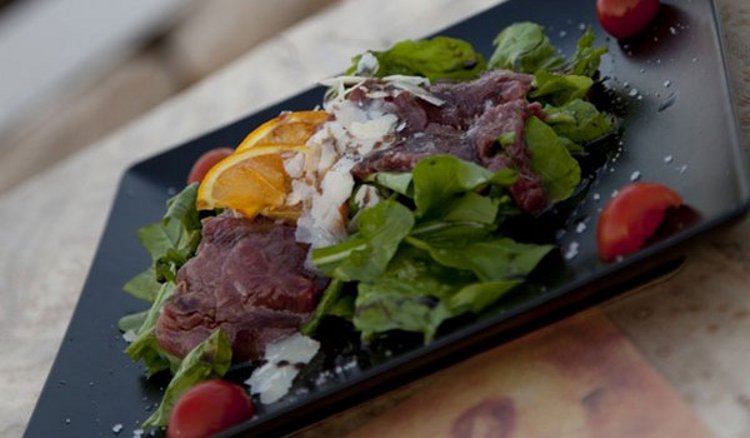 The family Fish restaurant “Akrogiali” is one of those places that blows tourists away with exceptional traditional Cretan fish preparations. If you’re looking for authentic, the family still uses their own fishing boat to supply the catch of the day for patrons, since four decades, no less. Voted one of the most friendly places to eat, on probably the most friendly island in the world, this charming traditional restaurant is a perennial favorite. Toss in a fabulous view, and… well, the image below pretty much says it all. 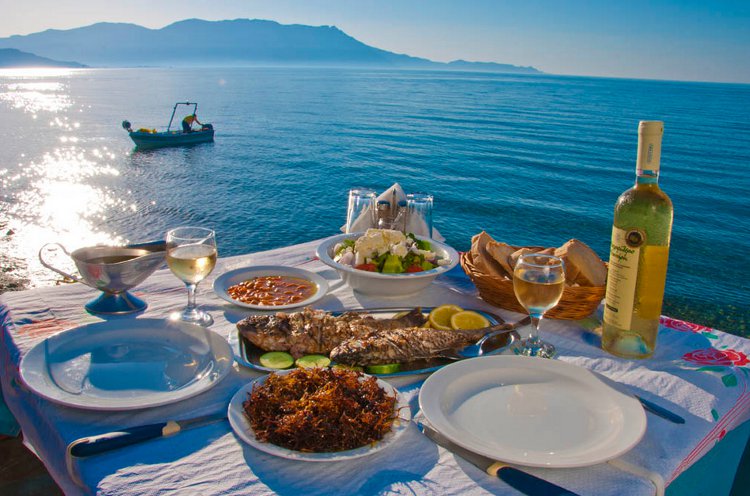 As is the case with most fine Cretan restaurants, everything about Akrogiali revolves around the now world famous health and longevity of the Cretans, and more specifically the lifestyle and diet. Simple foods, meticulously prepared and imbued with the famous Cretan olive oil you may have heard about, this is how it is at home in Crete. Olive oil, so you know, provides one third of the energy most Cretans need to carry on daily life. And a long life so many of them have.

Suggestions here include any of the fresh catch delicacies owner Costas Loukakas pulls into the boat from the Cretan Sea. Fresh local vegetables and other products highlight this marvelous restaurant in Kissamos too. You may contact the restaurant via: Loukakis Kostas Korfalonas, Kissamos, Ph: 30 28220 31410, Email: info@akrogiali-restaurant.gr, Facebook.

Situated in the mountains in between Rethymno and the coastal villages in the south along the Libyan Sea, this hideaway miracle of a local tavern in the village of Gulediana, is a treasure you’ll have to discover (it’s easy to find the second time). Organically grown products are lovingly crafted into ages old Cretan dishes discovered from owner/chef Costas Chamogiorgakis in his mother’s old recipe drawer. Forgotten by some, these unforgettable dishes combine lost herbs, spices, and flavors, into nutritionally perfect bits of gastronomical pleasure. 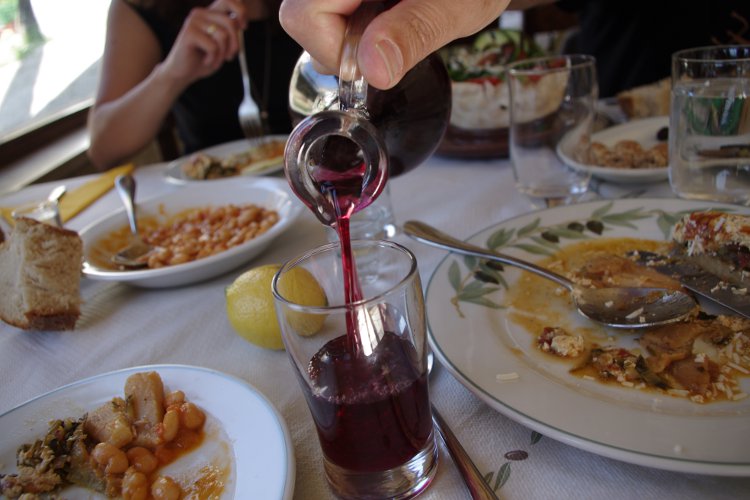 The food at Goules is impeccable yet unpretentious and tasty.

When all is said and done, Costas and his son, his other staff, are just downright kind and skilled Cretans, real people who care about what their reputation means. We discovered this very early on into dining there. The village is in the middle of what most people would consider nowhere, but as the lunch hour approached (about 2 oclock on Crete) every seat in the place was taken.

Like all the really great taverns on the island, Goules uses olive oil as a base ingredient. And like any great organic restaurant, Kostas hand selects everything from local farms and vineyards. Named for a famous pirate who retired from the sea in this area, Taverna Goules is one of those places you never forget. The village church, right across the street, the playful child and his dog, the old lady dressed in all black, goat herders, farmers, and a covey of Crete locals from all around dining, if being one with the locals is your bag, you’ll feel at home here. 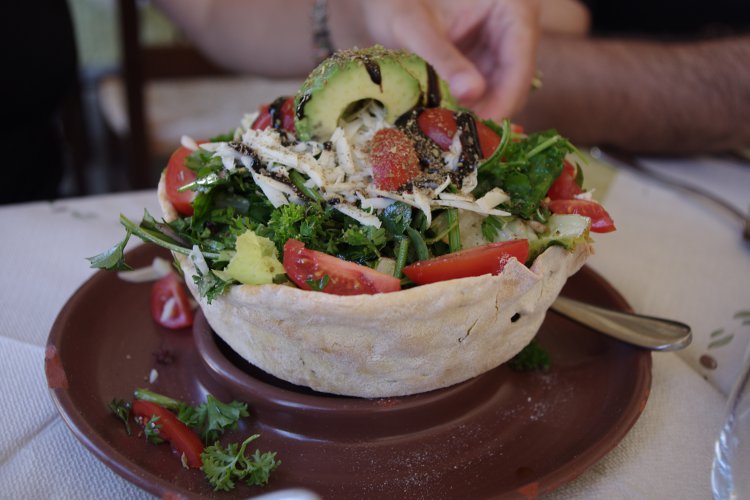 I am not a rabbit food person, but I wanted another salad after this one.

Suggestions include: the house salad (above) of greens so fresh they smell alive, super secret chickpeas that Costas would not give up the recipe for,  the best Raki on the island, and especially the pork in wine sauce you see immediately below. Is it time for lunch yet? 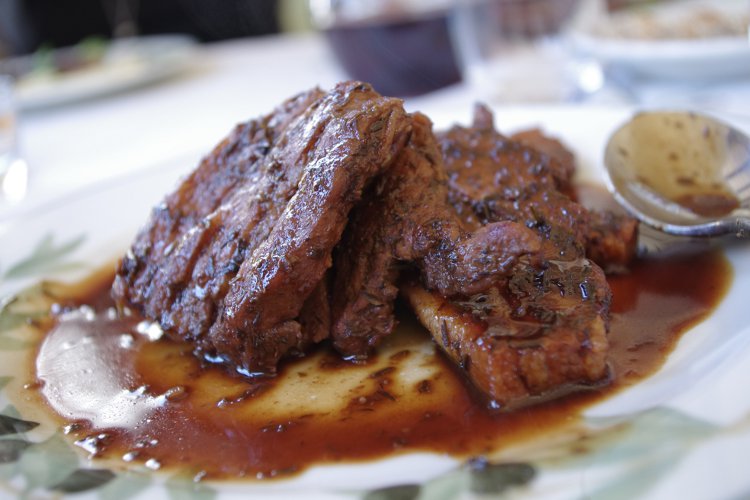 Contact Taverna Goules by visting: , the Village of Gulediana outside Rethymno past Armeni, by Ph: 30 28310 41001, Email: cohakis@hol.gr, or Facebook

To the east of Heraklion, the blossoming resort of Elouda offers the most touristic kind of beach experience to be found on Crete. Once a quaint fishing village, the glamorous resort hotels that moved in detracted some from the “local” flavor of this beautiful place. However busy Elounda Bay has become though, it’s places like Marilena Restaurant that keep alive the best Crete has to offer. Family owner, ultra hospitable, and with reasonably prices fish dishes and lcoal favorites to die for, this Cretan traditional eatery is a sure win for first time visitors. 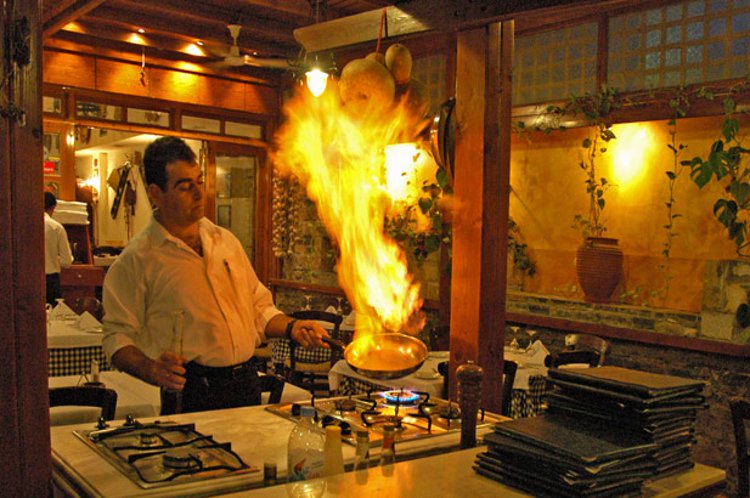 Owned and run by  two Greek Cypriot brothers, Michalis and Dimitris, this restaurant has the distinction of offering both traditional Greek and Cyprus cuisine, a combination most visitors find delectable. The restaurant has been around since the mid 1970’s, and is certainly one of Crete’s most famous.

Remember I said, Cretan cuisines can be diverse? For a taste fusion at its best, this exquisite Rethymno establishment is about as perfect as it gets. Atmosphere a plenty, and the very finest of culinary creativity to go along with strict traditionalist ideals, Avli does a great job of pleasing everyone. Almost scientifically, the restaurant dissects Cretan traditional cuisine for preserving it, as well as enhancing and artfully recreating it. For almost three decades, the restaurant has reconciled the far off past, and the modern flair of Crete today. 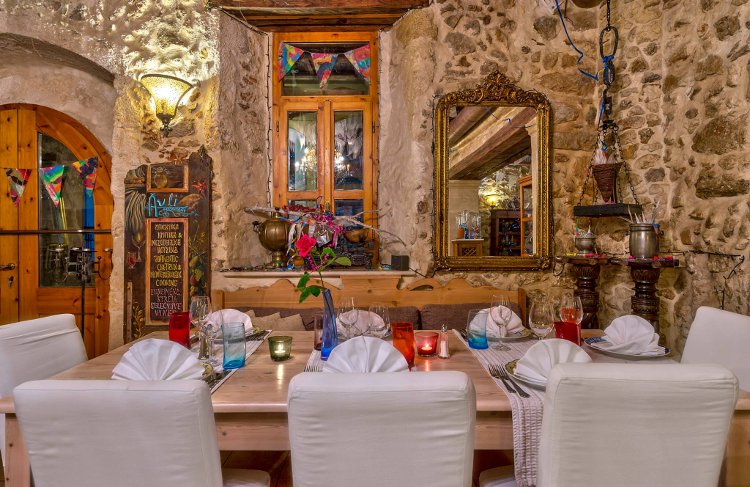 For the people of Crete, the secret to health and longevity is being in tune with nature. Cretans eat lots of olive products, fruits, vegetables, herbs, breads and dairy products along with their Raki (like grappa but NOT). Some 500 different varieties of greens and herbs frequent the tables of Crete, not to mention the myriad ways of preparing fish, beef, pork, and other dishes. At Avli, gastronomy is not about mixing flavors, it’s about the autonomous richness of tastes. Finally, not to be underestimated, the wonderful selection of local and international wines at the restaurant/lounge/hotel is a high point for most guests. As you can see by the image below, Avli is welcoming in every regard. 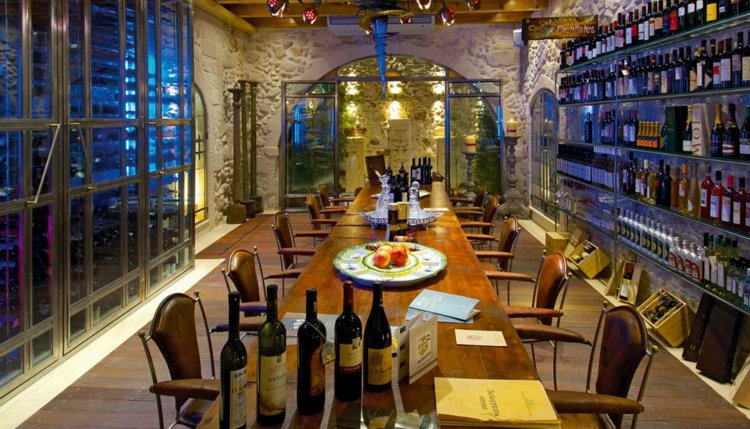 Suggestions from Avli’s menu include:  the scrumptious red mullet marinated in lime with stamnagathi (local greens) and octopus with fava and beetroot, any of the cheese appetizers or with mains dishes, and especially the Sfakiano (lamb with marvelous potatoes). Oh, and don’t leave without trying the Chochli (snails cooked in tomato sauce with veggies). Avli is a gourmet delight, without the exclusive gourmet prices.  Situated inside the hotel/apartments of the same name, you can contact Alvi via: Xanthoudidou 22 & Radamanthios Rethymnon, Ph: 30 28310 58250, Email: info@avli.gr, Facebook or Twitter.

Crete’s most famous panorama is arguably the view from Herb’s Garden. But as marvelous as the view of the Venetian Fortress in Heraklion, and the Cretan Sea beyond is, no restaurant lives by atmosphere alone. Guests of Lato Boutique Hotel* and hungry patrons passing by, experience the best in Cretan cuisine to perfect a dining experience in Crete’s capital. Chef Zinonas Christofidis is a master artists when it comes to variations on the organic, healthy, and tasty cuisine of Crete. We dined with Zinonas and Lato owner Lefteris Karatarakis in early Spring at Lato’s other gourmet restaurant, Billant. The fare there, as inventive and delicious as you can imagine, homey Cretan offerings with a touch of class and exclusivity, without the price. 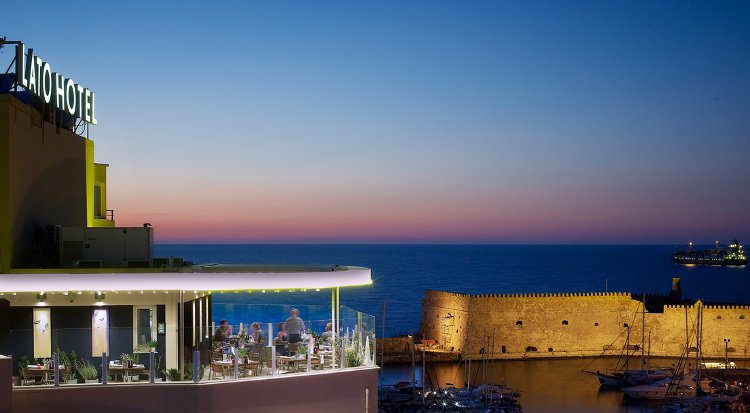 Suggestions, after you’re mesmerized by the view from the rooftop (above), include: Risotto with cuttlefish, finished with “muscat” wine & bay leaves, Lamb “souztoukakia”(Greek meatballs), with trimmed wheat & mint served with fresh cucumber, tomato & trimmed feta cheese, and the marvelously creative “Chaniotiki” Cretan meat pie filled with boiled goat. For the best caramelized chicken on the planet, dive into Christofidis’s one of a kind gastronomic treasure below. (It’s not on the Summer menu, so you’ll have to beg) 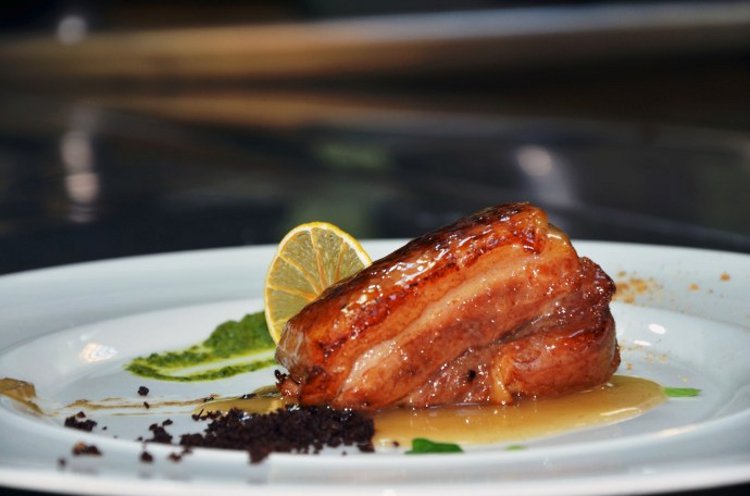 This Caramelized Chicken has been featured on top foodie blogs worldwide.

As with any superlative dining establishment, expect flawless service and the same Cretan exclusive smiles and genuineness the island is famous for here. Oh, and did we mention the view? Seriously, this is by far our favorite fine restaurant in Greece. You  may inquire or make reservations at Herb’s Garden via: 15 Epimenidou Street Heraklion, Ph: 30 281 033 4971, Email: fb@lato.gr, via Facebook or Twitter or using Foursquare.

*Lato Boutique Hotel is a client of one of our parent companies.