The Rail Baltica will link Tallinn in Estonia with Warsaw in Poland. Courtesy of Imageshack Link between central europe and the baltic states - the rail baltica

The Rail Baltica will link Tallinn in Estonia with Warsaw in Poland. Courtesy of Imageshack

The European Commissioner for Transport Siim Kallas insisted at the weekend that key Rail Baltica project could well become a viable alternative to air travel to the region.

Kallas said that project leaders need to show more ambition about the rail line, which will connect the Baltic States as far north as Tallinn with the rest of Europe via Warsaw in Poland.

However, the opinions of Kallas do not seem to be getting much support from the Lithuanian or Latvian prime ministers, who pointed out that the project is a work in progress.

Latvia’s Prime Minister Valdis Dombrovskis pointed out that his country had only just allocated the sum of 43 million Euros towards modernizing its railway infrastructure, in order to make it capable of supporting the faster trains seen in Western Europe.

Commenting on the project recently, Dombovskis said that “If only the Lithuanians could build their rail infrastructure faster, we could get the trains moving.” 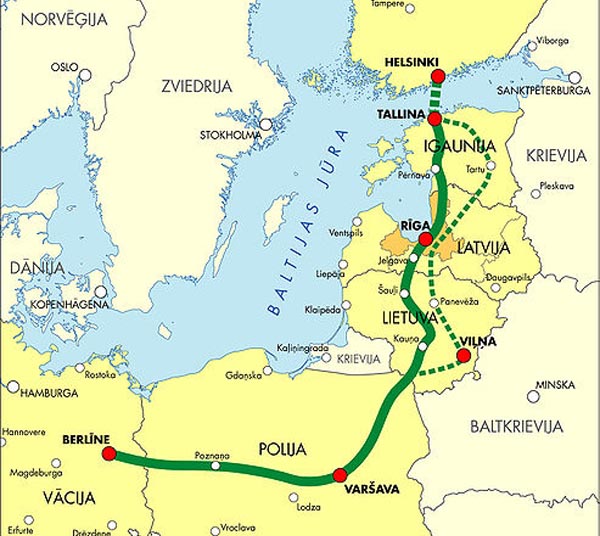 Map showing the proposed Rail Baltica line. Helsinki will eventually be connected via a tunnel. Courtesy of Wikimedia

Dombovskis also revealed that an alternative line between Moscow and Riga was also under consideration.

The Rail Baltica has been earmarked as one of the European Union Trans-European Transport Network’s priority projects, and is planned to establish a high-speed rail link between Scandinavia and Germany.

A continuous rail link is envisaged, from Estonia’s capital Tallinn, all the way to Warsaw in Poland via Riga and Kaunas. The Rail Baltica will also link up Tallinn with Helsinki in Finland, via existing commercial ferry operators, with an eventual undersea tunnel between the two cities, similar to that of the Channel Tunnel in the UK, also being mooted.

The overall length of the new railway line would be almost 600 miles from Warsaw to Tallinn.