A 5.8 magnitude earthquake that hit northern Italy last night, killed at least 17 people, injured some 360, and caused significant damage to some of the oldest buildings in Emilia-Romagna, destroying homes, churches (like the church of San Francesco in Mirandola, a fine Gothic church, which houses the tombs of the Pico family) and cultural landmarks (eg. Ducal Palace in Mantua).

The earthquake epicenter was 40 km (24 miles) NNW of Bologna, 59 km (36 miles) E of Parma, and 70 km (43 miles) S of Verona. Cavezzo, Medolla and Mirandola were the closest to the epicentre, but the quake was felt as far as Pisa, Venice, Milan and Bologna. 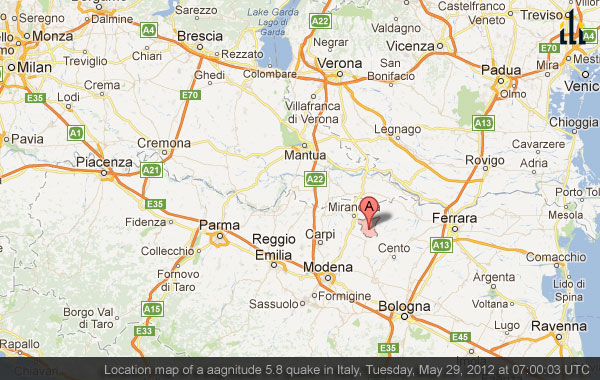 The Istituto Nazionale di Geofisica e Vulcanologia (National Institute of Geophysics and Volcanology) has reported that the quake was followed by at least 60 additional aftershocks, that caused panic among local populations. The magnitude of the shock oscillations recorded from a minimum of 2.0 to a maximum of 3.4 at 3:54 this morning.

This is the second major earthquake in the area, after a 6.0 magnitude thrust quake on May 20, at 4:04 a.m. (0204 GMT), which killed seven people and left thousands homeless. After both quakes, the number of homeless people in the region is now estimated at over 14000. 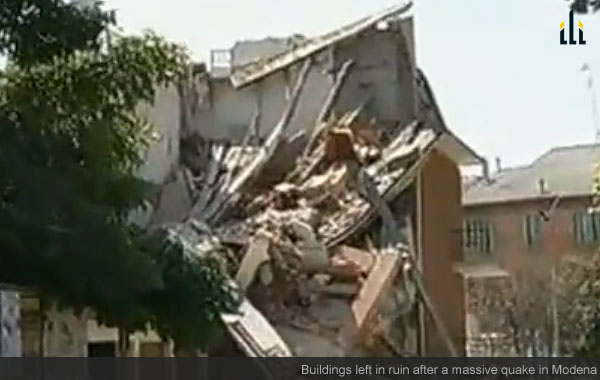 The two quakes struck one of the most popular tourist destinations in Italy, an area encompassing tourist cities like Modena and Bologna. Tourism however, is not the main industry here. This is were the world famous Italian cars are made – Ferrari and Lamborghini – but also an area rich in machinery companies that are critical for the national economy. Many factories and warehouses suffered extensive damage as well. Workers were killed in a factory in San Felice del Panaro. The quakes have thus crippled the potential for local and national economic growth. Ferrari, Maserati and Lamborghini reported no damage.