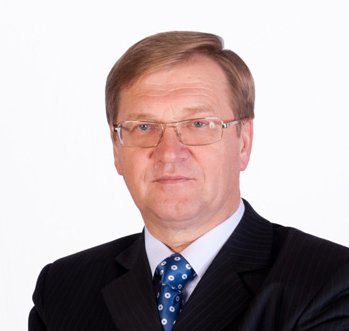 In news from Lithuania, the number of passenger trains en-route from Vilnius to Minsk in Belarus is scheduled to be increased this month. Lithuanian Railways having just acquired news Polish diesel trains, so new 140 km / h connects will now be possible.

Also according to the news the new cars will offer a more luxurious ride, with fares to match given the armchair accommodations etc. The time difference in between the two cities for the faster trains will be substantially different. Further reductions in time, taking the whole trip down to two and one half hours, are to be accomplished by having Belarus border guards conduct their inspections while trains are en-route.

Lithuanian Railways CEO Stasys Dailydka (at left) has been in the news and at high profile transportation events of late speaking about Lithuania’s infrastructure plans and his railways part in improving logistics in the region. Several ambitious projects have been revealed by Dailydka and his colleagues including these new high speed rail links.

The company reports double-decker trains will soon be in service as well, as the connects between Minsk and Vilnius are bolstered. Also, 160 kilometer per hour trains are in the works for the future, according to the Belarusian Telegraph.  More information and schedules can be found at the rail links provided or via Rail Dude.

Campspot Publishes the Top Outdoor Travel Trends for 2023
Ideas to Make the Most of Your Visit to Phuket
Trends Say Americans Guarded Over Travel 2022
27 Inspirational Travel Quotes to Fire Up Your 2022 Travel Bug
Previous: Eurovision 2013 Semi Sends Russia and Denmark to Forefront
Next: Krakow Photomont 2013 Promises “Best Ever” Photographic Fest