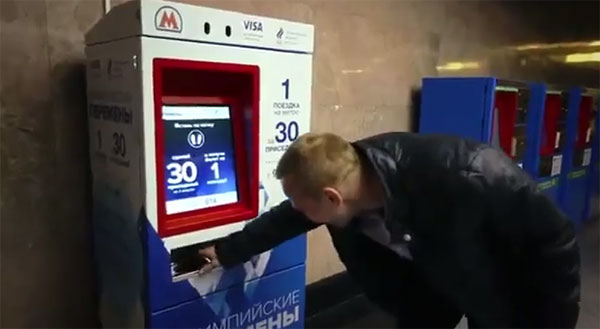 It may sound like a joke, but it’s not. Instead, this is a marketing strategy to promote the 2014 Sochi Winter Olympics. Travelers who take time for a brief fitness session in front of a vending machine, will end up paying 30 squats for a train ticket. In other words: keep the train ticket fee (30 rubles for a single-ride ticket) for something fun, and give your body the energy boost it deserves:

“We wanted to show that the Olympic Games is not just an international competition that people watch on TV, but that it is also about getting everyone involved in a sporting lifestyle,” Alexander Zhukov, president of the Russian Olympic Committee, told RIA-Novosti.

An idea by Olympic Change, this high-tech ticket machine only accepts exercise, and can even tell when you are cheating. The video below has received overwhelming international attention, and is currently among the top trending on YouTube.

Currently, there is only one such vending machine installed at the Vystavochaya metro station, and there are no news of more. The machine was inaugurated November 8, 2013, by several Olympic champions, including gymnast Alexei Nemov, and Olympic champion gymnast Yelena Zamolodchikova.