Most people don’t immediately think of water parks and super slides when they hear Abu Dhabi mentioned. However, news yesterday may change all that. The UAE’s first mega waterpark is scheduled to open January 24th with a total of 43 rides destined to get visitors all wet next year. 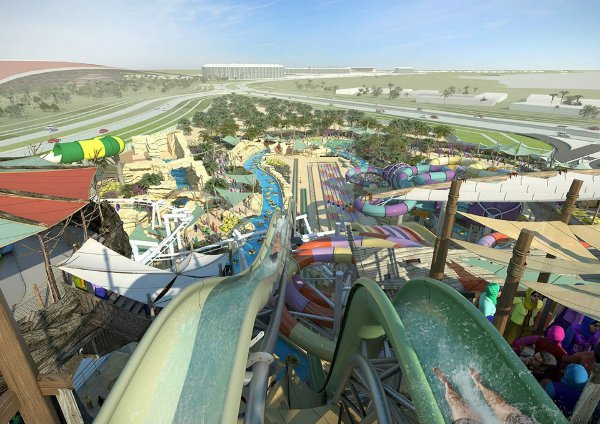 The so named Yas Waterworld Abu Dhabi stretches over 15 hectares and offers not only thrill rides but restaurants, shops, and other typical amusement park offerings. The key feature of the park, a glowing pearl atop a man made mountain, is also imbued with a giant falcon’s nest. Developed by Aldar Properties, the offers tribute to the UAE’s pearl-diving heritage. General Manager Mike Oswald, offered this via the company’s press release:

“All the rides, slides and attractions are installed and the pre-opening testing stage has commenced to ensure that everything is in place in terms of safe and successful park operations. A few members of the public will be given access to the park in the coming days…then it will be all aboard for the public opening.”

Sporting unique rides offered only via this Abu Dhabi venue, the developers are pulling out all stops to be differentiated. One rise, the Dawwama, is actually the world’s first hydromagnetic-powered 6-person tornado waterslide with a record breaking 238 metre run.

Interested reader can check out Yas Waterworld via the links above, or at their Facebook profile. The video below reveals not only a legend, but what looks like a fascinating new destination for UAE travelers.