The visitors of Romania’s capital can enjoy a 360 degree panorama of the city from SkyTower Bucharest. This tour was recently open and for two months each Friday, from 11:00 to 18:00, an entire floor awaits visitors who want to view for free the city from a height of 137 metres.

SkyTower, located on Barbu Vacarescu Boulevard in Bucharest, is easily accessible with public transportation – you can use the metro (Aurel Vlaicu station) or some busses and trams. This tower is the highest building in Bucharest, thus providing the highest observation point of the city. And, I might add, it is an interesting and lovely experience.

I was there just last week and I was pleased to see such an initiative in Bucharest. Moreover, you’ll see that this floor hosts also a photography exhibition with some really interesting shots from Romania.

In order to make the city’s observation more easy, there are various telescopes available, along with an invitation to “Redescover the city”. Unfortunately, at least for the moment, there aren’t any sightseeing scopes with audio explanations. I do hope though that such devices will be purchased and available soon (perhaps after these two first months with free access). However, starting this fall, a new mall is going to be open next to this tower, so many other spare time activities and shopping places will be available (plus a food court). No, there are no souvenir shops at this tower (downstairs or on the 34th floor), unfortunately as well. You will anyway be able to recognize some of the Bucharest’s parks, the famous Parliament House, you’ll see Baneasa airport, some airplanes exhibited in a yard (that f the Aviation Museum), you’ll notice some churches and other elements of Bucharest that will offer anyone, even to a complete stranger, an image of the city.

You’ll have to check-in when you get there and when you leave and you might be asked to kindly wait for several minutes so that a larger group of visitors would gather. We too had to wait a little, but wasn’t a problem.

I’m recommending you to have your camera (we didn’t planned this visit so we only had our smartphones with us) if you plan to take pictures. You’ll even see some ping-pong tables as the same floor is open to corporate employees each Thursday as an invitation to relaxing activities (RC cars racing, ping-pong, etc.) and I have to say that some young people were playing on Friday too, when we got there. 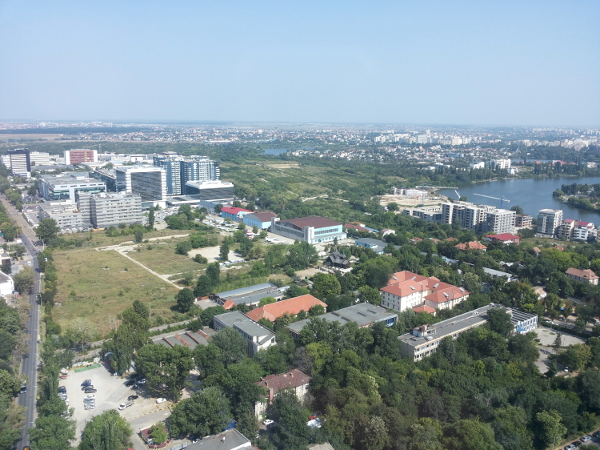 From SkyTower you will indeed have the chance to see the entire city – from its green areas and parks to its gray and colored apartment blocks and old, but elegant houses areas. It may not be the most beautiful city in the world, but I do like it as it is and I am glad that there is such a possibility to admire it from a tall building, especially since there aren’t really tall buildings nearby so you really have quite a perspective.

All in all, even if there is still room for improvements, sightseeing the capital from SkyTower Bucharest is an interesting experience, one that I am recommending you.