Maderira is a lush, green island, also known as “Portugal’s flower garden,” the largest one belonging to the Madeira Islands archipelago in the Atlantic Ocean, just off the coast of Morocco. 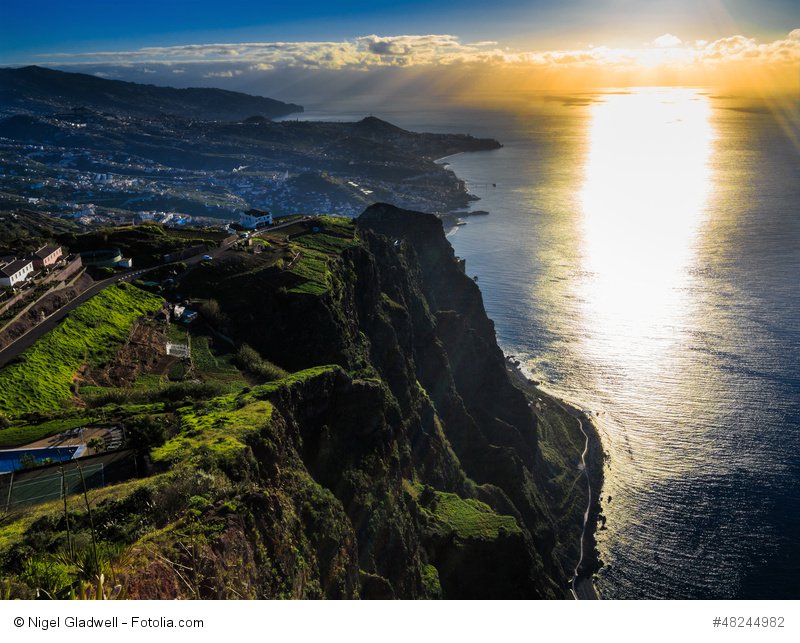 This Island paradais is still part of Portugal and it’s just a few hundred kilometers (or miles) north of the Canary Islands (which belong to Spain). According to the Madeira walkaround guide by EscapeHunter.com, this island is a quiet, green paradise that’s an alternative to those wanting to escape to a peaceful, yet still exotic island. Otherwise said – as opposed to the Canary Islands and the Balearics, Madeira is not a noisy disco nest, but a more quiet retreat area. It has several ancient attractions (fortresses, churches, palaces), while its natural environment is captivating as well.

Madeira is not as visited and not as overcrowded as the Canary Islands, but it’s also a lot cooler and greener. In fact, 80 % of the island is forest-covered. It’s relatively small, but large enough to compare it with several Hawaiian or Canary pieces of land (islands). There’s mountain ranges, gorges and lush green valleys to explore, and obviously abrupt slopes and narrow passages are also characteristic to those areas.

You’ll find exotic pine trees, ferns, but there are no dangerous animals that can threaten you. It’s a wonderful place for hiking. The mountains there reach staggering heights of above 1.800 meters, the Pico Ruivo being the highest of 1.861 meters and the geographical features are incredibly diverse… You just can’t get bored of Madeira. There also are lots of water falls, rivers feeding the land with fresh water and the levada irrigation channels constitute a special attraction that you shouldn’t miss! The exciting geography and beautiful dense forests, are quite often foggy with unpredictable weather and frequent showers, so some caution is in order during those times. That’s the feel of Madeira, according to Escape Hunter.

Places to Visit on Madeira and Things to Do

Nature and human-built attractions are both appealing. The high peaks like the Pico Ruico (which is the highest), the Pico Areeiro (3rd highest) offer splendid views over the island (but fog is frequent). Cabo Girão is the name of one of the World’s highest sea cliffs. Buses will take you to the top and you will be able to look down and admire the fantastic views from 589 m (1,932 ft). Next, the Encumeada Pass in the northwestern part is an especially beautiful and long, wide green vegetation-covered relief form.

All along the way, the beautiful towns of Funchal, Machico, Câmara de Lobos, Seixal, Porto Moniz, Ribeira Brava and São Vicente are just some of the wonderful places for you to visit. Funchal is the capital of Madeira. The largest city is home to well over 100.000 people. Its ancient churches, botanical gardens, festivals and fortresses constitute major attractions.

Funchal’s top attractions mustn’t be missed either: the Botanical Gardens, the Sé Cathedral, the Igreja do Monte (where the last King of Hungary is buried), the yellow São Tiago fort (located on the coast), the Fortaleza Pico (a more massive rectangular fort, situated on higher ground – a great viewpoint to get a glimpse of Funchal), the port (don’t miss it either!).

For those of you interested in tours,  3 popular popular ones are there on Madeira: the western, the central and the eastern tour. Generally the central variant includes the Curral das Freiras area – otherwise known as the Corral of the Nuns/Valley of the Nuns) – a very beautiful area in the heart of the island, where a little town with the same name is located. Escape Hunter also comes to our aid by presenting a short Curral das Freiras trip and a Western Madeira bus tour (the latter being a more through half-day trip in the western parts of the island).

It’s a good idea to pinpoint exactly the places you want to visit before arriving on Madeira, as the density and number of points of interests is pretty staggering.

Either by ship (most popular by cruise ship) or by plane – fly in and land at Funchal’s airport. Lots of low cost carriers and even some airlines arriving from the Americas land here. The best way to approach is to fly in from Portugal. But airports in Spain, the UK and Germany tend to have many direct flights to this tiny green paradise.

The best time to visit is during the warm summer months. September gets chilly and strong winds, bad weather can ruin everything. Don’t underestimate the wild Madeiran climate.

Campspot Publishes the Top Outdoor Travel Trends for 2023
Ideas to Make the Most of Your Visit to Phuket
Trends Say Americans Guarded Over Travel 2022
27 Inspirational Travel Quotes to Fire Up Your 2022 Travel Bug
Previous: Russia: Second-largest gathering of geysers on Earth
Next: Greece’s Piraeus Port Authority Privatization Approved